The Street and the People it Keeps 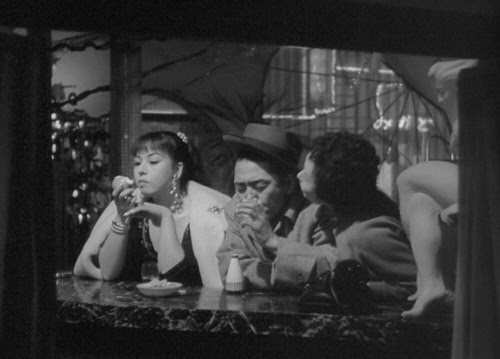 Last night I watched Street of Shame (Akusen chitai), Kenji Mizoguchi's last film. Made in 1956, the movie was quite topical, dealing with institutionalised prostitution in the same year that prostitution was made nominally illegal in Japan.

An ensemble film, the large cast featured the great Machiko Kyo, best known in the west for her roles in Rashomon and Mizoguchi's Ugetsu. This is the first movie I've seen her in where she wasn't in traditional or period attire;

As you can see from the way in which she throws herself on the man who'd been watching her in the window, the prostitutes in the film resort to plainly physical and aggressive techniques to compete with the other girls on the streets for each passer-by's business. Repeatedly throughout the film, the "shame" of the title is most bluntly illustrated by this practice, which is performed by all the woman that form the story's team of subjects for its discussion of the nature and effects of prostitution.

Though Mizoguchi, whose films are known for their marked feminism, comes down very clearly in opposition to prostitution, the film is hardly one sided and he takes pains to present the opposing argument. The madam of the brothel upon which the film focuses talks about how her position had been inherited from a legacy of forty generations, and rhetorically asks why prostitution should have existed in Japan for centuries if it wasn't necessary. The brothel's patron makes speeches to his employees like a politician, countering with his own spin the arguments everyone's been hearing on the radio lately against prostitution, explaining he's a social worker, providing for the women in his employ where the government would not.

And in fact, this is a salient point illustrated throughout the film--two of the women are working to support their families, and when one of them tries to find more respectable employment, she finds there's nothing available paying close to what she needs, and is even advised by the government official to become a prostitute. Some of the women, including Kyo's character, are shown to have become prostitutes in order to acquire independence from abusive families, while the youngest and most successful of the workers at the subject brothel is revealed to have chosen this lifestyle after her father was imprisoned for his 200,000 yen debt, a number which provokes a sneer from the young woman as she speaks as she now regularly earns and cons men out of far more in a single-minded quest to distance herself from poverty.

She's shown constantly collecting on debts throughout the movie, and in fact, every character in the film is shown to either have money owed to them or to be in debt to someone, especially the older and less popular prostitutes. Although Mizoguchi's perspective on prostitution is made plain by the end of the film, the movie nonetheless doesn't present answers as the only logical conclusion that can be derived from the information provided is that prostitution creates permanent psychological damage, but it is a necessary tourniquet for the haemorrhaging produced by the fundamental social and economic problems of the country.

I was reminded of Hideaki Anno's 1998, Love & Pop, which focuses on enjo kosai, or "compensated dated", one of the many practices that has filled the function of explicit prostitution. Considering the more precarious lifestyle of the young girls depicted in Anno's film, one's forced to wonder if regulated prostitution is really the worse alternative. 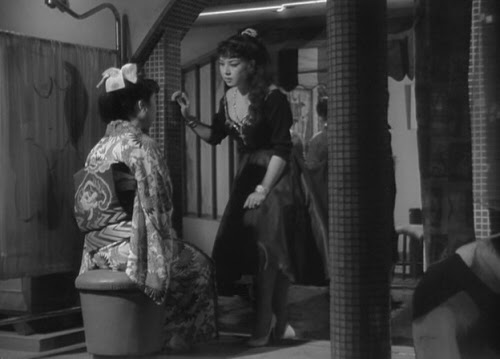 The wrong road is contained in the right one.
Although all paths will lead to Morrissey.
Or the cliffs of Dover with Irene Dunne.
Nothing of which would Gloucester ever see.
Posted by Setsuled at 5:28 PM
Email ThisBlogThis!Share to TwitterShare to FacebookShare to Pinterest