There were some tiny, hard white chips in my mouth to-day, and I realised it was probably connected with the molar on the right side of my mandible that has become strangely sharp edged in recent weeks. I wonder how it happened.

As I was trying to get to sleep on Tuesday morning, the new Boschen and Nesuko script practically wrote itself in my head. But I waited until I'd slept before actually writing it, knowing better than to trust my sleepy brain with words. I'm glad I waited because more came to me and by the end of Tuesday I had a Boschen and Nesuko script I was happier with than I've been with a script in a long time. Of course, how much I like a script has tended to have almost no correlation with the quality of the finished chapter, but at least it's got me happy, and it pushed me to get the page layouts done to-day. So I'm officially one day ahead of schedule on the new Boschen and Nesuko chapter. To-morrow's Thursday, so I think I'll slack off.

Talk about the movie Crash--the real Crash, the one directed by David Cronenberg--prompted me to watch it again last night. I didn't realise how perfectly in the mood I was for that movie until I was in the middle of watching it. I needed something perverse and cool.

At the same time, there's something about it that strikes deep memories of impressions for me. It sort of makes me feel like a kid. It really seems to capture mysterious nights, riding in the backseat of a car, listening to rain and cars outside and seeing blurred brake lights and mist. I find it a very soothing film, all the more so for how cold and unsympathetic it is. 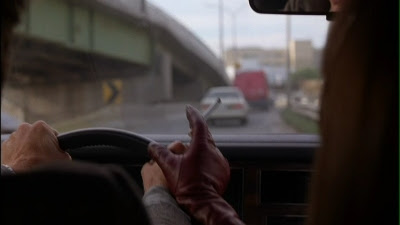 Posted by Setsuled at 4:28 PM
Email ThisBlogThis!Share to TwitterShare to FacebookShare to Pinterest