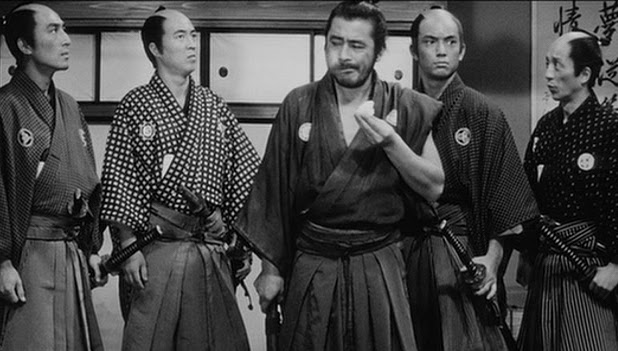 As usual, I've been watching things on the screens. I just a couple hours ago watched Sanjuro for the first time and found it to be a very satisfying experience. I bought it last week as part of Criterion's new Yojimbo/Sanjuro package. I had the old Criterion edition of Yojimbo, but I wanted the new one for its commentary and superior image quality --I watched it before Sanjuro and found it well worth the purchase.

I suppose I neglected seeing Sanjuro for so long because I'd heard it was inferior to Yojimbo, but I guess a Kurosawa movie's still a Kurosawa movie--it's really hard to judge degrees of brilliance for a filmmaker who invariably draws me completely into his films.

It was nice to hear Masaru Sato reprise his raucous theme for Sanjuro from the previous film, and Toshiro Mifune slouching into the group of awkward boy samurais was nice, but it is a very different film from Yojimbo. Where Yojimbo is a dusty, corrupt village and its denizens, Sanjuro is a series of formal rooms and gardens populated by stiff samurai and politicians. There's a more conventional beauty to it, and I loved shots of samurais framed by flowers.

The movie features several actors from the first film in different roles, even recognisable stars like Takashi Shimura and Tatsuya Nakadai. Though Shimura's role as the brewer in the first film was almost invisible and Nakadai both looked and acted almost like a different person. Still, the showdown was inevitably between him and Mifune once again, and very bloody for a Kurosawa movie--and even bloodier for this otherwise bloodless and almost gentle film. There seems to have been more of an attempt to comment on the function of heroic psychopaths in a society as one character refers to Sanjuro as a "sword that is never sheathed" while noting that "a sheathed sword is more powerful".

Let's see . . . I'm about nine episodes into Tenchi Muyo: Galaxy Police. Mostly it's been disappointing, not one episode even resembling the brilliant first episode in terms of writing or animation. But my interest was renewed when I found out the character named NB is in fact a robotic version of Nabishin from Excel Saga, because both series' were directed by Shinichi Watanabe. So I'll stick it out a little longer . . .

Also recently I've watched Young Sherlock Holmes and The Wicker Man, and my thoughts on them may be found here and here, where you can see me being forward with Sonya.

I would also add to my comments about Young Sherlock Holmes this question for all who've seen both that movie and this adaptation of Silver Blaze; am I the only one who remembers Moriarty's first name is "James"?
Posted by Setsuled at 4:31 AM
Email ThisBlogThis!Share to TwitterShare to FacebookShare to Pinterest