I feel like there's going to be a really nasty war with North Korea. Yesterday, Tim told me that North Korea had aimed one of its missiles at Hawaii and that the only reason it didn't get there was that it had mechanical failures over the Sea of Japan. I think Tim misread something, because I can't find any information on it online. Still, I can't imagine Kim Jong Il dying without doing something big and stupid. I'll be interested to see how the thinly stretched U.S. resources are managed when it does become an issue. Isn't it wonderful that we're spending billions of dollars a month to accomplish little or nothing? Sometimes I think George W. Bush is a spy sent in to destroy this country through bankruptcy.

I hope Japan doesn't get destroyed.

The past few nights, I've been watching Azumanga Daioh, which may be the most adorable television series ever created. Of all the anime I've seen, this is the series that reminds me most of Peanuts, maybe because the manga it's extremely faithful to is closer to the traditional newspaper comic strip. Well, and the humour's similar, only much dryer. Dry and cute--that's Azumanga Daioh. 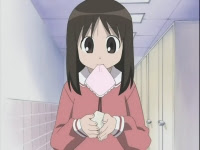 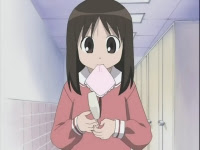 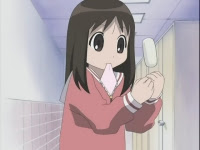 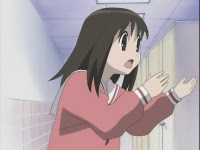 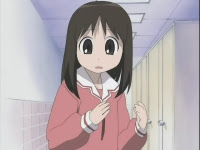 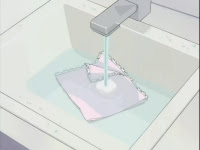 Yep, I finally got a video player with a screen capture function. May whatever gods you worship have mercy on your soul.

(In Japan, one brings their own handkerchief to dry their hands in public restrooms).

It's a decent series. And very well apportioned--one episode a night seems to completely satisfy me.
Posted by Setsuled at 12:05 PM
Email ThisBlogThis!Share to TwitterShare to FacebookShare to Pinterest