The Unaddressed Strangeness of "Evil" 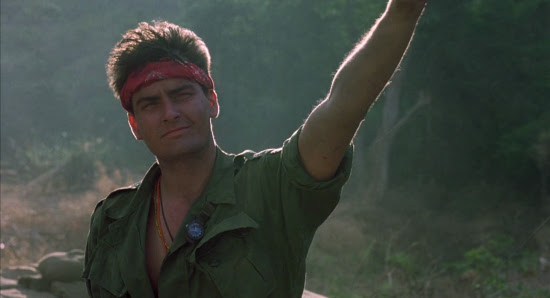 In 'nam, there was no "winning." Sorry, I couldn't resist.

I'm not sure if it's his recent public blowup that made it difficult for me to believe Charlie Sheen's character in Platoon, or if he's just not a convincing dramatic actor. Recent events have certainly proved he has a sense of comic timing, and maybe this is just a case of a comedic actor not translating to dramatic acting. There is a somehow intrinsically satirical quality to his voice over narration, like when he says, "I'm fighting not just for my life, but my sanity." Maybe the writing's not so great, either.

Well, actually it does have an engaging feeling of authenticity. Released in 1986, the Oliver Stone film came out eighteen years after Stone had served in Vietnam. And the attention to things like the endless problems Sheen's character has with insects biting him and the sheer quantity and variety of troubles piling up on the soldiers contributing to their fear and helplessness are given appropriate attention by Stone. Where he fails is in characterisation. Part of it is that he's trying to set up an allegory about the American consciousness, with Tom Berenger's Sergeant Barnes representing the dark side and Willem Dafoe's Sergeant Elias representing what's good and decent about the American soul. 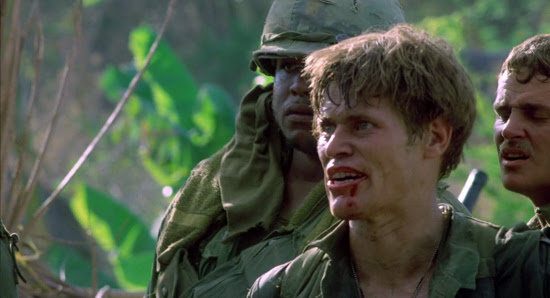 It's ambitious to do this while simultaneously trying to discuss the psychology of American soldiers in Vietnam. Unfortunately, the movie comes out as saying essentially that every man who willingly participated in the killing of innocent civilians was always evil at heart. Stone sets up two factions within the platoon--guys who drink and listen to country music following Barnes, and a more racially diverse group of guys who smoke pot and listen to rock and roll and motown who follow Elias. So Stone seems to be blatantly tying good and evil to liberal and conservative. Maybe conservative guys were more likely to go psycho in Vietnam, but the characters in the movie feel too two dimensional to really represent them. Stone's view certainly has credence for his first hand experience, but writers who consistently write two dimensional characters all presumably have experience with real, three dimensional people too. It seems to me like Stone is or was the sort of person who digested the actions of those around him by reducing in his mind their personalities to simple types. 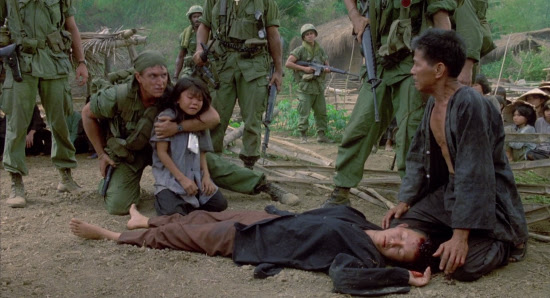 The scene that really exemplifies the nature of Platoon as a whole is the platoon's terrorising of a village, a scene clearly meant to address the My Lai Massacre and American mistreatment of the Vietnamese people in general. Stone attempts to set up motivation for the platoon by showing some of their comrades being killed by booby traps and hidden Viet Cong. But there isn't quite enough of this to explain the mentality that compelled men to shoot women and children. It still works out saying half of the men were Bad Guys and the other half, looking on in alarm, were Good Guys. This doesn't address what happened at My Lai, the horror of which greatly exceeded the events shown in the movie. The incident in the movie comes off as relatively quick, while the massacre involved the deaths of at least 347 people, including women and children. And there was rape and mutilation, all of which would have taken too long to continually cut back to Charlie Sheen and Forest Whitaker standing around looking shocked. What happened with Charlie Company must have been more horrible than Stone had the chops to portray. As such, the movie inevitably sidesteps the issue Stone seemed to be trying to address.

Platoon certainly had its good points, but I can see why it was Apocalypse Now that Charlie Sheen was watching over and over at Sober Valley Ranch.
Posted by Setsuled at 2:09 PM
Email ThisBlogThis!Share to TwitterShare to FacebookShare to Pinterest