A Full and Varied Life 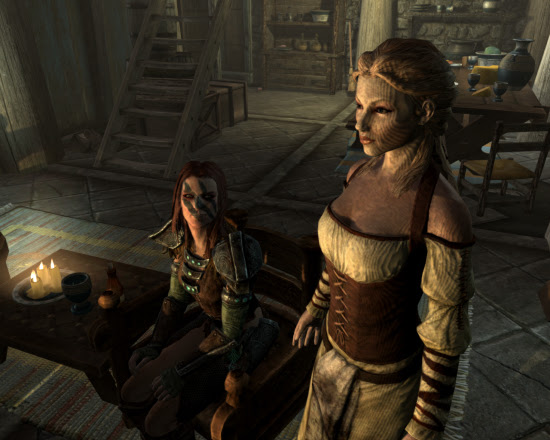 I hearby announce the union of Aela the Huntress and Hanna the Player Character in the bonds of holy matrimony. That's right, two of the digital talking dolls I play with got married. Do please restrain your envy.

So, yes, there's marriage in Skyrim. And not only that, there's same sex marriage, which means the simulated medieval world is in at least one way more advanced than our world. Aela is just one of the many eligible NPCs your character may choose from. I chose her because she's the one who made me a werewolf so I figured I should make an honest lycanthrope out of her. And, well, she threatens people with decapitation in the most adorable way. 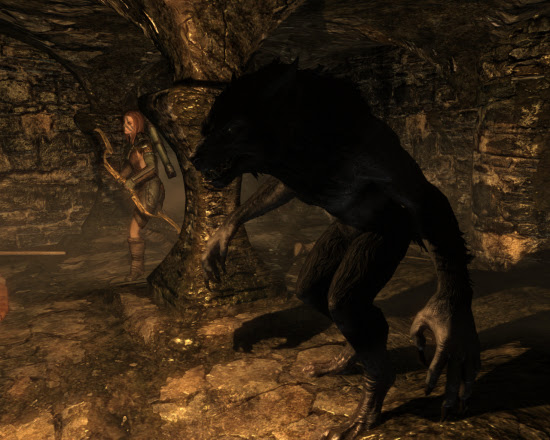 But who is Aela, really? Is she the compilation of somewhat awkward dialogue spoken by Babylon 5 actress Claudia Christian? Or is she the entity possessed by Bethesda's characteristically eccentric radiant AI? Is she the woman who decided to marry my character just because she was asked (after a series of quests with her faction), the discussion amounting to little more than something like, "Then we shall be married," or is she the entity who sometimes gets stuck in a rock, or randomly runs off to kill a small crab with her sword? Because the two really don't coalesce into the same being. Maybe that's why Bethesda prefers to keep dialogue in these games to a minimum. It inevitably feels sort of like masks the nutty radiant AI critters wear. Or like tape recordings of actors' recorded performances hung around their neck like brandy on a St. Bernard. It felt like that with the follower NPC voiced by Sean Bean in Oblivion. At some point while he would be racing around shooting lightning bolts at a spriggan, I'd tap him to get some of that canned Bean goodness.

Your Skyrim spouse moves in with you if you have a house and if you ask them. They also, for some reason, always open a store, even though it doesn't seem like something The Huntress would do, and they make you pay for their merchandise, though you're able to take the money right back from their inventory. It's a weird little game we like to play, I guess.

I can't help wishing it was a little more romantic. They didn't even kiss when they got married. And of course, there's no sex. But then again, the characters aren't exactly interesting enough to warrant that stuff. Though I would like to see what the radiant AI would do if given the option to randomly engage in kissing animations with the PC or other NPCs.

In other news of my Skyrim doings, I've finally started the main quest, which means I get to fight dragons. Which is fun. With dragons being so popular in RPGs and MMORPGs lately, it's worth noting that Skyrim is the first such game where it feels like you actually get to fight them, rather standing around throwing dice with them as in World of Warcraft and Dragon Age. You run around, you aim your arrows yourself, that sort of thing. And by gad, it's fun. Especially since the dragons are so well animated. 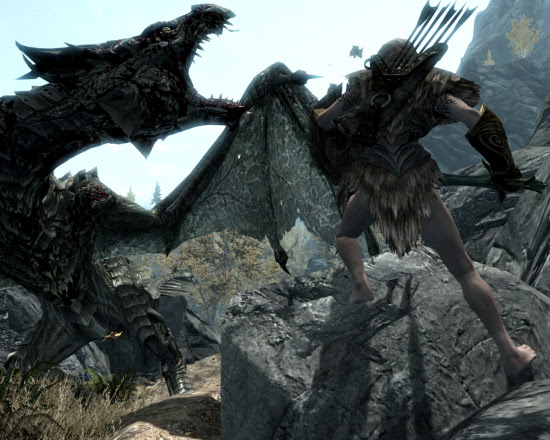 By the way, werewolves are pretty much useless against the dragons. You're able to carry an extra 1500 pounds in wolf form, so when my character got overburdened with the excessive loot one finds in the game, I switched to wolf form and was running the great distance north to Riften, the nearest town, when my trip was cut short by a dragon circling above. If they'd just land and sit still a while . . .

Or if I caught him sleeping, like I did this one; 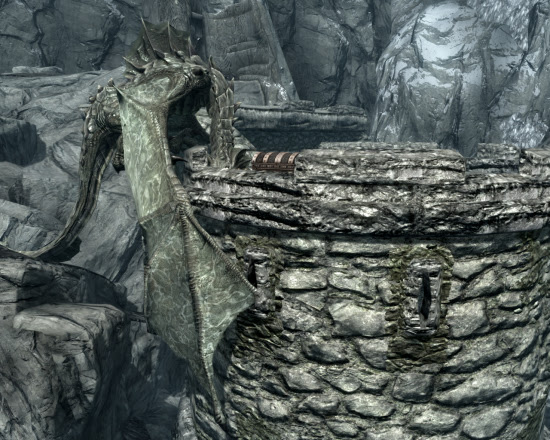 One thing's for sure, dragons have very odd sleeping positions.
Posted by Setsuled at 3:48 PM
Email ThisBlogThis!Share to TwitterShare to FacebookShare to Pinterest