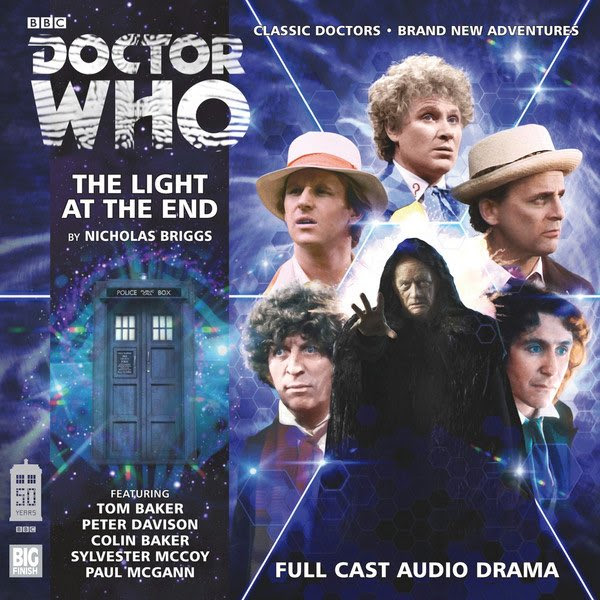 A Doctor Who story featuring five of the Doctors played by their actual actors, one of them being Tom Baker as Four (for real, not archive footage), wins by default. So although The Light at the End, the 2013 anniversary audio story, isn't especially well written, it's still well worth listening to for the Doctor Who fan. It has the added bonus of its writing not being especially bad, either.

Tom Baker, Peter Davison, Colin Baker, Sylvester McCoy, and Paul McGann all appear as the Fourth, Fifth, Sixth, Seventh, and Eighth Doctor, respectively, along with a selection of companions. The First, Second, and Third Doctors are also in the story but played by different actors, their original performers long deceased at the time of the recording. One and Two are both played by actors who'd originally played companions of those two Doctors--William Russell and Fraser Hines--which is fun but neither of them do especially good impressions. Actor Tim Treloar plays Three and he's not especially evocative of Jon Pertwee, either. The first three Doctors spend the story isolated in some kind of time bubble which distorts their voices slightly, like a bad transmission, and I had a lot of difficulty discerning which was which.

The plot involves the Master (Geoffrey Beevers)--a version of his incarnation in The Deadly Assassin and Keeper of Traken--and his scheme to trap the Doctor in some kind of temporal bomb that effects his first eight incarnations, causing his companions to fade and disappear. There are scenes where Four through Eight are together but mostly they work in pairs with Four and Eight bookending the story. Six has a crucial role, which is a bit disappointing. Four is kind of passive as though writer Nicholas Briggs was afraid of doing anything with him but it was fun hearing Four and Eight talk about the former's scarf. Five has a significant segment, a nice scene featuring Nyssa (Sarah Sutton) and a disastrous meeting. It felt like Sylvester McCoy didn't have much to do but Ace (Sophie Aldred) is amusing, calling Six "Joseph" after the biblical character for his coat.

Mostly this is just a story about sorting things out, moving pieces on a big Shuffleboard. The Day of the Doctor was better for getting at issues more personal to the Doctor and creating tension for his decisions but The Three Doctors remains my favourite anniversary story. The story of Omega feels more like it could stand on its own without the spectacle of multiple Doctors. But if you have multiple Doctors in your story, I will always tune in.

A tested green revealed a spinach land.
A wary sprite instructs the pretty star.
Electric tables bring the brain to hand.
A cable lifts the stellar bucket car.
Delivered cups contained a set of clubs.
The empty pocket sought a billiard ball.
A daily speech succumbed to magic dubs.
The echoed thought will paint the violet hall.
A party coloured scroll described a light.
Impatient wings encode the torch's smoke.
A layered ash replaced the pallid sight.
Adjustments made a moth an able bloke.
A phony choc'late clogged confection's pump.
A medley changed a song into a clump.

Posted by Setsuled at 11:33 AM
Email ThisBlogThis!Share to TwitterShare to FacebookShare to Pinterest
Labels: anniversary special, audio play, doctor who, the light at the end