The Image of a Wife 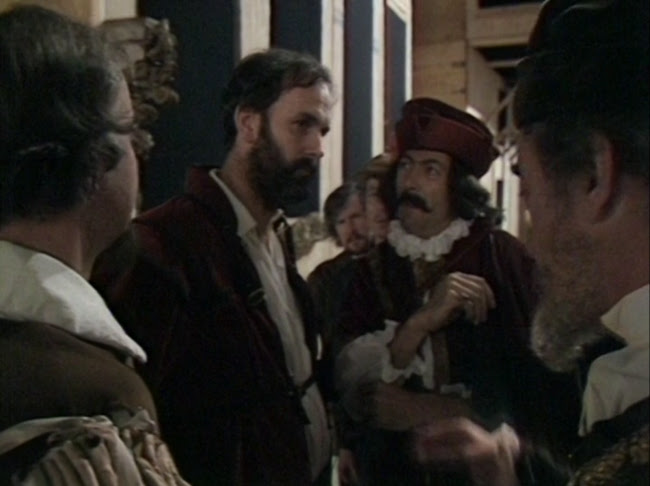 Either I'm starting to warm to Jonathan Miller's style of directing Shakespeare or I just found it suited for The Taming of the Shrew because I really enjoyed his 1980 production of that play for BBC Television Shakespeare. Though the presence of John Cleese as Petruchio is certainly a big help.

Of course, Miller was responsible for Cleese's casting, in fact he fought hard for it despite some controversy and Cleese's own reluctance. From Wikipedia:

Cleese had never performed Shakespeare before, and was not a fan of the first two seasons of the BBC Television Shakespeare. As such, he took some persuading from Miller that the BBC Shrew would not be, as Cleese feared "about a lot of furniture being knocked over, a lot of wine being spilled, a lot of thighs being slapped and a lot of unmotivated laughter."

Miller told Cleese his conception of the character was as "an early Puritan more concerned with attempting to show Kate how preposterous her behaviour is ('showing her an image of herself' as Miller put it), rather than bullying her into submission . . ." And we see this in the production, especially at the very end where Miller has the characters sing a hymn together praising God, directly following Katherine's (Sarah Badel) gratuitous praise of her husband and husbands in general:

Thy husband is thy lord, thy life, thy keeper,
Thy head, thy sovereign; one that cares for thee,
And for thy maintenance commits his body
To painful labour both by sea and land,
To watch the night in storms, the day in cold,
Whilst thou liest warm at home, secure and safe;
And craves no other tribute at thy hands
But love, fair looks and true obedience;

It's a long soliloquy, I've only quoted part of it, and the interesting thing about it to me is that it reflects an attitude that was nowhere in Petruchio's "lessons". How did him telling her the sun was the moon relate at all to him labouring "by sea and land" for her? There's some connexion when he deprives her of food but the main lesson he's really teaching Katherine is on the importance of learning to play one's part, to profit in one's culture by adopting the roles one is assigned. 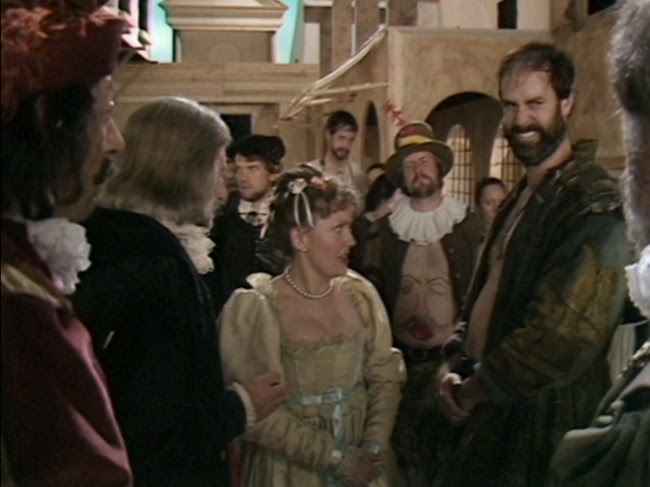 And this is why Cleese in the role works so well. You never mistake his motives for being anger or love, it's all calculated strategy. We know from the beginning his primary interest in marrying her is her dowry--that's why he agrees to marry her before even meeting her. His purpose is to show her how disruptive it is when one constantly asserts one's own will over everything else. In not considering her well being, he makes her stay in his home miserable; by choosing to dress in an unconventional manner at the wedding, he humiliates her. Cleese wears a hat with enormous feathers that constantly bother the faces of those nearby. 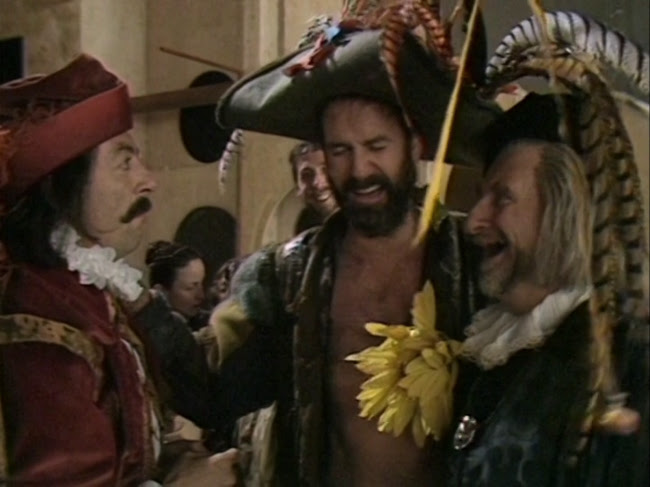 He has a point; Katherine's not only unpleasant for people around her but she's holding up her sister's marriage because her father won't allow the more sought after Bianca (Susan Penhaligon) to marry until Katherine is wed. One could say the real problem is the system that encourages and allows such treatment of women but how realistic is it that Katherine can change the world? You could look at her as a capitulator at the end but, on the other hand, she's helped her husband win a bet, brought in even more money, and based on the dialogue in their first meeting he does seem to respect her intelligence. It's a sad system, but sometimes you have to live with a sad system and you might as well make the best of it.

Cleese is really good and almost as good is an actor named Harry Waters as Biondello, one of the servants, who has a perfectly Monty Python-ish deadpan when he delivers the line, "Forgot you! no, sir: I could not forget you, for I never saw you before in all my life."