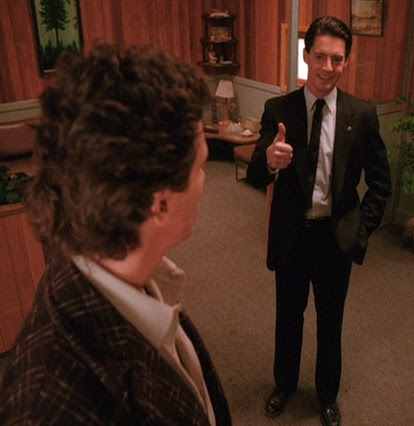 The old clock inside the computer tells me it's my birthday, so I'm twenty-eight years old now. No career path or college degree, yet I am Time's person of the year. And I'm a muthafuckin' blogger, one of the pyjamahadeen--of sorts. So there's that.

I am optimistic about this comic I'm working on. I've shown bits of it to Sonya, and she seems to like it. I bet a comics publisher would be crazy not to take it. Does that satisfy you, birthday god? You never talk to me.

Mostly people're giving me money, though I haven't bought very much yet. I spent ten dollars at Wal-Mart an hour ago on Bound and Dead Alive, and last week I bought the second season of Twin Peaks. That wasn't too ridiculous, I only bought the first season six fucking years ago. And now I hear the seven episode first season is actually pretty hard to find, so I feel for the poor little lambs coming to the show only now. Of course, unavailability of the first season is still nothing compared to the elusive pilot episode. Believe it or not, if you live in the U.S., the best way to watch the pilot, which is the first episode, was, until a few days ago, on YouTube. You can order an import DVD, but the sound's fucked, which of course, as any Lynch-phile knows, ruins a David Lynch film. But the image quality is better than YouTube--I actually tried to sync the two up, using the YouTube sound with the DVD picture, but it turns out the DVD actually plays slightly too fast. So Warner Brothers gets the last laugh as Paramount's release of the show suffers from the pilot's unavailability.

Most of what I've been watching lately has been anime I got for free from Tim--lots of series I fit on lots of DVDs. Most of them not very good. Last Exile, which'd looked promising, turned out to have writing so annoying that I had to stop watching halfway through the third episode or risk reflexively dashing my monitor against the wall. And ten episodes after the wonderful first episode of Tenchi Muyo GXP, the writing took a nose dive. So I just re-watched The Irresponsible Captain Tylor, a series whose brilliance I'd sort of forgotten (it's a component of a much larger post I've been meaning to write for weeks, so stay tuned).

Yesterday I watched the first episode of Code Geas, though, and was very pleasantly surprised. Interesting writing, beautiful CLAMP character designs, and absorbing unpredictability. Lelouch, the pretty male protagonist, actually has character traits apart from being pretty, a teenager, and supernatural. I know, I was amazed, too.

But I think now I'll go to the nightly Twin Peaks viewing. I'm about three episodes in and, although I haven't watched the series in six years, I'm finding it's still written on my brain from my millions of repeated viewings of tapes in the late 90s, especially the Lynch episodes. Though these are much better quality copies.

I'll be accompanied by cherry pie and coffee . . .
Posted by Setsuled at 2:33 AM
Email ThisBlogThis!Share to TwitterShare to FacebookShare to Pinterest