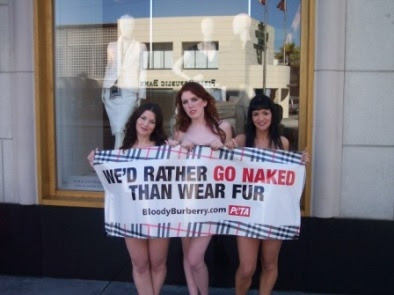 That's a picture from Los Angeles, but I saw something similar yesterday at Fashion Valley mall here in San Diego--I couldn't find photos of that, but I did find video, thanks to the local ABC station. Thanks again, Disney.

I was going to the mall for lunch yesterday with my mother and sister and as we were pulling into the parking lot, I first noticed a clothed woman holding a sign I thought read "Blueberry kills animals", though I found out later the culprit was actually a store called Burberry, who's selling real fur garments. Then, as we were turning into the lot, we saw the nude trio, who were encouraging passers-by to wear "faux fur". I say they were faux nude, since no one could see any of the good bits.

Still, there's something oddly guilt-inducing about naked women standing around in public. I was a little reminded of Isabella Rossellini in Blue Velvet, and I actually felt a little guilty about my fur hat and leather jacket. Though mainly I just felt sorry I'm not getting laid.

Hopefully there're more naked girls in my future to-day as I mean to catch Grindhouse. Somehow to-day I've also gotten a little work done on my comic. Not much, but still, I was sort of expecting to-day to be entirely shot considering there'll probably a good wait at the cinema . . .
Posted by Setsuled at 6:22 PM
Email ThisBlogThis!Share to TwitterShare to FacebookShare to Pinterest