I've got to get my mind off the Valerie Plame thing. I can't help it--I just love the idea that the straw to finally break the camel's back is a complicated story about a female spy. And I so can't wait to see Karl Rove and Dick Cheney squirm on the witness stand (anyone doubting Cheney's perennial dickishness need watch only this.)

But I've got to get my mind on this new project. It's not like I haven't been working on it. I just feel like I could be doing more if my mind wasn't all over the place lately. On the other hand, I think a lot of the day-dreaming I've been doing has been helpful. But there's a lot of bean-counting world building to do. Well, "bean-counting" may be overstating it. I have been compiling material since halfway through last year and I still feel I need more. At least it's starting to feel real in my brain. I think that I've drawn maps and landscapes has been very helpful in that regard.

I think I need to stop changing details about my main characters . . . Despite that, I'm getting pretty solidly behind the central dilemmas of one character. I've always intended the story to centre on two specific characters, but for a long time I thought it was going to be from the POV of one, but now I see the story's definitely from the POV of the other. Figuring that out solved a lot.

I know I'm being vague. But if I had to pitch this, I'd say it's Seven Samurai meets The Picture of Dorian Gray meets The Asphalt Jungle meets Citizen Kane meets Princess Mononoke. Which all makes sense from my POV.

I occasionally feel like I'm over-thinking the setup and have started writing three scripts, each proving to me that I've underthought the setup. But I have a good feeling about the next script.

Anyway, I've of course been watching plenty of movies lately. One I watched a couple of weeks ago, called Sex and Fury, was a fun 1970s exploitation samurai film starring Reiko Ike as a swordswoman occasionally taken to fighting in the nude. There's not very much to say about the movie, other than that it had several surprisingly beautiful visuals, nice action sequences, plenty of nice flesh, and an amazing star in Reiko Ike. No matter how absurd and obviously exploitive things got, Ike always seemed utterly committed to the performance. Closeup shots of her eyes were invariably arresting. 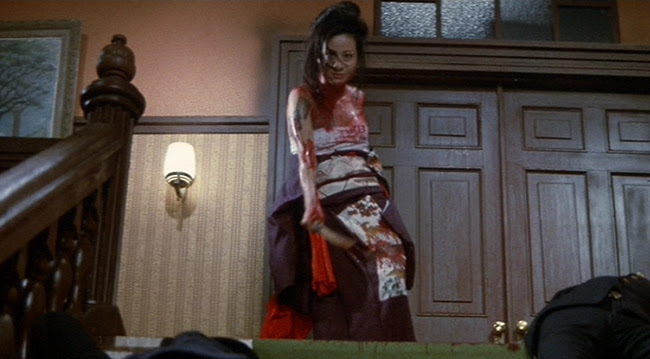 Posted by Setsuled at 7:52 PM
Email ThisBlogThis!Share to TwitterShare to FacebookShare to Pinterest