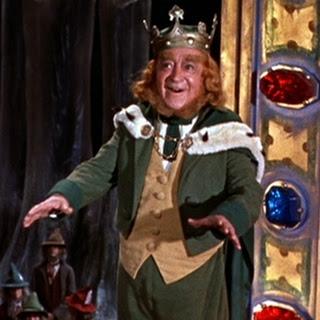 Last night I watched Darby O'Gill and the Little People. It was recommended to me by Sonya, who staked her entire reputation as a poet and her integrity and virtue as a woman on this being the greatest, most perfect artefact of cinema to ever be conceived by human hands and minds. I think she promised to wear Leia's metal bikini for weeks if I thought she was wrong.

Or maybe she didn't. Maybe she recommended it with a few strong caveats, actually. My memory's hazy on the subject. She did recommend it, anyway.

I'd seen the movie when I was a kid, and I barely remembered it, beyond that I was frightened by the banshees. Last night I found it to be a good movie, and I also found that the banshee and death coach sequences are still effectively spooky--as is mentioned in just about every review I've read of the movie.

Although it was made in 1959, Darby O'Gill and the Little People was shot in a 1.33:1 aspect ratio (most Hollywood movies had been shot in widescreen for about six years at that point). This fact, combined with the fact that it was filmed in colour and set in Ireland, all brought to mind The Quiet Man, made seven years earlier. This was somewhat of an unfortunate juxtaposition, as The Quiet Man was shot largely in Ireland while most of Darby O'Gill's exteriors were clearly California. Not that there were many revealing exteriors, as the director, Robert Stevenson, seemed to favour frequent close-ups and even long shots seemed peculiarly close. There's a positively claustrophobic feeling to establishing shots of the village early in the film.

Albert Sharpe is good as Darby, and Sean Connery and Janet Munro are adequate as the requisite, stock pair of pretty lovers, though Connery's huge facial expressions are somewhat off-putting in the gratuitous close-ups.

But the movie really gets on its feet when Darby falls into an old well hidden among some hilltop ruins and finds himself in the leprechaun kingdom. This movie's special effects are extraordinary, particularly considering it was made in 1959. Most of the shots of Darby with the little leprechauns are utterly seamless. No rear projection or process shots were used--instead the technique of force perspective was used, placing Albert Sharpe close to the camera and the leprechaun actors much further away than they appeared. Exactly the same technique used by Peter Jackson in his Lord of the Rings movies--in fact, I was surprised to find several similarities to the new Lord of the Rings movies. A scene later in the film, of Darby finding his daughter injured on a stormy night among the ruins, is almost precisely like the Weathertop Nazgul confrontation scene in Fellowship of the Ring, with Darby standing between his daughter and a looming, sinister cloaked banshee.

Story wise, the movie was good as far as Darby and the leprechauns were concerned. Darby's contest with the leprechaun king has much the tone of a good folktale, and events of Darby's adventures are completely absorbing and fearlessly fantastic. The love story between Connery and Munro was rote, phoney, and somewhat misogynistic.

The movie also featured Estelle Winwood, whose name I only just learned, but looked very familiar to me. Looking at her IMDb profile, I found I'd seen her in many movies, but I mainly remembered her for her small role in John Huston's The Misfits, where she plays a church lady who takes money from Marilyn Monroe as Monroe numbly but fervently attempts to feed salvation.

But, of course, my earliest memory of Estelle actually comes from this.
Posted by Setsuled at 8:14 PM
Email ThisBlogThis!Share to TwitterShare to FacebookShare to Pinterest