So Comic-Con's over again. I have much to tell but I think I'll begin by saying I saw Sailor Mercury bend at the waist. I was behind her.

But that was Saturday. I'll start with Wednesday, which was Preview Night. I didn't have to wait at all for my badge, unlike thousands of poor schlubs who queued up around the convention centre under the cruel Yellow Face. It actually wasn't so hot this year, never getting above 85 degrees, a significant difference from last year's 111 degrees.

At 2:30pm I started walking towards the Con from a sandwich shop I'd stopped at six blocks north of the Convention Centre and I already started seeing people walking past me with badges. The site had said pre-registered people could start picking up their badges at 3pm, but as seemed to happen so frequently at the Con this year, the mob forced things to move a little faster, which probably explains why I was able to get to the event hall at 9:45am on Saturday, fifteen minutes before opening.

The Wikipedia entry says there were two hundred thousand attendees this year, and I can certainly believe it as the masses of people built up around the front of the convention centre were slower and more dense than I'd ever seen at any previous Con. Even on preview night, navigating the event hall was difficult. I didn't hang around that day as I was really just happy to've gotten my badge so early, meaning I could simply walk right in on Thursday morning and perhaps thereby gain some advantage at the portfolio reviews.

Joining me on Thursday were Tim and his friend Amber. We took the trolley, which is roughly an hour trip from Santee to the convention centre. The trolley stops in front of the centre where its track runs parallel to that of an actual train. As I said, masses of people were attempting to move to and fro all day, every day of the Con, and these people had not only to contend with crossing the busy street, but also the trolley track and the train track. We had to wait nearly ten minutes for a train engine with a single car attached to stop in the middle of everyone's path and blow its extremely loud horn several times. The conductor was leaning out the window and he looked familiar. To Tim, I said, "Is that Ben?!"

"It could be," said Tim. "He always wanted to be a train conductor."

And I remembered then how Ben, whom Tim and I knew from elementary school and high school, would ride his bicycle with a small electric light on his helmet, and how, when he'd gotten a car, he'd attached massive, working train horns to it--I think he actually got pulled over for that one. Ben wasn't a talkative guy; he communicated by being annoying.

So when Tim wondered why the train was simply stopped there in everyone's way, I said to him, "It has to be Ben. And he wouldn't even understand that he's pissing everyone off."

During the Warner Brothers presentation on Friday, Kate Beckinsale was about fifteen minutes late because, she said, her car was caught behind a train.

Anyway, after the train backed up--that's right, after all that, it went back the way it came--I was indeed able to walk right into the Con. Tim was buying his badge that day, so he had to wait a long time, and Amber, who'd pre-registered, had to wait ten minutes longer than Tim, which goes to show something. I guess, unless you did it like me and registered for the four day pass and picked it up on preview night, pre-registering has ceased to be an expedient and has become merely a way of getting a badge before they sell out, as they did, for the first time this year.

I quickly found the little portfolio review area and discovered I'd overestimated the number of people who'd be there--there was never more than three hundred comic book artists waiting there at a time. I managed to get my name on the first page of the Dark Horse call list and sat down with everyone else. One of the first things I noticed is that we almost all of us looked the same--guys in our late twenties or early thirties with ponytails. I was the only one with a fedora, though there were plenty of those elsewhere at the Con. The standard issue hat for the aspiring comic book artist seems to be a backwards fitted baseball cap, usually navy blue in colour.

Although I was on the first page of the call list, the wait was kind of excruciating because I had to go to the bathroom really bad. I didn't want to leave because I saw that the few bozos who did, for what ever reason, walk away were skipped over after the girl called their names a few times. So I sat and watched Dark Horse Senior Editor Randy Strandley talking to one guy after another--and one very gorgeous auburn haired girl in a long brown skirt. I don't know what anomaly she came from.

In the Comic-Con schedule, the Dark Horse portfolio review thing read thusly; "Dark Horse editors will be reviewing the storytelling work of professional-level comics artists. They will be looking at consecutive story pages only, with an eye toward storytelling as well as drawing skills. A minimum of five consecutive pages is required. Please bring your most recent work. Artists with cover paintings, inking or color samples, pinups, or sketches are invited to submit work by following the instructions at www.darkhorse.com/company/submissions.php. It is suggested that this review be treated as a job interview."

The sign at the review explicitly requested portfolios from pencillers only. Despite the fact that I've always considered my pencils the sloppiest in the world, I got my hopes up for some reason. I'd printed up five consecutive story pages from Moving Innocent as well as the pencil versions of those pages. Here's the first of the five I showed to Randy Strandley; 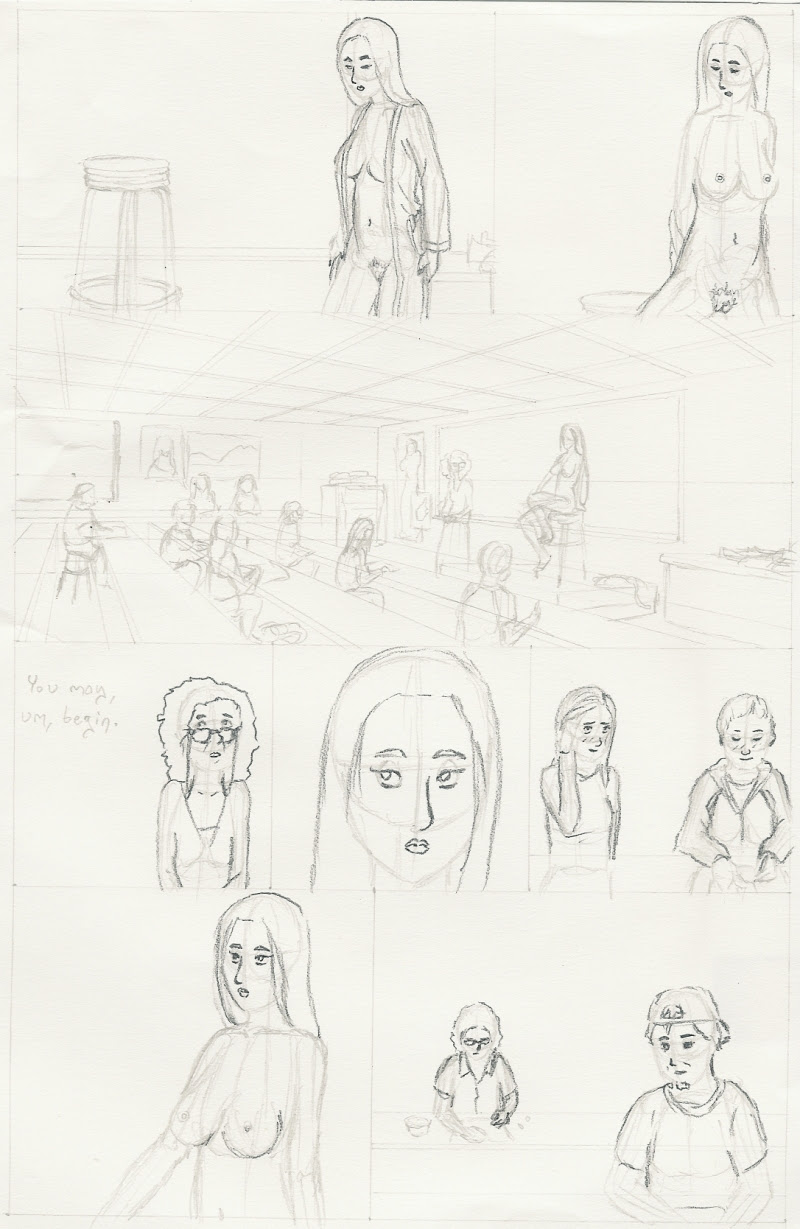 The first thing he said was, "You have a long way to go." He told me to go downstairs to the event hall and look at some original pencils. He said it would be a real eye-opener. I was a little irritated by the suggestion that'd I'd never seen pencils before--I showed him some finished pages from my new project, which, I explained to him, is from the first issue of a five part mini-series I'm trying to get published.

He said that, since I was that far along, I ought to submit it to a contest Dark Horse holds on their site for new creators at certain times of the year. And that was that.

I didn't bother with any of the other portfolio reviews--the whole thing wasn't nearly as useful as I was expecting. The schedule listed only twenty-one companies reviewing portfolios, and most of them were either video game companies, people looking for conceptual artists, or people wanting artists to do specific kinds of imitations. These weren't the publishing avenues I was looking for. So it's back to submitting this new series to comics publishers through the mail, which I've only just begun to do anyway. And if that fails, I'll try self-publishing, something I got a great deal of advice about on Saturday when I spoke to people at the small press booths downstairs. But that'll be another entry . . .

To be continued . . .
Posted by Setsuled at 12:06 PM
Email ThisBlogThis!Share to TwitterShare to FacebookShare to Pinterest