I don't think I got to sleep last night until 7am. I was filled with sort of a stupid energy most of the night--I felt like I was rushing along blindly through everything, while my intellect was somewhere way, far below. And that was before the Wild Turkey--though I only had a teensy, tiny bit of that and it was really only an attempt to slow myself down.

I didn't get very much done yesterday, though it was still a lot more solid work than I'd gotten done since finishing Kim, Kimberly, and the Snake. I've done a lot of work in my head in that time, which I do consider important. But this was the first time I'd put pencil to paper for this particular comic I've been dreaming about, and it was for concept sketches of the main character. This is going to be an ongoing series, somewhat like Boschen and Nesuko. Though I'm not entirely sure of the format it's going to take. Part of me wants to try a subscription service thing, to see if I can finally earn some money at this. Though another part of me says I obviously wouldn't earn enough for a living, so all it would accomplish would be to drive away readers.

I've also been thinking about simultaneously doing a smaller, black and white comic to submit to publishers. "But what about that mysterious comic you've been working on most of the year?" some of you more astute readers may ask. Well, I just received another rejection e-mail for that one. True, that only makes two (most of the people I've submitted to haven't gotten back to me), and the first rejection was actually worded in kind of an encouraging manner. But I've lost all kinds of steam for it. For one thing, it doesn't look nearly as good as Kim, Kimberly, and the Snake.

So I've done some sketches for this new project. I'm in the stage that is really the hardest part for me--world-building. This takes place in another fantasy universe, and I often get in an obsessive loop about how much world building I ought to do, where I ought to begin, and how do I sort it out . . . What kind of personality should this or that have, should this or that even have a personality; if it does, would it strain credibility, if it doesn't, will it be boring, should it be boring, yadda, yadda, yadda. All of which slows things down considerably. But I do find those ideas which are irrepressible tend to be among the best.

Last night, I hung out in New Babbage with Professor Nishi and her cohorts, Artemisia Paine and Jimmy Branagh. Or rather, I followed them around asking questions while at turns being threatened at gunpoint or warned against even sticking around. The Professor had some kind of accident with a pistol and a red blooded phantom in the upstairs of the museum, and then curiously forbade me, or anyone else (though I think I was getting the most stinkeyes last night), from investigating the matter.

After that somewhat disorienting and violent troupe logged off, I spent a lot of time clothes shopping. When I discovered I wasn't about to get to sleep at my regular time, and that I had several kilos of energy to burn, I played some Jedi Academy, where I finally got the model scale thing to work in multiplayer--by default, the game makes all player models the same height, supposedly because to do otherwise would grant an advantage to the taller characters. But it's just wrong to see Yoda the same height as Chewbacca. 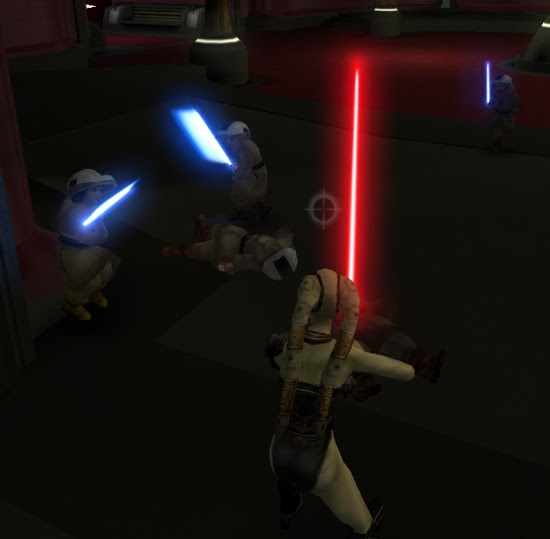 Let's just say I think I beat his score.
Posted by Setsuled at 5:05 PM
Email ThisBlogThis!Share to TwitterShare to FacebookShare to Pinterest