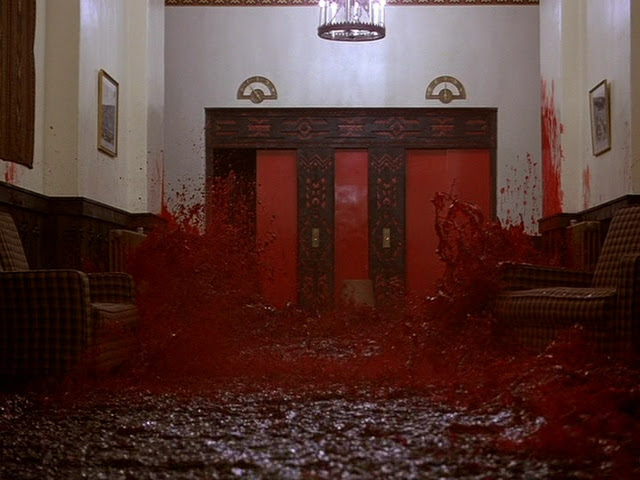 The Shining (1980)
Directed by Stanley Kubrick

Communication is important. A family made up of three people who are on completely different wavelengths spend the winter alone together in an isolated, haunted hotel. Their failure to confront and address one another's most fundamental problems results in massive, internal, psychic haemorrhaging. 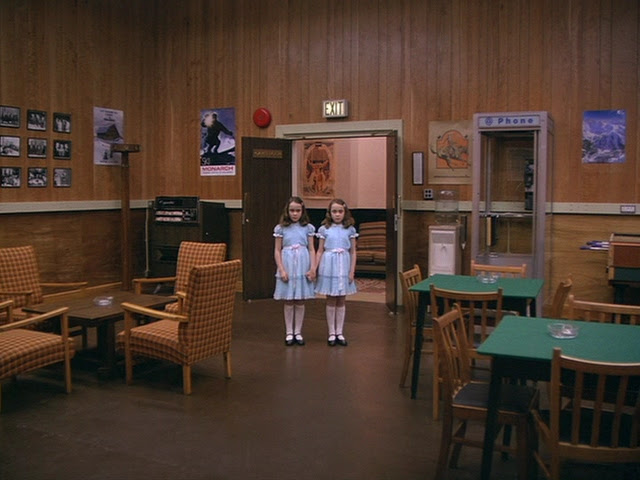 I don't believe the ghosts are exactly hallucinatory manifestations of the characters' emotional problems. If nothing else, Jack's appearance in the 1921 photo at the end of the movie confirms that either the events transpiring onscreen are never literal footage of the actual events, or there is something supernatural occurring. But it is significant that no two of the Torrances ever see the same ghosts.

It seems to me that the ghosts in the movie are simultaneously primal and unnatural. They're entities that exist on the very outer edges of reality, in a zone the human mind normally only traverses when it is left no other course. In the film, we see Jack Torrance driven to this place by an acceptance of the fact that he is evil, according to his own understanding of the concept. We see Wendy Torrance reach this zone when her somewhat meagre ability to understand reality and the way people around her think is completely overwhelmed.

Danny Torrance, their young son, is immediately able to access the supernatural. He possesses an ability referred to as "shining" by Dick Hallorann, the head chef at the Overlook Hotel, who also possesses this ability. It's interesting to note what else they have in common; neither one of them appears to have any psychological barriers between himself and the world. Some might wonder about the large photographs of nude women in the one brief scene we see in Hallorann's home. 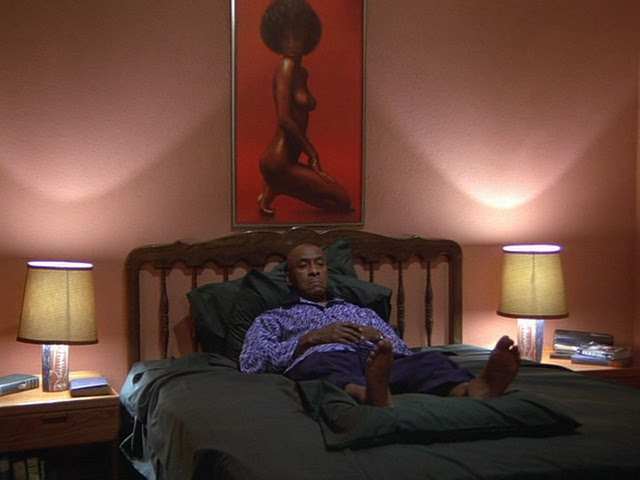 The point is that Hallorann is not ashamed or secretive about any part of his personality. He's comfortable with his nature, both morally and instinctively.

A lot has been made of the fact that Kubrick's movie differs in several significant ways from the Stephen King book upon which it was based, several of these changes having met with King's displeasure, chief among them was perhaps the character of Jack Torrance. In the book, Torrance is a man who is sane and good at the beginning, later perverted by the spirits in the Overlook Hotel. In Kubrick's film, Jack Nicholson portrays Torrance as a bit off right from the start. There's a nice tag team review of the movie on CHUD. One of the reviewers quotes King as saying, "If the guy is nuts to begin with, then the entire tragedy or his downfall is wasted. For that reason, the film has no centre and no heart." King might have done well to remember that the classical definition of tragedy is a story in which a character's downfall is caused or expedited by a flaw present in the character all along. This is why the Kubrick movie has so much more dreadful resonance; when the cause of problems is exterior, if it's a Death Star that can be blown up or an Emperor that can be chucked down a well, then life is safer. But when the fault is in ourselves, and not our stars, then it is more frightening. I haven't read the King book in a long time, but I do indeed remember finding it a much safer experience.

In the movie, we learn that Jack, in a drunken rage, had once broken Danny's arm as he was trying to pull the child out of his way. Wendy tells the story to a doctor early in the film, explaining it was "just one of those things, you know, purely an accident . . . my husband had been drinking and he came home about three hours late so he wasn't exactly in the greatest mood that night . . . and, well, Danny had scattered some of his school papers all over the room and my husband grabbed his arm, you know, to pull him away from 'em. It's just the sort of thing you do a hundred times with a child in the park or in the streets . . . But, on this particular occasion, my husband just . . . used too much strength and he injured Danny's arm. Anyway, something good did come out of it all because he said, 'Wendy, I'm never gonna touch another drop. And if I do, you can leave me.' And he didn't and he hasn't had any alcohol in five months."

This is like the Beast in La Belle et la Bete telling Belle that death is all that poor beasts can expect when all they can do to prove their love is to grovel. Jack accepts the guilt and chooses to punish himself. Wendy, very significantly, doesn't forgive him; she white washes him. She blames the alcohol, and relates to the idea of pulling a child out of the way. Jack's not as sure. 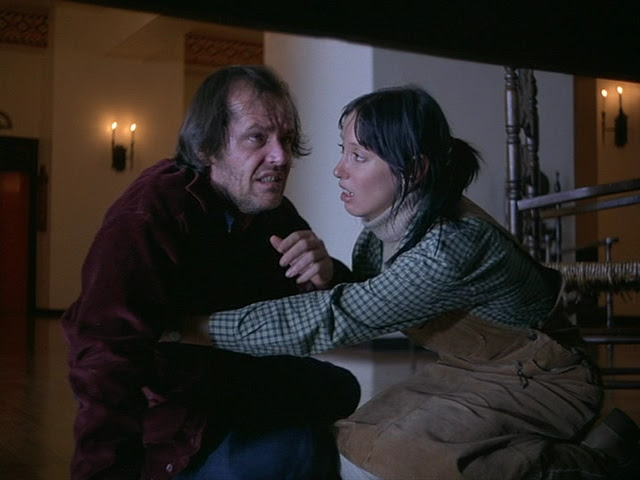 When Danny's hurt by the phantom in room 237, Wendy immediately blames Jack, even though the look on Jack's face says he has no idea how the kid got hurt. This confirms for Jack that Wendy had never forgiven him for the last time he'd injured Danny, and had never learned to trust him. What Jack may not understand is that Wendy had simply repressed her feelings about the issue because she had not known how to deal with them.

It's immediately after this that Jack first encounters a ghost--a bartender in the banquet hall, after Jack says he'd sell his soul for a drink. Jack doesn't seem surprised by the bartender, whom he refers to as "Lloyd" as though the bartender is completely imaginary. Jack never seems especially surprised by the presence of any of the ghosts, and it's this combined with the photo at the end, and the ghost of Grady, the former caretaker, telling him he's always been the caretaker there, that tells us there's something about the Overlook that is Jack.

Jack tells the bartender about the time he did hurt Danny and says, "as long as I live she'll never let me forget what happened." Yet forgetting is exactly what Wendy has been trying to do. Jack is the one who keeps gnawing at it because he never receives the whole hearted acceptance from Wendy he needs. It creates a bitterness that inflects everything he says to her and Danny throughout the movie. That's the craziness King and other critics are referring to. 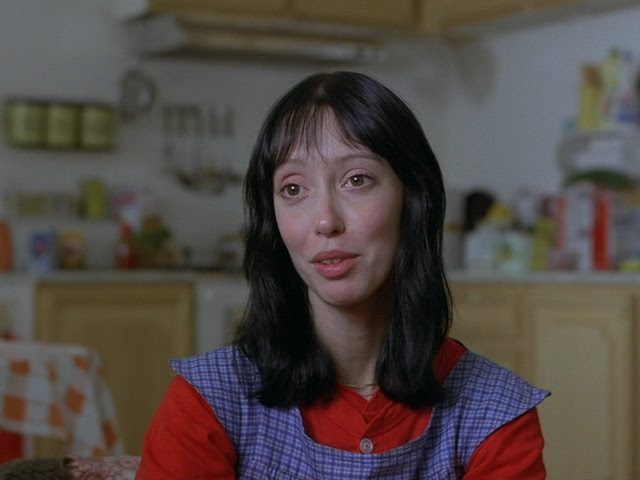 Shelly Duvall plays Wendy as someone with a persistently pleasant personality but who also seems perpetually vulnerable. According to imdb, "King said that he envisioned Wendy as being a blond former cheerleader type who never had to deal with any true problems in her life making her experience in the Overlook all the more terrifying. He felt that Duvall was too emotionally vulnerable and appeared to have gone through a lot in her life, basically the exact opposite of how he pictured the character." Like Jack, the Kubrick version of Wendy is more effective because of what the character brings with her. I didn't sense that Wendy had necessarily been through a great deal in her life. She seems unimaginative, and has a great deal of difficulty comprehending reactions in others that are too different from anything she's ever experienced. Shelly Duvall is amazing in the film, and the complete breakdown she experiences is brutal and vivid when she finds that the novel Jack's been working on daily consists only of "All work and no play makes Jack a dull boy" typed over and over. She's sobbing badly while feebly swinging a baseball bat to ward him off. When she locks him in the freezer, she's still not angry, she's just crying and saying she's "so confused." 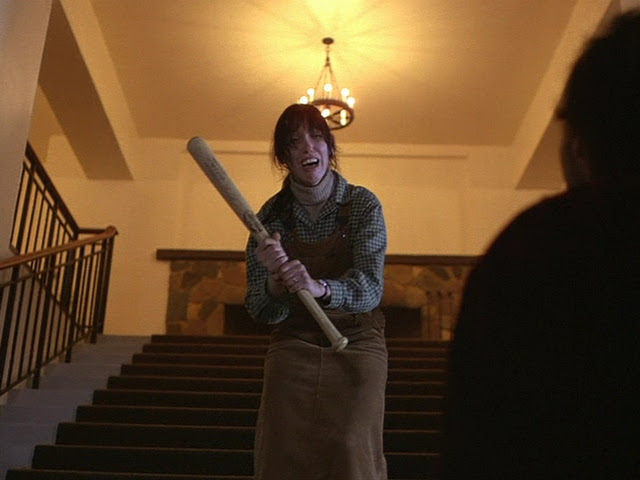 It's obvious why Jack can't write an actual novel--he's still obsessing over his guilt about what he'd done to Danny. Since he can't channel his feelings into the novel, the exercise seems meaningless, and he might as well type the same bromide endlessly. When he approaches Wendy after she's discovered the manuscript, he starts to angrily ask her about whether she's ever considered his feelings. That's a no-go, because she thinks she has; "Yes!" she cries earnestly through her confusion. She'd considered them, but only in terms of feelings she can understand. She has no understanding of long-term guilt. When she'd found out that Jack was indeed not responsible for Danny's new injury, she didn't even think to apologise for accusing him. She doesn't begin to understand why an apology would be necessary. 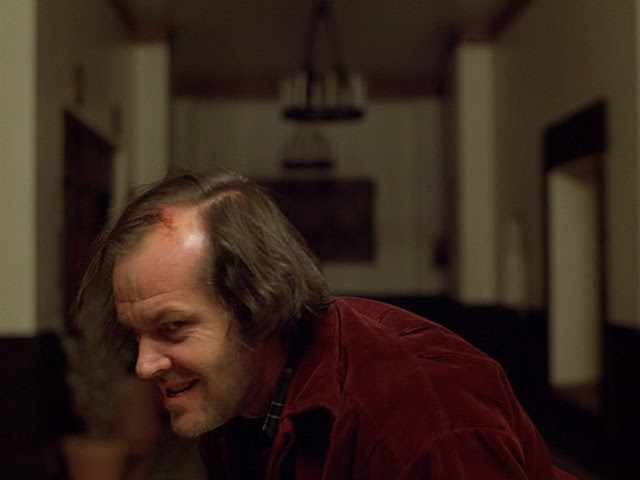 But it doesn't matter as much at this point because Jack has already sold his soul. He's found a way to live with the feeling of guilt, and that's to decide that he enjoys doing bad things. It's easier, too, because he's built up so much resentment for Wendy that the idea of killing her feels liberating. His expressions of love for Danny throughout the movie have all sounded merely like arguments against the idea that he'd want to hurt him. He's never allowed himself to spend time cultivating actual loving feelings for his son, so when he accepts his nature as an evil man, it's easy to try to kill Danny to prove to Wendy that he's beyond the need for the forgiveness she can never give him. He finds more acceptance from the murderous phantoms than he ever would from her. 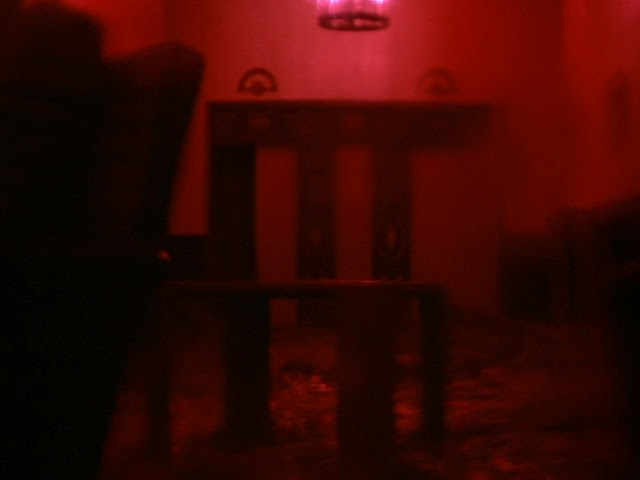 I said before that no two Torrances ever see the same ghost, but actually Wendy does have a vision of blood pouring out of the Overlook elevators that Danny had had earlier in the film. Wendy begins seeing ghosts after she finds that Jack had murdered Hallorann*. The realisation of what her husband had become shatters all of Wendy's devices for interpreting and interacting with reality. Her mind starts to haemorrhage, which is what the Overlook Hotel is all about. Trapped in the hotel, the Torrances are also trapped in their inability to communicate with each other.

*Perhaps Danny's "Redrum" message had been an attempt to prepare her.
Posted by Setsuled at 4:07 AM
Email ThisBlogThis!Share to TwitterShare to FacebookShare to Pinterest