Doctor of the Parliament 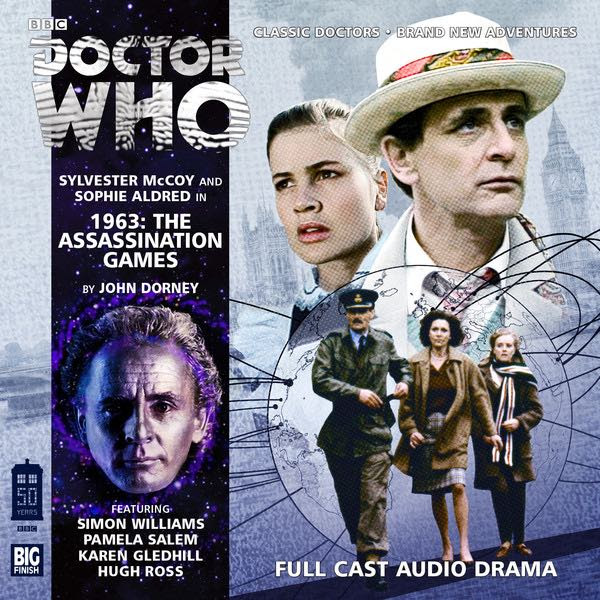 1963 continues to be a busy year for the Doctor in the 2013 Doctor Who audio play 1963: The Assassination Games. The Seventh Doctor proves a natural fit for this entertaining conspiracy espionage thriller.

Neither the Doctor (Sylvester McCoy) or Ace (Sophie Aldred) show up for some time, the beginning of the serial featuring a press conference, an assassination, and some government men deciding what to do about it. John F. Kennedy's assassination is constantly referenced but Kennedy's name is never mentioned for some reason. In Britain dealing with this assassination are people from the UNIT predecessor Counter-Measures. The Assassination Games was one of several audios released for Doctor Who's 50th anniversary so it's fitting that it features an organisation introduced in the 25th anniversary television story, Remembrance of the Daleks, and Simon Williams reprises his role as Group Captain Gilmore from that serial.

There's a lot of misdirection and subterfuge which the story carries off well. Ace turns up as a housemaid and the Doctor seems to have become a Member of Parliament. As is so often the case with Seven, it's never completely clear how much he knows about what's going on. Less characteristic of him is some of the grandstanding he does in this story, giving a couple speeches about adventure and his blue police box that would've sounded much more at home coming from Eleven than the typically more mild mannered Seven. But maybe it was part of his politician role.

Mostly this is a good story. It features a direct reference to the inevitable fact that many years must have multiple Doctors visiting at once and there's an amusing moment where Ace nearly has a motorcycle accident.