Responsibilities of the Doctor 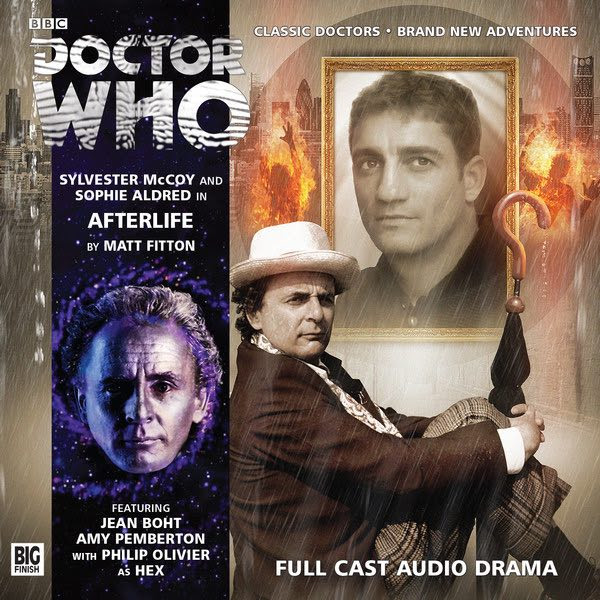 The 2013 Seventh Doctor Doctor Who audioplay Afterlife feels more like a Tenth or Eleventh Doctor story than any audio I've heard so far. It's good, though, and it's kind of nice hearing Seven being taken out of his comfort zone.

Coming after the death of a companion in a previous audio, Afterlife begins with Ace (Sophie Aldred) furious with Seven (Sylvestor McCoy) over what she sees as his callous attitude. He tries to explain to her, as he has explained to many companions many times before and after, that he's gone through this so many times and his perspective as a Time Lord is so different from hers that he simply hasn't the capacity to grieve with the same levels of shock and horror that she feels. He makes an interesting point that, for him, all his companions are always alive and yet also always dead because all points in the timeline are equally real to him.

Of course, no explanation is going to make Ace's feelings go away so she finally talks him into visiting a relative of the deceased. The second and third acts of the story deal with resurrection and gods masquerading as gangsters which is partly airless and partly really intriguing. There's a lot of dialogue about whether the Doctor sees himself as a god, which makes sense considering how manipulative Seven typically is. But he finds himself frequently on the wrong footing as he's forced to deal with the emotions of others--"I keep getting things wrong!" he says plaintively a few times. At one point he's rescued kind of adorably by his occasional companion Sally Morgan (Amy Pemberton).

There's also a nicely sombre moment where Seven plays the spoons early on and a distinctively Elevenish-ish bit of grandstanding at the end which is effective coming from Sylvester McCoy and particularly gratifying coming after an audio where he spent most of the time off his game. Sophie Aldred's also really good, particularly in the early scenes, and there's some really good development for Ace's character.

Posted by Setsuled at 9:54 AM
Email ThisBlogThis!Share to TwitterShare to FacebookShare to Pinterest
Labels: afterlife, audio play, doctor who, sophie aldred, sylvester mccoy