The Changing Life of the Stopped Watch 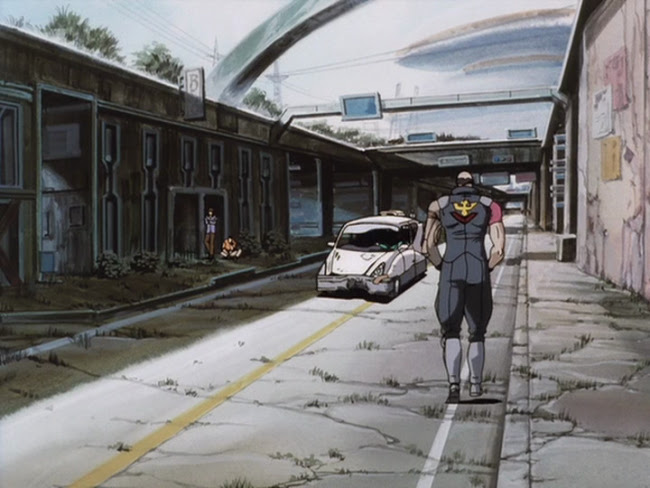 Jet Black is the polar opposite of Edward so it makes sense that the episode of Cowboy Bebop that follows Edward's introduction focuses on Jet. Another unusual character for an anime series, Jet was probably most closely modelled on Jigen from Lupin III. He has a similar beard and both have a somewhat paternal role in relationship to the group but there are plenty of things that make Jet distinct. 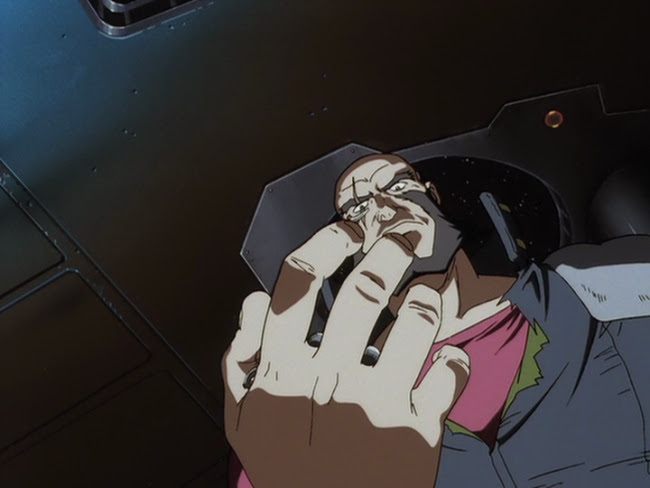 He's basically the dad figure and in some ways resembles characters like Genma on Ranma 1/2, the primary difference being that the show takes him seriously as a lead. How many anime series, particularly nowadays, focus sincerely on a man who's lost his hair?

Among the Bebop crew, Jet (Unsho Ishizuka) is at one end of the spectrum while Edward (Aoi Tada) is at the other. Edward is female, Jet is male; Edward is the youngest member of the Bebop crew, Jet is the oldest. But the most significant opposition between the two is that Edward seems to have no attachments while Jet is almost entirely defined by his past, by loyalty, and by dedication. We learn that his nickname when he was a cop on Ganymede was the "Black Dog" who never lets go once he's bitten. We know, and find out more later, that his mechanical arm represents something significant from his past. He fills his life with work and hobbies that require discipline and long term dedication--he cares for bonsai trees and is the owner ("captain" doesn't seem appropriate) of the Bebop and as such is responsible for its upkeep and customisation. He also performs maintenance on Spike (Koichi Yamadera) and Faye's (Megumi Hayashibara) ships, even after routinely insisting he owes them nothing. He just can't help himself, he has to see things through. 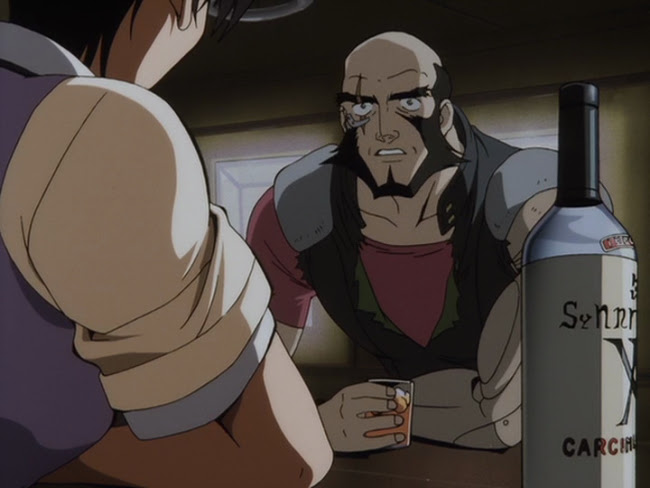 Ganymede Elegy is about his past with a plot that resembles a lot of classic films, most significantly Casablanca. Jet runs into the love of his life, Alisa (Mika Doi), who now is in love with a man named Rhint (Kappei Yamaguchi) who's on the run. Alisa has moved on but Jet of course hasn't, as symbolised by a broken pocket watch he carries. 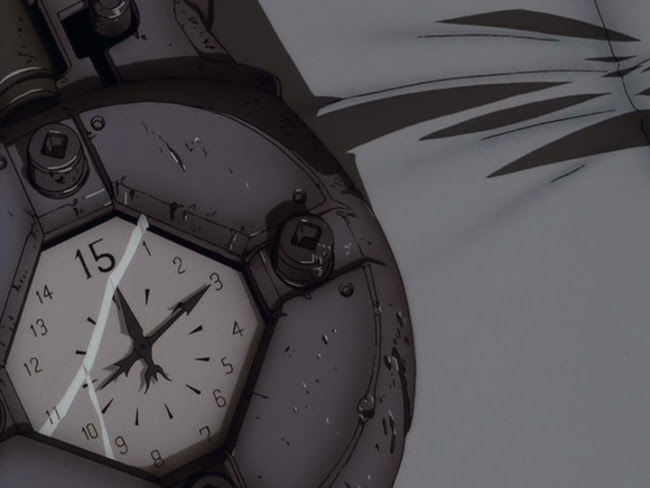 With fifteen hours, presumably because that's how hours are divided on Ganymede. It's a nice detail and another thing that ties Jet to the past. As usual, this episode is filled with nice little off-hand bits of imagery that speak volumes. I love the shots of Spike trying to track down Rhint, especially this one where he's blocking traffic with his ship so he can question some guy on the street. 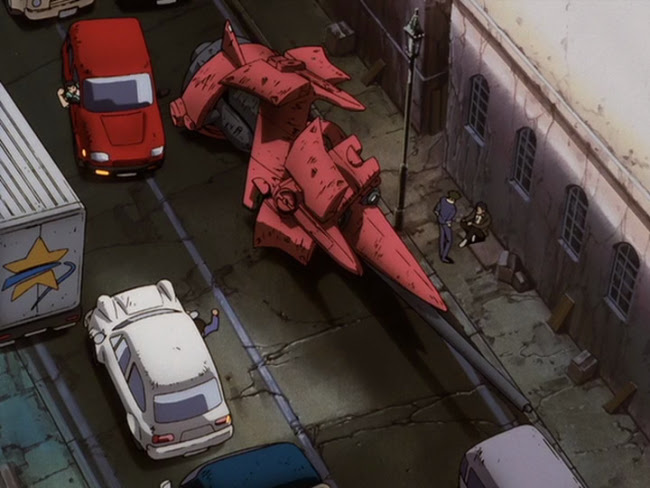 Faye spends the episode doing fan service. She decides to sunbathe on the Bebop--I love how she doesn't stir when Spike flies by overhead. Along with a delicate leg chain, the tiny, barely audible grumble from Megumi Hayashibara gives the viewer a sense of very close physical intimacy. 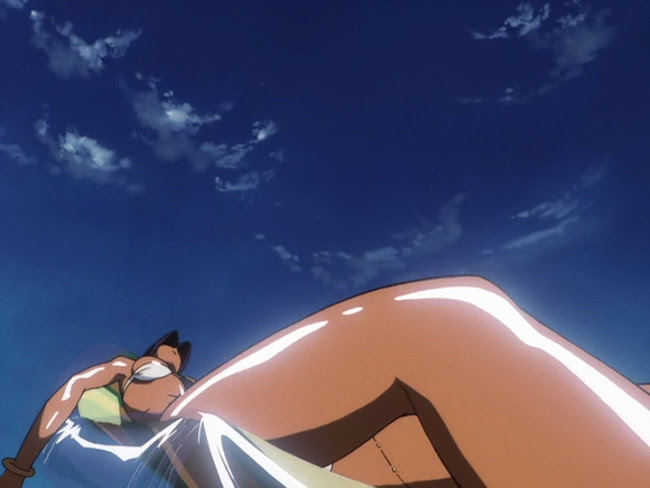 Meanwhile, Edward is fishing and we see on Ganymede the local fish have developed means of thwarting capture. 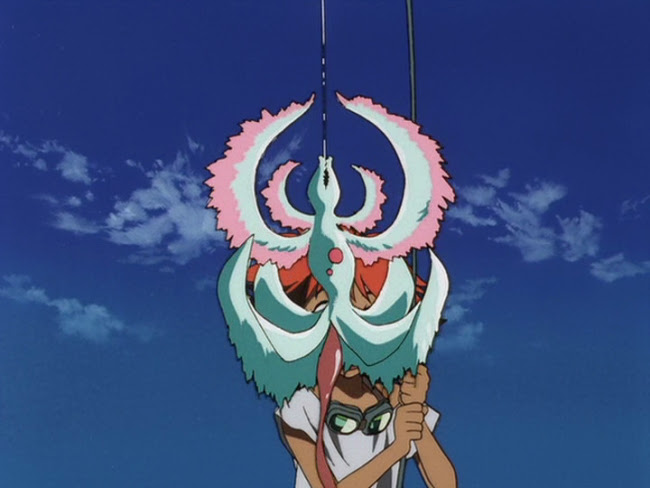 The character design for Alisa is a little disappointing, she looks basically like a default mature anime lady. 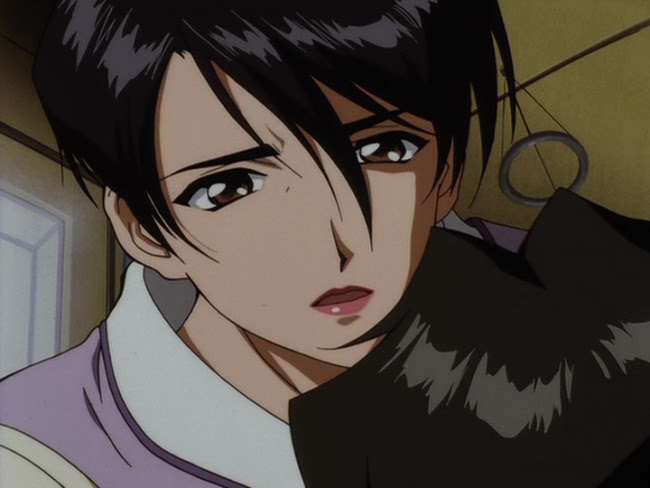 The climax of the episode involves a stare down where Jet essentially challenges Alisa to prove that she's completely let go of all attachment to him. There's a sociological element to their relationship--Alisa talks about how being with Jet basically meant doing what he said and looking up to him as almost a fatherly figure. Her relationship with Rhint is almost the opposite--she's clearly the one in charge and Rhint, who can't control his panic, seems like a child. Of course, Jet and Alisa don't end up getting back together so this seems to be one thing Jet is finally able to walk away from. But maybe he achieves some satisfaction in finally knowing he still meant something to her. 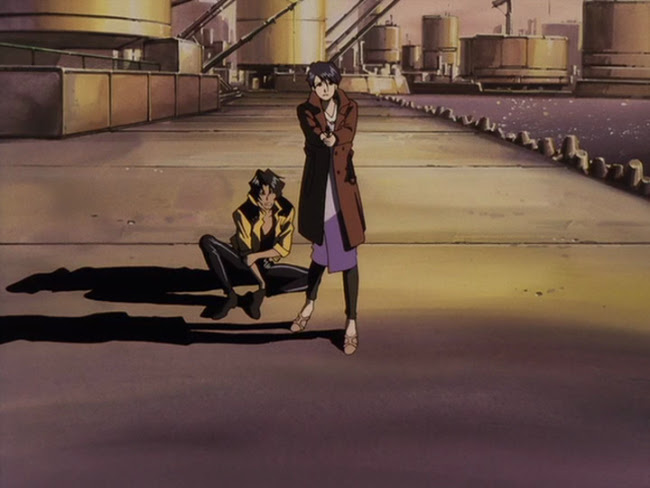 This is the first episode where we delve into Jet's backstory much at all and it's ten episodes in. But it's completely appropriate coming at this point, partly because of the shift in perspective that grows as the series progresses, from one that presents chaos to one that presents reverence for consistency, but also because it allows us to get to know Jet on the terms of his present actions and decisions without being defined by who he was. Though in Jet's case, that's of course integral to his present.