I just rolled sixty three dollars worth of coins. And that's not even half of all the coins I have accumulated. Mostly I've been digging through a basket I've had for years wherein I found ticket stubs buried under layers of pennies; one for a 2002 Morrissey concert, one for Russian Ark, one for when I saw Wild at Heart at the wonderful, now long gone, Madstone cinema on March 9th, 2003.

And why am I plumbing the depths of my embarrassing accumulation of loose change? Well, remember how I said I had exactly enough money for my car's new tires? Well, turned out I was four dollars short and my checking account charged me thirty dollars for the overdraft. Plus, my payment for Live Journal's due on Sunday, and New Year's Day seems to've fucked up the mail, so the money I normally receive from a grandmother isn't showing up. So I've been a sub-loser for almost a week, but I feel good knowing I've pulled myself up by my bootstraps back to my loser level.

I keep thinking, "Man, what if I'd walked away from the Blackjack table just one hand sooner?" Oh, well. It's fate, I guess.

Two nights ago I watched Funny Face. It was a decent movie. Fred Astaire was still fantastic at 58, seeming as though he walked right out of a movie from the 30s--his style and everything about him was an unconscious anachronism, except maybe for the dopey cardigans and ascots he wore. Audrey Hepburn's cute as a button, and even the fact that she can't quite sing is kind of cute. I don't know if she's much of a dancer, but it's hard to tell because she's definitely a charming dancer. Gawky and elegant at the same time, which is pretty much the essence of Hepburn's charm. I see Cyd Charisse was originally up for the role--something I suspected all through the movie--but although Charisse would've been a better dancer, it's Audrey Hepburn who has the real funny face.

There were some annoying beatnik caricatures in the movie, but I find that's something I often have to put up with from Hollywood movies of the late 50s. There seems to have been a real resentment for the new culture, even as there was an attempt to adapt. Hepburn dancing in the club in black sweater and slacks and Astaire dancing with the unexpectedly great Kay Thompson, are nice sequences, but exist way off in their own dimensions.

The movie has some really great visuals, my favourite of which were the scenes taking place outside this small church; 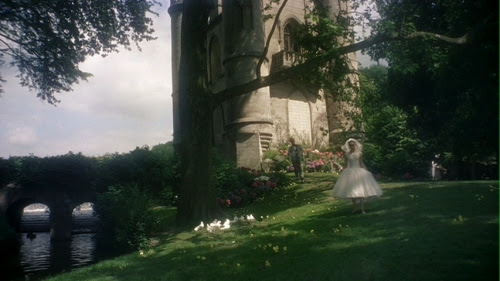 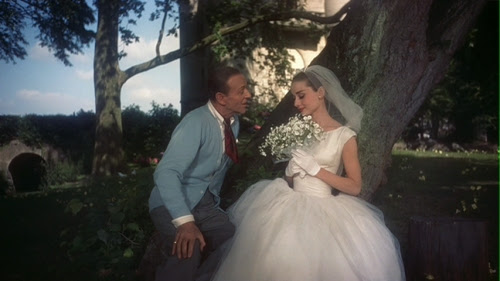 It's like something right out of a fantasy movie. Just really gorgeous.
Posted by Setsuled at 7:46 PM
Email ThisBlogThis!Share to TwitterShare to FacebookShare to Pinterest