Last night I dreamt I was in the Black Lodge--which is the red curtained area Agent Cooper first sees in his dream on Twin Peaks;

I dreamt I was going through one of the curtained halls when I came across someone who looked like Peter Sellers as Dr. Strangelove, except he could walk and he was much taller than me. He didn't say anything, but he was sneering at me and holding his hands out towards me. He was wearing white gloves. I knew he wanted to strangle me.

Olfactory! Olfactory! You need it, don't you see? 'Cause you're a fella, I can tell, who could really use a sense of smell!

Anyway, here's what my female avatar looked like as of last night; 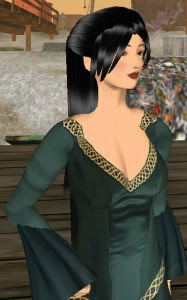 Yeah, I slimmed her down. There just aren't many clothing options otherwise. Plus, whenever she put her hands on her hips, they disappeared inside her.
Posted by Setsuled at 6:09 PM
Email ThisBlogThis!Share to TwitterShare to FacebookShare to Pinterest