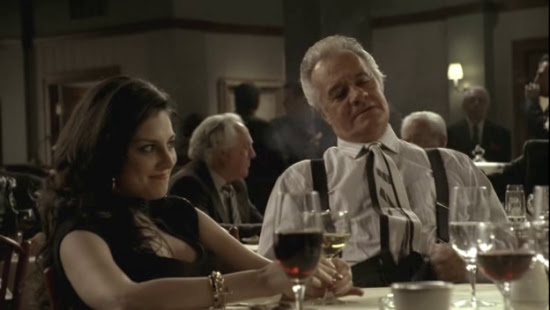 I had a dream last night about what happens after the infamous cut to black in the series finale of The Sopranos. I dreamt Tony gets shot by the suspicious guy in the member's only jacket in the diner but then time reverses and starts again before Tony's shot. Paulie comes in and shoots the guy before he can get Tony. We then learn that earlier Tony had taught Paulie the technique for reversing time through mental concentration. I think maybe the scene where the two of them were talking about their superstitions--and Paulie's fear of cats--earlier in the episode led up to it. 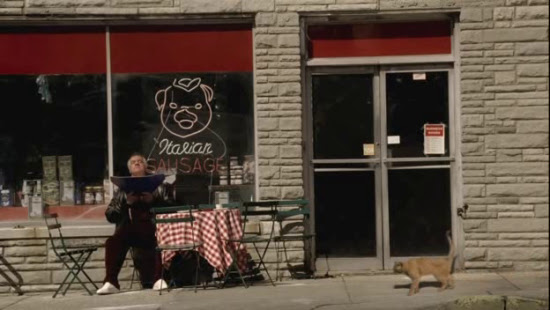 After Paulie saves Tony and his family they go to a small, out of the way apartment complex to hole up. Leaving the Sopranos in one room, Paulie goes to another room where a couple guys are staying who each owe him 445 dollars exactly. "Where's the money?" he asks. The guys point to a shelf by the door where Paulie finds a wallet containing two 445 dollar bills. "I didn't know they made 445 dollar bills," says Paulie, incredulous.

The two guys, in their twenties, are playing cards and one of them says offhand and irritated, "They make any kind of bill you want at the bank. You just ask them."

"Holy shit." He takes the bills, goes outside to meet with the 8 year old daughter of one of the soldiers for the Soprano family and they get in Paulie's car. As they're pulling out into traffic they get in a minor car accident when a slow moving car hits the side of Paulie's car. Paulie gets out to talk to the guy but his vanity isn't satisfied with how he handles it so he reverses time back to before he collects the 445 dollar bills. The sequence begins to play out over and over again as Paulie vainly tries to enact the events in a way that impresses himself. Sometimes he and the little girl ride a bicycle instead of a car but the accident never seriously injures them. 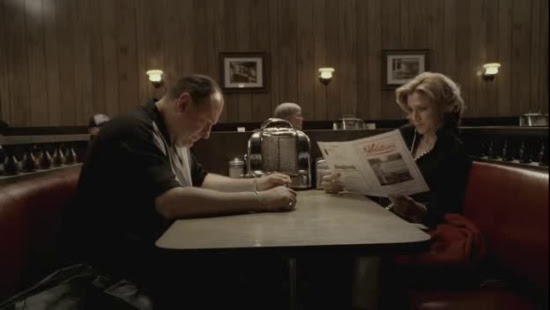 So yes, last night I finally finished The Sopranos, a show I started watching in July 2012. Finishing The Sopranos almost took me as long as finishing Doctor Who--The Sopranos comprised of 86 episodes and Doctor Who being 800 (slightly less than that when I was catching up with the show). I went through the first five seasons fast enough on The Sopranos but the final season just seemed completely limp most of the time. Tony in his coma dream world at the beginning of the season was a tangent that went nowhere, essentially just an opportunity for Gandolfini to show he could play another character. After that, the show just seemed to tread water. The story about a gay member of Tony's crew was kind of interesting but things didn't really pick up until the last few episodes when main characters started being killed off.

The Wikipedia entry for the final episode summarises a number of fan theories and includes statements from series creator David Chase regarding the ambiguous ending. Although it doesn't really make sense since Tony had made peace with the New York family, I'm inclined to be with the camp that says the cut to black was Tony being killed. I think it's ironic Journey's "Don't Stop Believin'" became so popular in the wake of the episode because I think the song was used specifically for its vapidity. To reflect the lie of Tony's conception of his life as working and stable.

I think the reason Chase left the ending open to interpretation was that neither possibility interested him--Tony getting killed feels like a trite moral, Tony's mostly happy lifestyle continuing as it has seems unrealistic. There's plenty of trouble foreshadowed in the episode--Carlo testifying to a grand jury, Uncle Junior's pathetic end in a state nursing home despite having run New Jersey with Tony's father. But considering legal troubles and mental health troubles have been problems Tony has faced and essentially overcome throughout the series, suggesting they might be issues again in the future hardly says anything conclusive.

There's a message that emerges incidentally in The Sopranos that I don't think Chase was comfortable with. The reason attempts to enforce moral rebuke on the show's gangsters in episodes like "Employee of the Month" feel so awkward and artificial is that Chase, the other writers, and the actors did an extraordinarily good job of humanising the Mafia family. The truth we see is that for the most part these guys lead lives that aren't any worse than the next man's. They don't just legally get away with murder, their sociopathic consciences let them get away with it, too.
Posted by Setsuled at 9:41 AM
Email ThisBlogThis!Share to TwitterShare to FacebookShare to Pinterest