In the parking lot just now I saw two average looking "bro" type college guys walking together--the droopy shorts, t-shirt, backwards baseball cap, arms always held slightly away from their bodies as though over an invisible fat suit, the whole bit. Then they stopped walking and one of them knelt down to tie the other's shoelaces. I'm not sure what was happening there by maybe they weren't as homophobic as they looked.

I hear one of the problems the film is experiencing is that it's drawing a largely conservative audience. I'm sure many of them don't see exactly what debauchery has to do with Wall Street.

I also failed to mention Joanna Lumley's wonderful role in the film as the English aunt of Jordan's second wife, playing in this movie essentially a much more fascinatingly subtle version of the character she played in Absolutely Fabulous. Though I had seen her just the night before when I watched, on 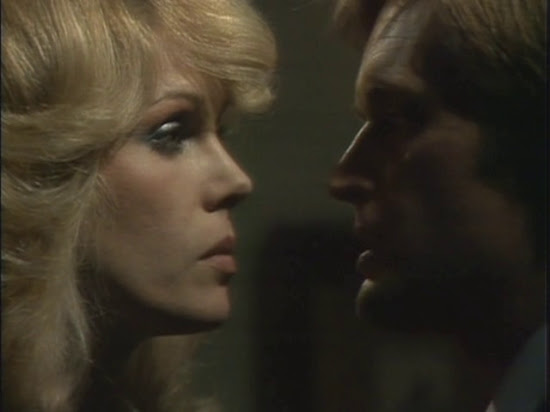 She costars with David McCallum as a pair of possibly extraterrestrial beings with psychic powers named Sapphire and Steel. I've watched the first two episodes now, which constitutes a third of the first serial. So far I like the show, the story is a nice, spooky tale about an amorphous malevolence causing timelines to intrude on one another, triggered by nursery rhymes. Two children guest star in the story whose parents have been swallowed by a room.

Elsewhere and more recently in television, I watched the disappointing premiere episode of Sherlock season three. As I predicted, the explanation for Sherlock surviving his death was thoroughly lame. Steven Moffat handing the episode to Mark Gattis to write is sort of like Andre the Giant asking Wally Shawn to lift a bus. On top of that, Sherlock and John constantly behaved out of character just to deliver jokes. Though, in a way, I'm glad they got the Gattis episode out of the way first. He's one of the three co-writers on the second episode but at least Moffat is involved on both two and three.

Far, far more impressive was the season finale of Monogatari which I watched on Sunday. 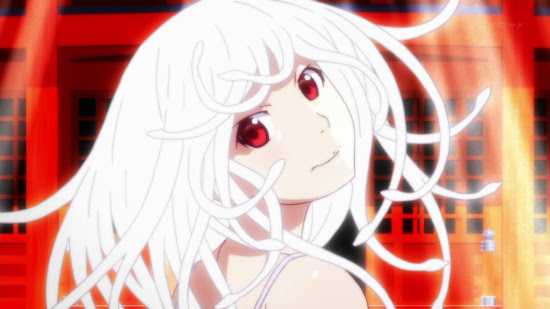 Wow. The conclusion of the Nadeko Medusa arc was so much better than I could have hoped for. I loved how real creativity, the kind you "don't even tell God about" is shown to be almost the opposite of Nadeko actually becoming a god. That this madness from power was tied to her obsessive, delusional love for Araragi through which she didn't think it strange she also wanted to murder him was even better.

And the character Kaiki, who I found so annoying in Nisemonogatari--by the end of Monogatari I was in love with him. Partly it's just his cool, slightly melancholy, slightly just bored delivery is nicely at odds with the more emotive characters. It's so rare to see a truly adult character even in good anime. 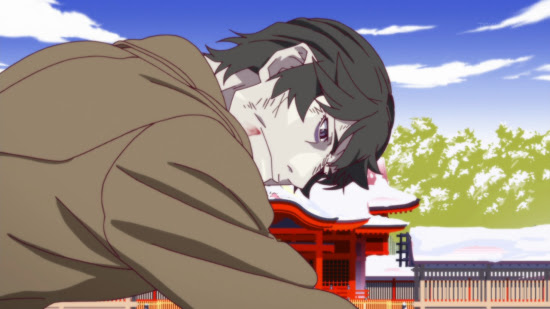 I got up at 6am to-day--my new class schedule demands it. Thanks to some confusing and contradictory advice from counsellors, I didn't even know what classes I was supposed to sign up for until after most of them were filled. The only time available for one of the classes I need, a second anthropology class, was 9am. Which, considering I live across town now and I still have to park off campus, means I figure I need at least a three hour start.

I was going to reinstall The Secret World last night--Caitlin's playing it again so I thought I might, too, until I remembered the game takes forty gigabytes, I only had forty-six available, and I bought the game through Steam which means all forty would have to download before I could play anyway, something Steam predicted would take a day and a half during which time my internet usage would be limited if I wanted to give decent bandwidth to the thing. Meanwhile, Guild Wars 2, a much prettier game, only takes up seventeen gigabytes.

I played some Guild Wars 2 last night--I almost couldn't stop myself. I got caught up protecting some fort that kept being retaken by bandits. The game just feels so extraordinarily organic compared to other MMORPGs.
Posted by Setsuled at 4:37 PM
Email ThisBlogThis!Share to TwitterShare to FacebookShare to Pinterest