I just rescued a baby lizard from the kitchen. I don't know how he'd gotten there, but he barely moved when I tapped him once. I put him in the backyard, in sunlight. I hope he recoups.

A lot of activity in the backyard to-day. I saw the grey cat through the window while I was making coffee. She looked a bit thinner than the last time I saw her, when she'd already been looking thin. I'm worried she belongs to the same people who didn't feed their orange cat last year--my aunt had taken to feeding her in secret, despite the disapproval of my grandmother, but the orange cat had eventually vanished entirely, probably having been eaten by a coyote. Why do people buy cats just to condemn them to a slow death?

I went outside to see if I could pet the grey cat, but she doesn't trust me yet. I crouched a distance away, hoping she would approach me, but the doorbell rang, and when I'd returned, she was gone. I may put some food out for her, but I want to be able to watch her eat it since there are about a million other things around here who'd eat any food I might leave out.

A few minutes later, the white cat was waiting outside the door, so I went back outside to play with him a bit. He looks perfectly healthy and happy, and quite comfortable with my attention--I'm not worried about him, as I know that the humans he lives with are very nice. He and the grey cat had seemed to be sweet on each other, so I hoped he'd find her to-day and at least she wouldn't be lonely.

Yesterday was a day off, as I've finished with chapter 3 and I want to wait a couple days for chapter 4 to percolate properly. But I ended up being unsure of what to do with my time yesterday--I started watching Yojimbo, but watching movies in the living room lately has gotten almost impossible now that there's a noisy clock and my grandmother and her boyfriend are blasting country music most of the day. So I came back to my room and read the first thirty pages of Stephen King's Rita Hayworth and the Shawshank Redemption, which I'm enjoying so far.

Finally, I made a vodka martini and signed onto Second Life at 11:30pm, thirty minutes earlier than I normally permit myself. I ended up spending four and half hours in sl, more time that I've spent on it since Caitlin and Spooky stopped speaking to me. I promptly lost a game of chess to someone I'd just met who was using a child avatar, then I wandered about, getting pictures of some of Toubanua's new outfits, before Natalie came online and we had adventures. Pictures; 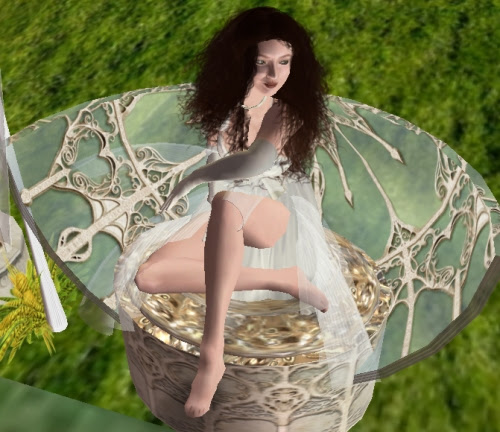 Who wants a hot cup of Tou? 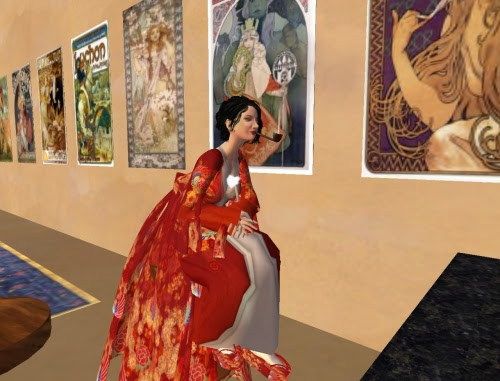 Nothing like a good pipe. I think the stools are a bit far from the bar, but this place gets points for the Mucha posters. 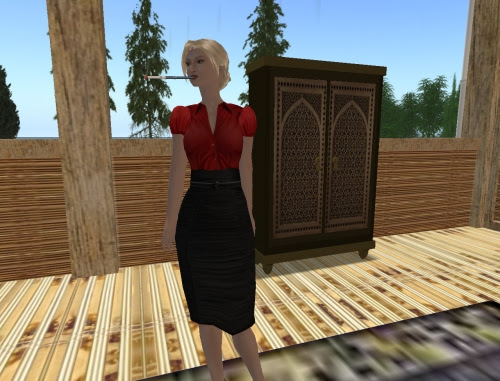 I love this armoire. 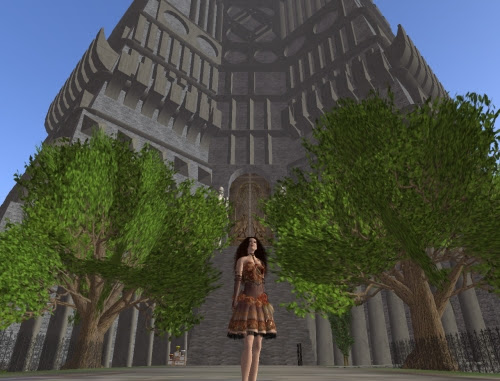 Orthanc! Inside there are shops and was actually a bit disappointing for such an impressive construction. 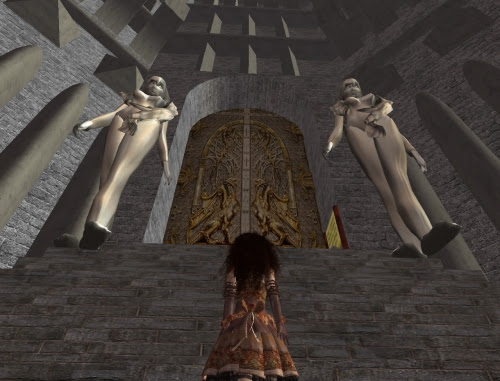 Impressive door, though I don't remember the statues in the movie or in the Alan Lee painting that had inspired Orthanc's movie design. 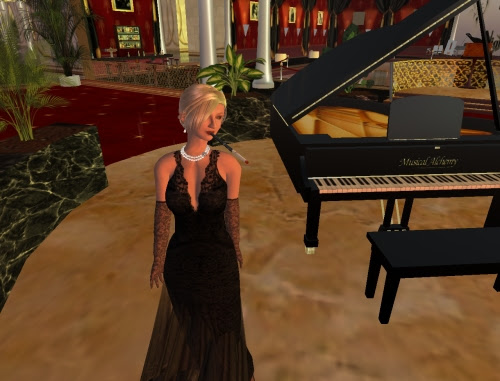 And this is Rivendell, believe it or not. More precisely, Rick's Cafe in Rivendell, resembling neither named movie location, but pretty nice looking, anyway. 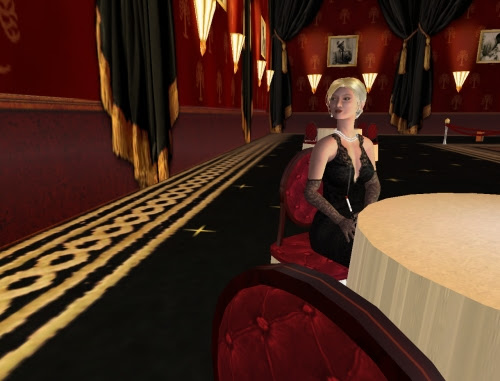 "What d'you mean he doesn't drink with customers? Well, why don't you tell him about the letters of transit I have for Rohan." 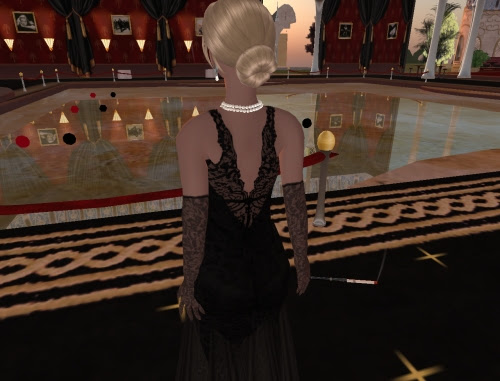 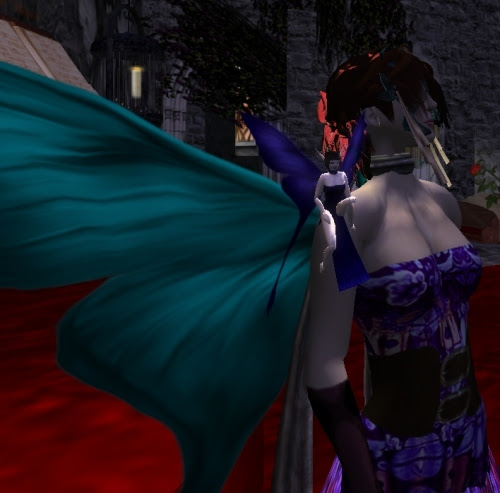 Here's Natalie, aka Vega, trying on a bunch of the freebies she collected in the Labyrinth from Labyrinth. She was quickly being "colonised", as she put it, by nice freebie fairies, so we decided to check out the shop of the person who made them. 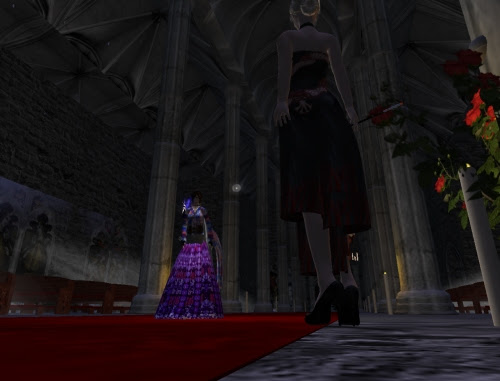 A fairly impressive place. I could have done with fewer 2D props. 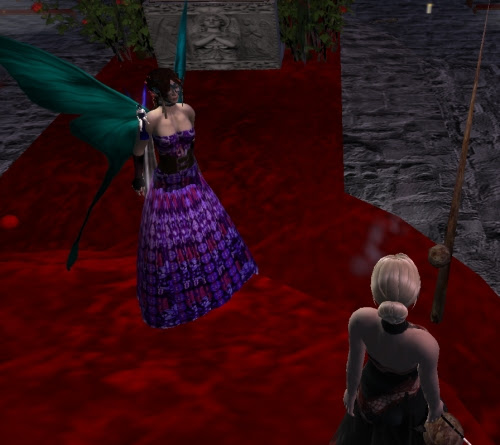 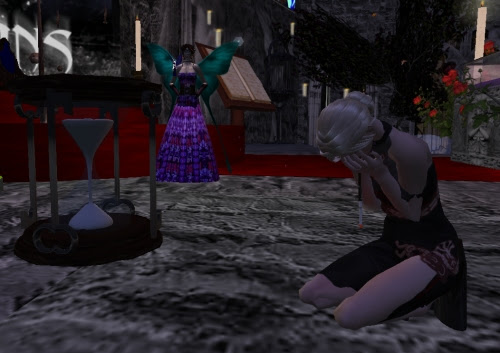 Time's up! Despair! Vega seems to feel Toubanua has no-one to blame but herself. 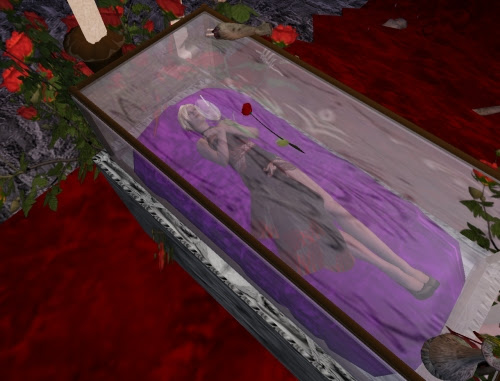 Tou died as she lived; smoking.

As I was writing this post, I heard cat snarling outside my window. I went outside to find the grey cat had chased the white cat, whose name is Snow, I've now learned, up a tree from whence my neighbour is now trying to coax him down. Apparently there are two grey cats, one of which also belongs to the neighbour, and the other is the bedraggled one. Amazing how the shape of a story can change from a single event. I still hope the bedraggled grey doesn't meet with misfortune.
Posted by Setsuled at 4:00 PM
Email ThisBlogThis!Share to TwitterShare to FacebookShare to Pinterest