Just Across the Atlantic Ocean 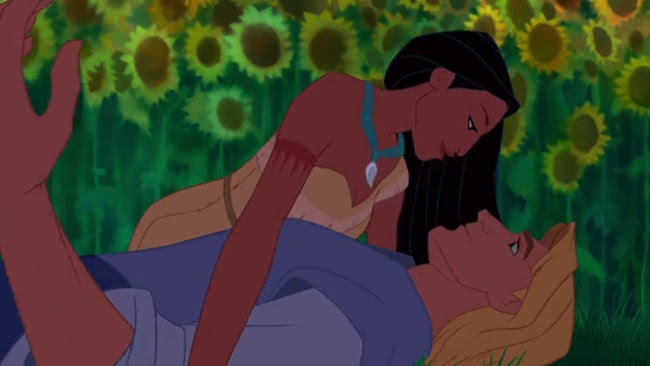 Happy Easter, everyone. I guess this is a good time to talk about 1995's Pocahontas. It seems like it's set in spring, anyway. It's a shame it's such a bad film because it has many excellent qualities, chief among them the design, which borrows heavily from Eyvind Earle's designs for Sleeping Beauty. Also admirable are Glen Keane's fantastically sensual animation for the title character and Alan Menken's terrific melodies. However, the preachy, self-flagellating premise of greedy Europeans versus noble savages strikes the wrong note regardless of whether the viewer is conservative or liberal. This moral preoccupation unfortunately dominates the heart of the film, hamstringing a promising romance between two very pretty leads.

You may have heard this movie is not historically accurate. That's an understatement. The inaccuracies are innumerable and they come in all sizes, from the purpose of the English colony to the mischaracterisation of the Powhatans as a society of sorcerers who could talk to trees and bears. But who cares? I love fantasy. I don't need The Little Mermaid to be historically accurate, or Aladdin, and certainly neither of them are. The trouble is, neither The Little Mermaid nor Aladdin were trying to make an argument about the relative virtues of two existing cultures. 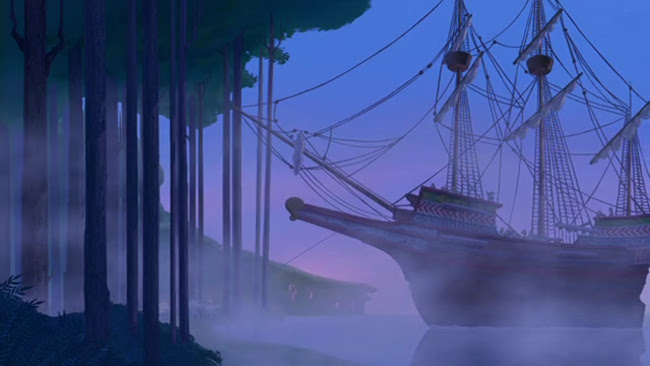 The last thing I want to do is get on my moral high horse about it, though. I'm sure everyone's had plenty of that. If it is what you're looking for, you may as well just watch Lindsay Ellis' video on the topic, if it doesn't bother you that Ellis was cancelled recently. Ironically, it was because a mob on Twitter decided to interpret some of her comments about the latest Disney animated film as problematic with regards to race. You live by the archly smug deconstruction of pop media, you die by the archly smug deconstruction of pop media. Assuming this cancellation actually takes--cancellation actually seemed to boost the popularity of Ellis' friend Contrapoints. To which I say, thank God. That is the reaction people generally ought to have to these adolescent social media smear campaigns--do the opposite of whatever these little Napoleons want you to do. Unless that was their plan all along!

Anyway, I like Lindsay Ellis when she isn't getting too lost in trendy "academic" theory. She seems to have gotten angrier and angrier, though. She seems to have done all of her most recent videos with tightly clenched teeth. She uploaded some very old videos in the wake of Contrapoints' cancellation--I suspect to show she had nothing to hide from the people who dug up old deleted Contrapoints videos--and I was less struck by how politically incorrect she used to be than how happy she used to be. These videos clearly used to be fun things she and her friends were excited to put together. Now she's waging a war with fans whose resentfulness has increased in proportion with her success. Which may be inevitable with Marxists. So much for good old human nature. 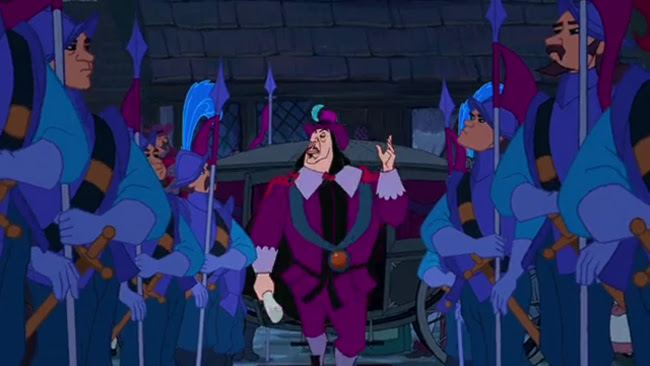 Ellis takes issue with the fact that the Powhatans are shown also being suspicious of the white people, even calling them savages. This is an implicit, and sometimes explicit, stance on the left now, that some races are incapable of hateful prejudice because they've been historically oppressed. Certainly European colonisers represented an enormous catastrophe for indigenous people, particularly in terms of introducing new diseases, and the extent of suffering and killing the American Indians were subjected to dwarfs any they inflicted on the Europeans, but inequity doesn't change fundamental human nature. Brutal kidnappings and grotesque executions perpetrated by the North American indigenous people show they were as capable of dehumanising their enemy as the next human. But that's really beside the point, or it should be, in a story about a fat courtier trying to dig for gold in loose soil warring against a people who have conversations with willow trees and clouds. 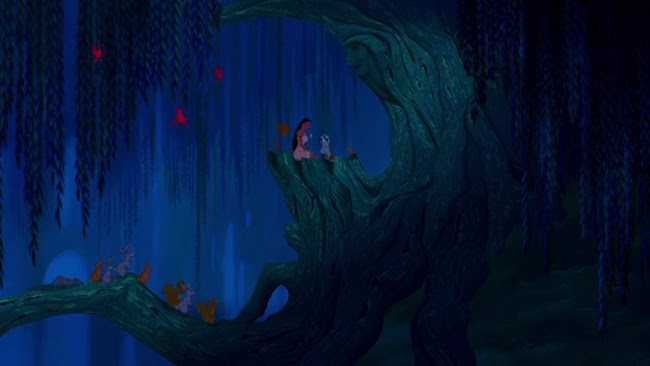 I mean, I do think it's odd Ariel never seems to think about the human propensity to eat seafood but, then again, where did she get that bikini? I don't think those clams killed themselves to cover her nipples. Or maybe she looted their corpses after they died of old age? But are we to believe she's a vegetarian? Is Pocahontas? She shows John Smith how it's possible to be perfectly good friends with bears instead of killing them. 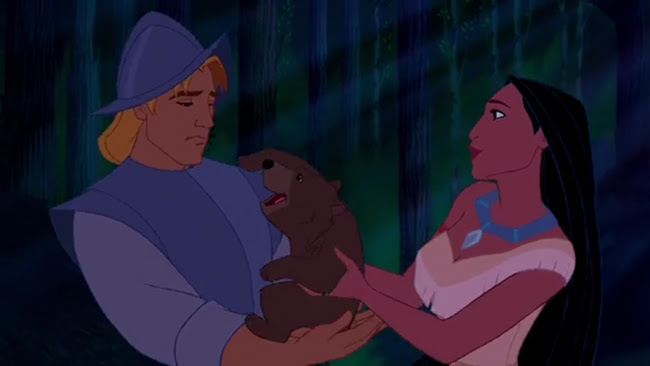 I wonder if Timothy Treadwell liked this movie.

You can handwave this stuff in The Little Mermaid, it's a little different when Pocahontas is presenting it as a central argument as to why Powhatan ways are superior to English ways. John says the only reason Pocahontas doesn't think English architecture is better than Powhatan is because she doesn't know any better. It's meant to sound arrogant and foolish. But let's face it, English houses at the time were better than Powhatan huts. So what else you got, Princess? 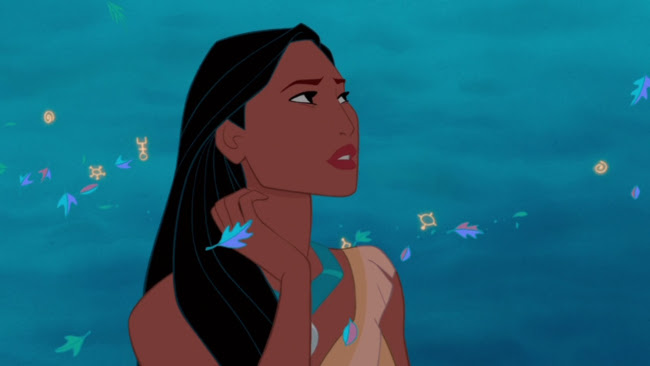 Well, eagles, owls, the "blue corn moon", etc. If this is all meant to be a metaphor for Powhatan reverence for nature, John Smith might have countered with some English pastoral poetry from the period. Maybe he could've told her about Romeo and Juliet, the play that formed part of the initial inspiration for the film's production. That's the real tragedy of the film's focus on dated political morality--the potential for a relationship between John Smith and Pocahontas is squandered. 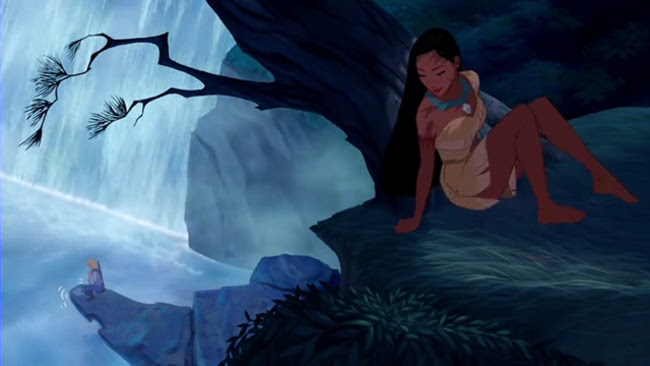 Their first scenes are terrific. Glen Keane was supervising animator on Pocahontas and he made a conscious effort to make her sexy. And, yowza, it shows. 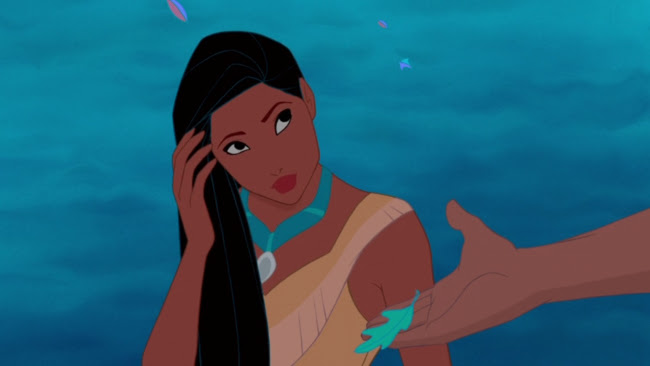 I love watching her stalk John Smith with her weird sideways crabwalk. She's the voyeur here yet the audience is mostly captivated by her. Which is part of the secret behind stories of voyeurs, as Vertigo shows so well--being a voyeur makes one a captivating subject. Voyeurs seem vulnerable because they risk being discovered and being caught in the act of spying also leaves them morally vulnerable. With Pocahontas we have a lot of other layers adding to a sense of her vulnerability--her bare feet in contrast to his boots, her innocence. Of course, we're not really exclusively in her point of view because we know more about John Smith than she does, such as the fact that he has a reputation for killing Indians. Few people would admit this adds spice to their chemistry, just as the physical threat posed by the Beast enhanced the chemistry between he and Belle. 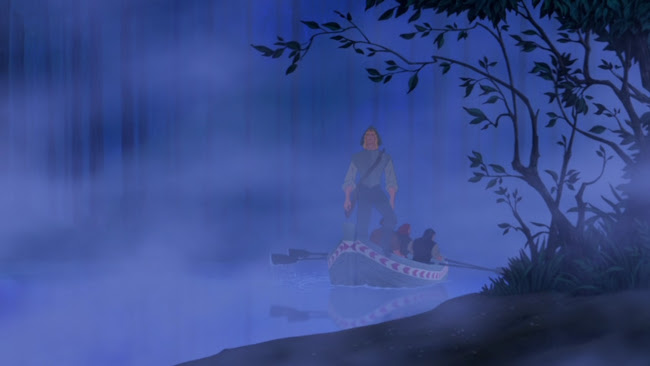 And John shows he's gentle with her raccoon. He plays with her furry animal. And then he almost catches her--she cowers behind her sexy legs and her beautiful hair becomes dishevelled. Good heavens, distress is imminent. 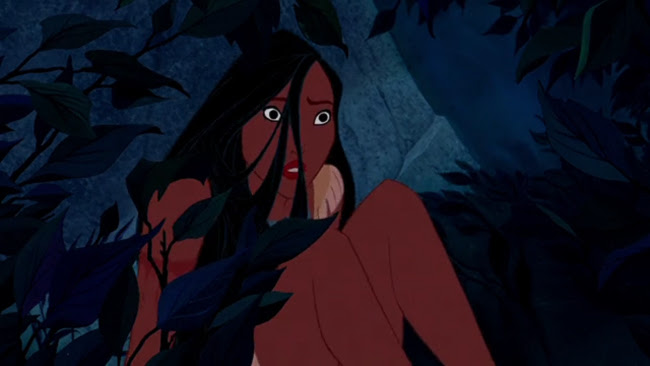 Would his strong hands handle her like the raccoon? Disney Princesses usually have their animal entourages and Pocahontas' looks a lot like Aurora's in Sleeping Beauty. For Cinderella, they were a model for a household she could rule. For Snow White, they were a symbol of her purity and innocence. For Aurora, they were outlets for confession and partners for play. For Ariel and Jasmine, they were simply sexless friends. In the case of Pocahontas, her two friends, a raccoon and a hummingbird, seem to represent something a little more complicated. 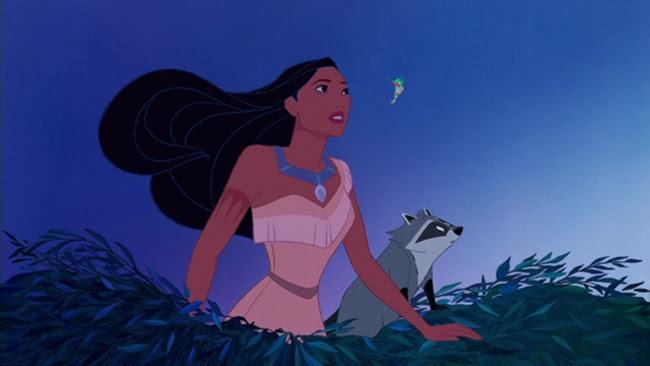 The hummingbird is more suspicious of John while the raccoon is eager to make friends with anything that gives him food. The raccoon is plump and soft, the sensual pleasure of eating makes him happy. The hummingbird is tiny and mostly a sharp beak. It's easy to see the two as manifestations of Pocahontas' psyche, the devil and angel on her shoulders. It's true, they could be seen as providing John Smith a chance to model his potential as a father for Pocahontas' child, but that doesn't seem to me what's going on. 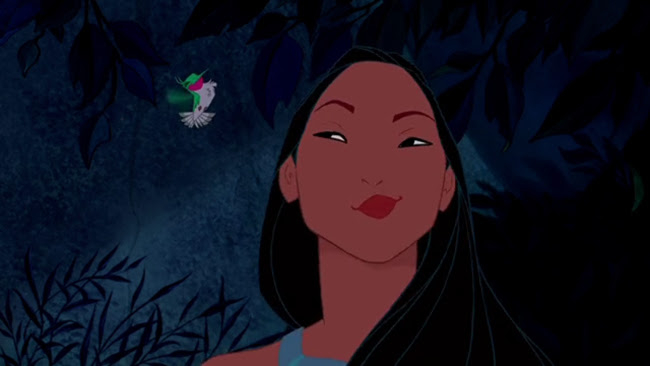 For a film with such divided reviews and a disappointing box office, Pocahontas has remained influential, most famously (or infamously) for its possible influence on James Cameron's Avatar (Cameron has denied it). But the best example may be Hayao Miyazaki's masterpiece Princess Mononoke, a film which, better than any critique I or anyone else could write, provides an eloquent counterargument to Disney's film.

Pocahontas is available on Disney+.

This is part of a series of posts I'm writing on the Disney animated canon.

Snow White and the Seven Dwarfs
Pinocchio
Fantasia
Dumbo
Bambi
Saludos Amigos
The Three Caballeros
Make Mine Music
Fun and Fancy Free
Melody Time
The Adventures of Ichabod and Mr. Toad
Cinderella
Alice in Wonderland
Peter Pan
Lady and the Tramp
Sleeping Beauty
101 Dalmatians
The Sword in the Stone
The Jungle Book
The Aristocats
Robin Hood
The Many Adventures of Winnie the Pooh
The Rescuers
The Fox and the Hound
The Black Cauldron
The Great Mouse Detective
Oliver & Company
The Little Mermaid
The Rescuers Down Under
Beauty and the Beast
Aladdin
The Lion King

Posted by Setsuled at 2:02 AM
Email ThisBlogThis!Share to TwitterShare to FacebookShare to Pinterest
Labels: animation, disney, fantasy, movies, pocahontas