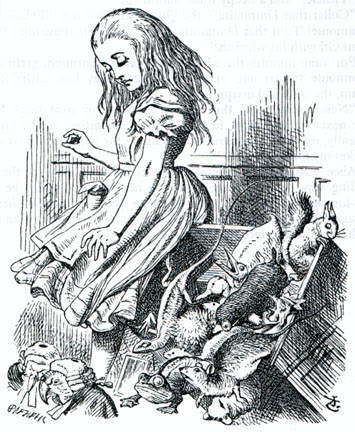 I'm forty-two years old to-day. That's the answer to the ultimate question of life the universe and everything, according to Douglas Adams. As much as I love his work, I prefer to think of the trial scene from Alice in Wonderland to-day, and the "Rule 42".

At this moment the King, who had been for some time busily writing in his note-book, cackled out “Silence!” and read out from his book, “Rule Forty-two. All persons more than a mile high to leave the court.”

Everybody looked at Alice.

“Well, I shan’t go, at any rate,” said Alice: “besides, that’s not a regular rule: you invented it just now.”

“It’s the oldest rule in the book,” said the King.

“Then it ought to be Number One,” said Alice.

The King turned pale, and shut his note-book hastily.

A friendly puppet cooked a felt souffle.
The kitchen grease could feed a tile gut.
We bought the bread to soak the whole cafe.
The dozen prawns had left the wat'ry rut.
The speckled sky reports on cookie sheets.
The crowded oven spilled lasagne sauce.
The healthy shapes adopt the forms of meats.
A question posed creates the query boss.
The face of stone became a shiny ham.
The triple suit approved a jolly sight.
The syrup stacked the cake before the jam.
A fluffy egg completes the pan delight.
Another pastry graced the gooey hill.
The talking stomach eats with happy will.