The Princess We Need 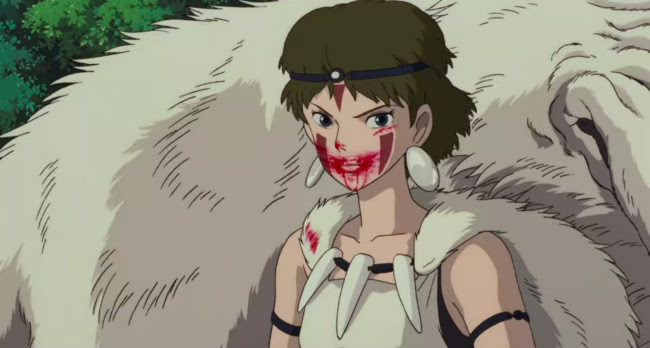 It still amazes me how great 1997's Princess Mononoke (もののけ姫) is. Especially watching it after not having watched a Hayao Miyazaki movie in a few years. Like most of this films, it's so densely packed with fascinating visual ideas it seems almost superhuman. And then you have the great characters and story on top of that. But it came to mind because I watched Pocahontas and I recalled again how Miyazaki's movie succeeded so strongly where Disney's failed. 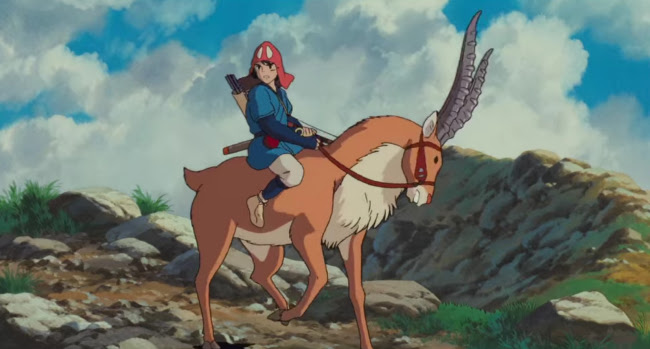 The hero, Ashitaka (Yoji Matsuda) rides a red elk, said by another character to be distinctive of the Emishi people. The Emishi were a real tribe in Japan that disappeared hundreds of years before the events of the film. The film makes no argument for the racial or cultural superiority of the Emishi, it's just interesting that he has this background, and it enables him to see the film's conflict with the clarity of an outsider. Ashitaka is such a solid hero he would have been boring in most films. In the context of the psychologically nuanced environment Miyazaki establishes, Ashitaka comes off as truly remarkable for the extent of his patience and keen instincts. 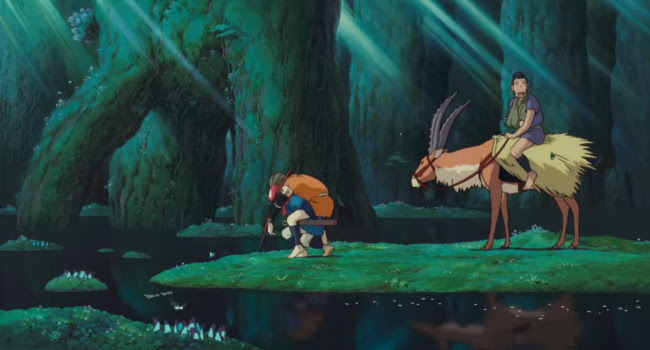 It's easy to say "life is complicated" but it's quite another thing to see it. The number of fascinating visual ideas in the film--the elk, the creepy/cute little forest children, the monk with the giant geta shoes, the inexhaustibly inventive animation of human and animal movement--is a visual complexity that complements the complexity of character. Many people have commented on the lack of "evil" characters. There is no Ratcliffe or other two dimensional maniac--which is not to say maniacs and tyrants don't exist but in order to have a serious discussion about the relationship between humanity and nature you can't define humanity merely by its abnormal extremes. Most destructive policies have reasons behind them and hindsight is by no means always 20/20, if it's honest. 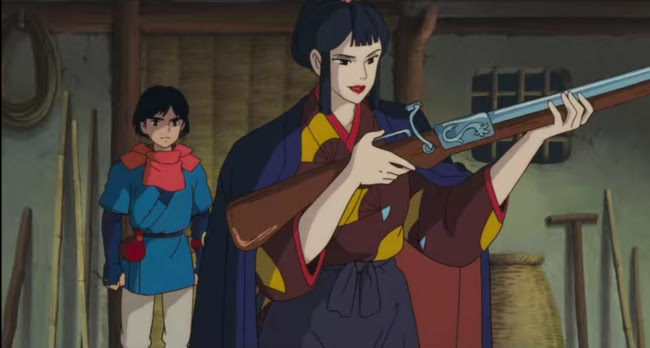 There are analysts who have bent over backward to ascribe evil to Lady Eboshi (Yuko Tanaka). But she has clear motives and the welfare of her community at heart. Ultimately, the film is less a story about the environment than it is a story about territoriality. Eboshi leads a community of lepers and prostitutes, San (Yuriko Ishida) is part of a community of forest gods. One could argue both groups would traditionally get the short end of the stick. The forest gods are of less and less use to a technologically advancing culture, lepers would be the definition of the sick members to be culled from a herd. And prostitution isn't an occupation associated with a long and healthy life. So both sides are compelled to fight extra hard for survival. But of course, their situation reveals not their peculiar natures in this regard but their essentially universal natures. What human or animal wouldn't naturally fight to survive if circumstances required it? 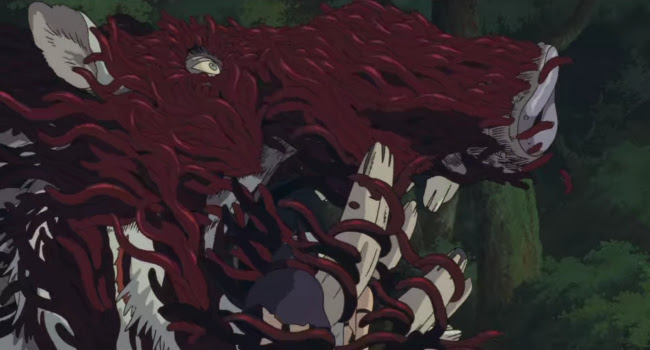 Above all, the movie isn't focused on preaching, it's focused on telling a good story. And I really admire its construction--how Miyazaki so quickly and thoroughly establishes Ashitaka's people with an action sequence. He establishes it so well that it's an emotional punch when Ashitaka's forced to leave it minutes into the film. And already we're invested in this protagonist enough that new pieces of information he discovers are more interesting to us because of how critically they may affect him. 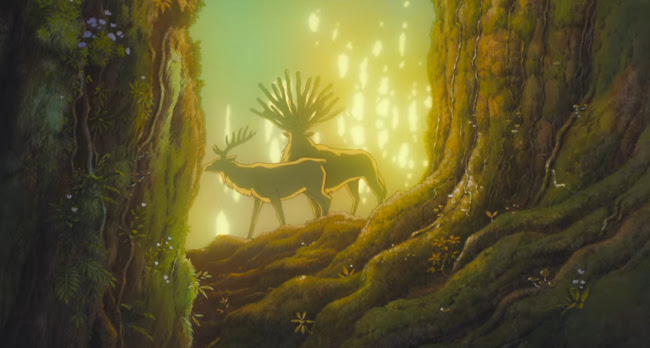 The consistency with which Ashitaka never takes a side in the conflict while behaving as a friend to both sides is lovely. The strength of character it takes for him to hold his course while San is cursing at him or the innocent people are hurt and confused by his unclear loyalties is beautiful because it always comes with a clear compassion for everyone.

Princess Mononoke has been very influential but mostly for its visuals. James Cameron did acknowledge the film's influence on Avatar and of course Dave Filoni has shamelessly pilfered from it for his Star Wars projects. It's a shame both men couldn't emulate Miyazaki's writing.

A hungry creature fights a feeding wight.
The gentle pool concealed a panicked fish.
The vibrant grass concealed the bugs from sight.
The ruddy claw revealed the tasty dish.
A sound dispersed the vision right and left.
The blades were grass disturbed beneath the foot.
The living shadow things were quick and deft.
The April air dissolves with rain and soot.
Descending grains reveal the phantom field.
The smokey house collapsed beyond the fence.
An iron ear discerned the wooden yield.
A crowd of trees regained a forest sense.
A verdant math produced a strange advance.
A word for rain implied a liquid dance.

Posted by Setsuled at 3:09 AM
Email ThisBlogThis!Share to TwitterShare to FacebookShare to Pinterest
Labels: anime, fantasy, movies, princess mononoke