Locals on the Move 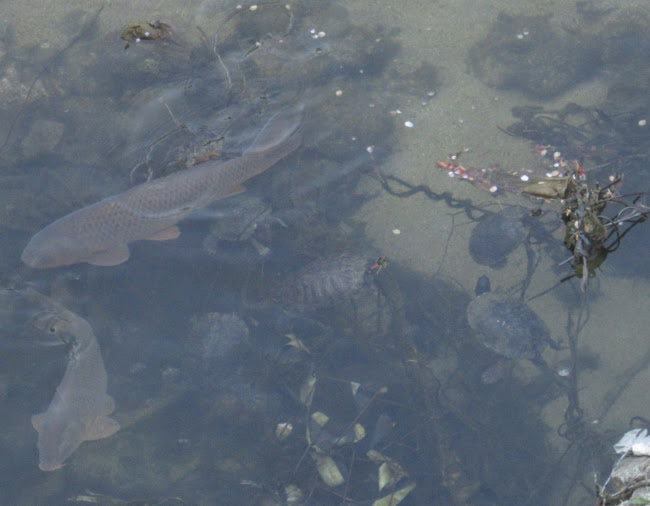 Turtles and fish were milling about in confusion yesterday. This was in the river near the school I just started working in. This is the fourth junior high school I've worked in so far. The school year begins in April in Japan so there are brand new first year students who still look like elementary school kids. Less than a month ago, I attended a graduation ceremony for outgoing third year students, fifteen years old and looking like young adults. I feel pretty lucky to have ended up teaching junior high in Japan and being able to watch so many kids in this period of transition.

I wish I could have said goodbye to more of the graduating students. Fortunately, I have run into some of them around town. I ran into a group of three girls at the mall, each one wearing her new school uniform--and each uniform was different. They're all going to different high schools. One of them is going to a school in Tenri, a good distance from Kashihara, so this may have been their last time hanging out.

I had to talk to them in Japanese because they either retained no English or they were just delighting in forcing me to speak Japanese. I sure hope it's the latter.

This morning at the crowded Kashiharajingumae station, one high school girl in a crowd moving in the opposite direction to mine called out my name and waved. I waved back though I didn't have time to recognise her.

The perfect tea appears with time and leaves.
The wayward page was turned by thumb and left.
The pants were weak beside the mighty greaves.
The worthy phones have supple shape and heft.
As wires clamp the nose, the questions form.
But any nose was named the same for streets.
For running cards who paint the yoghurt warm.
And bleach the priceless plot of ruby beets.
A heavy lid could never stop the tea.
A viper locks the case of captain cards.
Between the wasps there crouched a bolder bee.
The hardened honey broke in crystal shards.
Convenience grinds the lunch to plastic pulp.
A battle nears to find the biggest gulp.

Posted by Setsuled at 2:56 AM
Email ThisBlogThis!Share to TwitterShare to FacebookShare to Pinterest
Labels: japan, junior high school, students, teaching