One of to-day's random Wikipedia articles that loaded as my browser's home page--Battle Monsters, a Sega Saturn game whose entry I found amusing for the line, "The heavy use of digitized footage in the game is ripping off Mortal Kombat." There are Wikipedia entries written by twelve year olds from 1995, apparently. I see an older version of the entry had instead the line, "The heavy use of digitised footage in the game betrays its post-Mortal Kombat origins," which I guess wasn't plain or vaguely scandalous enough for the common folk.

After watching the last episode of Being Human's first series last night, I watched the fifth episode of Dance in the Vampire Bund with breakfast and the juxtaposition, along with the recent film Daybreakers, made it clear that the current effort to maintain vitality for vampire fiction in this post-post-post-Anne Rice world is to go into politics and vampires as a social class. Being Human seems to have pursued this line with somewhat weak focus, only sort of hinting at the vampire guild's intention to convert the whole world into vampires, and rather hastily moving about The Vampire Mitchell's loyalty. The episode focuses, appropriately enough on what being human means as Mitchell moves from feeling superior to humanity to seeing value in humanity and George learns to accept his lycanthropy as part of his humanity. Mitchell's story would have been almost totally arbitrary if it weren't for a nice scene of his former lover sacrificing herself so that he could live, though the scene is diminished somewhat by the baffling use of the Cait O'Riordan/Elvis Costello song "Baby Plays Around". Is Mitchell cheating on her by accepting her sacrifice? Is she cheating on him somehow, since the song's sung from a male perspective? It was really weird.

Dance in the Vampire Bund is partly about the vampire queen, Mina Tepes, creating a partitioned district for vampires in Japan--the titular "Bund", and I'm finding myself really intrigued by the use of vast vampire wealth to negotiate it, usable as leverage due to Japan's national debt. And you thought being in the hole with China was bad. I'm really enjoying the show's simultaneously creepy and charming vampire/werewolf lolicon romance, too . 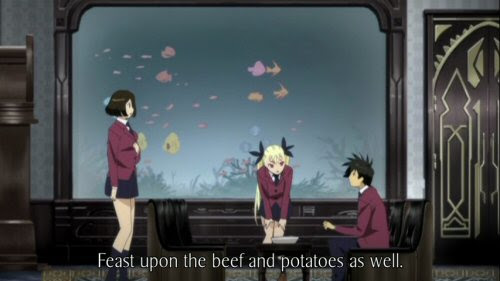 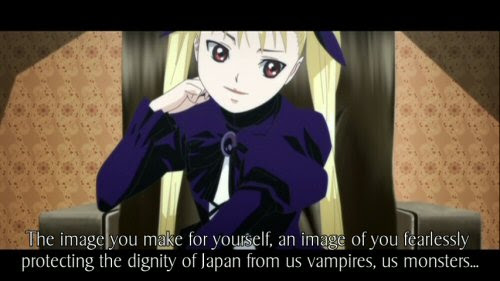 I finally got my car back to-day after just barely making it to the dealership by way of the trolley--I got there precisely on time. Now my car has a freshly painted hood and front bumper, an odd contrast to the eroded paint on the rest of the car. It looks like a patchwork animated corpse. This cost the other fellow's insurance 1300 dollars, which was apparently mostly for the paint. I'm guessing the dealership wasn't the best deal in town for paint.

Some robots will say they're androids online.
The bot war also had French resistance.
Love is when France and batteries combine.
Then comes electric human existence.
Posted by Setsuled at 6:51 PM
Email ThisBlogThis!Share to TwitterShare to FacebookShare to Pinterest