Ghosts in the Service Industry

I dreamt last night I was going somewhere with my family when we stopped outside a small restaurant with black windows. I was told I needed to go inside while everyone else waited in the car and stay in there as long as it took to get presents.

I found the place staffed entirely by people I somehow knew would much rather the place was an S&M dungeon. I started talking to a pretty waitress with short, copper hair, trying and failing to politely articulate my needs. Finally, she interrupted me and asked, "Would you like me to go to the supermarket and buy paper towels?"

"Uh, okay." I said. I waited in the restaurant for quite a while, maybe an hour. I glanced outside a couple times and saw my family hadn't gotten out of the car and didn't seem impatient.

The waitress returned with the paper towels, which she gave to me, but she seemed very angry with me. I thanked her and she replied, "You only asked me to do that because I'm the whisperer's daughter, didn't you?" I didn't find out if the whisperer was of the ghost or dog variety--I think I assumed it was an S&M term I wasn't familiar with.

I watched the fourth episode of Being Human's second series last night. So far I'm liking this series a lot more than the first, and not just because of the better looking women. The ghost stuff with Annie has been great and George's repressed werewolf manifesting as tourettes is perfect for Russell Tovey, who makes Gallagher look like a subtle and nuanced performer. The only downside so far has been the AA meetings for vampires Mitchell's been holding, which demonstrate why allegory is so lame--in an effort to make blood drinking as much like alcoholism as possible, contortions are made in the world's internal logic. It's never explained what causes all the vampires to go along with Mitchell, even avoiding drinking from people who want their blood sucked. I am kind of digging the Dr. Jarrat or whatever her name is subplot.

Incidentally, this is Pete Townshend at the superbowl versus me this evening; 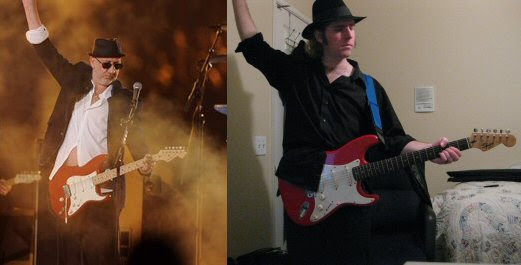 This still doesn't make me a paedophile.

Shuriken valentines are without waste.
Dog assassins will always howl too soon.
Ravaging chickens is to Dennys' taste.
So to diners, Hassan's ghost grants a boon.
The tomato juice is spiked with pepper.
A strange body failed to notice vodka.
One dame got in transformed from a leper.
Mata Hari written in by Kafka.
Negligent grooming affects a glamour.
Bodies are cons lazy and intrepid.
Funny agents have a runny humour.
The eggs were poisoned with citric acid.
Dour cooks are no match for yakuza.
So Denny's would bring odd ghosts to Gaza.
Posted by Setsuled at 8:47 PM
Email ThisBlogThis!Share to TwitterShare to FacebookShare to Pinterest