Meet the New Queen, Same as the Old Queen

Some robots will say they're androids online.
The bot war also had French resistance.
Love is when France and batteries combine.
Then comes electric human existence.
Liquorice loops excite appendices.
Animatronic gypsies need fibre.
A good AI fights every bear it sees.
But cows and flowers placate the tiger.
Aggressive energy transfers are blocked
By a carelessly aligned bounding box.
About the cameras a cat never talked.
And the computer's eye too gently talks.
Just self worth stories are satisfactory.
Wonderland's become a plastic factory.

Just got back from watching the Super Bowl at my family's house. I have to say I did kind of get emotionally involved in the game, maybe just from seeing Poppy Z. Brite's tweets over the past several days. Maybe it's just that New Orleans has a street called "bourbon", which I always thought was cool. The game was certainly better than the commercials, which reached an amazing new standard of message consistency, insuring that viewers would come away with a portrait of a world of men desiring simple pleasures despite the machinations of their frigid, self-absorbed wives. I heard the NFL blocked a gay dating service ad--so I guess the message is, "Women are awful and there's no alternative." The Who halftime show wasn't bad, though. I think Pete Townsend probably regretted wearing the jacket that constantly got in the way of his windmill.

Speaking of brilliant alleged paedophiles, I saw there was an ad for the new Alice in Wonderland movie. I'd actually been reading about it just last night and my expectations keep getting lower. As the Wikipedia entry says, Burton's version has Wonderland in fact being named Underland because it's underground and the reason Johnny Depp's hair is orange is due to mercury poisoning, which was common among hatters as mercury was used to cure felt used for the hats. So Burton's making sense of everything, isn't that nice? Weren't we all saying, "The Alice books are great but I wish there was a more reasonable backstory for everything."

What I keep hearing in my head is Jack Skellington, upon introducing Christmas to the denizens of Halloween Town, saying, "Well, I may as well give them what they want." This Alice movie is about 19 year old Alice asserting herself as an independent adult by way of a fantasy adventure war. This movie's going to be more Tolkien than Carroll, I think, particularly when I see clips of an armoured Alice blocking lightning bolts with a shield. Because we can't expect an audience to enjoy a story about a little girl interacting with a curious, and only sometimes threatening reality. That would require an artist to glide on wonder alone and, really, wonder is so trivial next to combat and the importance of proving you're important.

And, again, we're getting a movie that combines the Queen of Hearts from Alice's Adventures in Wonderland with the Red Queen from Through the Looking Glass. So does that make Anne Hathaway's character a white Queen of Hearts? Or Queen of Diamonds?

Still trying to keep an open mind. I like Burton and Anne Hathaway does look good in her makeup and costume. But so far the only thing I'm really looking forward to is The Cure's cover of "Very Good Advice" from the 1951 Disney film.

But I did enjoy playing American McGee's Alice last night, despite its lacklustre dialogue. The sound effects, Chris Vrenna's soundtrack, and the imagery create a nice atmosphere and the game has a decided Doom feel to it, so particularly by the time you meet the Mock Turtle, you get very caught up in trying to survive, which easily makes up for bad dialogue.

I still have Fridays and Saturdays marked as days off. Though being behind with this chapter of my comic meant I had to do a little drawing yesterday, I still had time to go to Tim's and play Oblivion before indulging in diversions here. I thought for about thirty minutes that I'd lost my camera yesterday before I finally found it in my purse and I took a bunch of pictures out of relief, only two of which turned out any good; 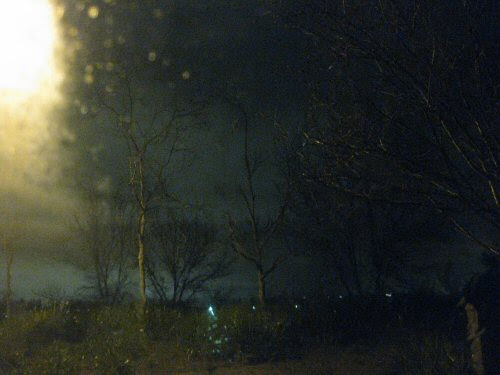 It's been raining again lately. I thought this view from my dashboard looked like a 1950s horror movie set. 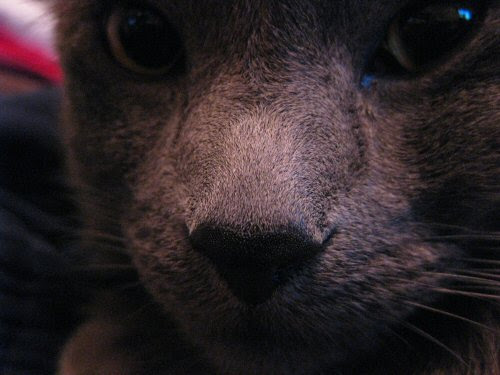 In unequivocally good Alice news, I found this site of great, high resolution versions of John Tenniel's illustrations, from which I've made some Through the Looking Glass lj icons, for anyone who wants them;

While I'm uploading icons, here are some Venia's Travels icons I made a couple weeks ago and forgot to upload;

Yes, I do love drawing Wircelia and Kakeshya making out.
Posted by Setsuled at 9:05 PM
Email ThisBlogThis!Share to TwitterShare to FacebookShare to Pinterest