I was given a little reminder yesterday of why I don't like children--in line at the grocery store, behind me was a sheriff, who was a little old lady, and in front of me was a little old lady and two four or five year old kids. This lady seemed to be on crack, constantly telling the kids to calm down, which they didn't, and telling everyone around her how she used to shop by herself.

As she was checking out, the kid who'd been jumping up and down in the cart knocked the cart over and began to cry loudly. So the sheriff gave him a badge sticker, which calmed him down long enough to run away from his caretaker and outside, at which point the sheriff threatened to take away the badge. It all seems like a metaphor for some larger social issue, doesn't it?

Does anyone know of a good programme for splitting mp3s? I finally got my hands on a collection of soundtracks to Akira Kurosawa movies, but a lot of them are entire soundtracks crammed into single mp3s. Incidentally, if you've seen Ikiru and you don't start to tear up when you hear its music, you're certifiably a psychopath.

My favourite video game, Oblivion, allows you to place your own mp3s in the game's soundtrack, with different playlists for towns, dungeons, the outdoors, and battles. I recently found a mod that created more specialised playlists with new directories for regions, specific locations, and times of day. So I've been going through a lot of soundtracks and instrumental albums to fill out these lists, a process over the course of which I discovered I really don't like Hans Zimmer. I like The Dark Knight soundtrack, which was composed by Zimmer with James Newton Howard. I guess it's Howard that really makes it work for me, because going through The Gladiator soundtrack and the Pirates of the Caribbean soundtracks, I find something oddly lifeless about Zimmer's work. There's something greyed out about it, no effective highs and lows. Though I was intrigued to notice a track on the Pirates of the Caribbean: At World's End is a pretty unabashed homage to Ennio Morricone's Once Upon a Time in the West score.

I keep thinking about what a missed opportunity the Pirates of the Caribbean movies were. Why did it have to turn into a big, cosmic monster truck rally for the fate of the world? Couldn't we have just had stories of, you know, piracy? Maybe it just needed a better score.

I'm still watching Being Human, and I was fascinated to see that, after an episode making fun of Morrissey, Joy Division, and Echo and the Bunnymen fans for being excessively gloomy, there's an episode where Mitchell the Vampire accidentally lends a kid a DVD of someone having sex which he'd somehow forgotten stashing in a Laurel and Hardy DVD case. Following this, our heroes are persecuted by the whole community and someone gets hit by a car. No wonder the show's writers don't like a song about a guy who doesn't care as much about his comatose girlfriend as he pretends to--where would that leave Being Human's writers? Though, to be fair, this was the only episode written by a guy named Brian Dooley and the previous episode was written by someone named Rachel Anthony. Neither of these writers have written another episode of the series, so neither of their episodes seems worth giving up on the series for.

Anyone else think Russell Tovey looks like David Tomlinson? 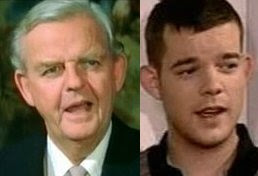 Posted by Setsuled at 9:34 PM
Email ThisBlogThis!Share to TwitterShare to FacebookShare to Pinterest