But Who Rescues the Rescuers? 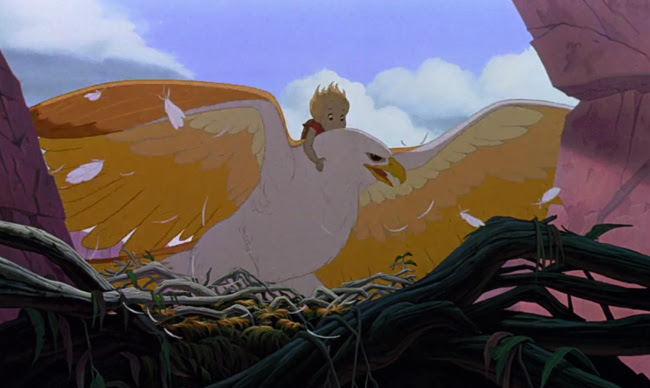 To save a little Australian boy with an unexplained American accent from an Australian kidnapper with an unexplained American accent, two tiny mice from New York are called upon in Disney's 1990 animated feature, The Rescuers Down Under Under. The first official sequel in Disney's animated canon (I guess The Three Caballeros doesn't count), it was a box office failure. With terrible writing and a return to the kind of premise that had failed for decades to bring success to the studio, one might well wonder why the film was greenlit after The Little Mermaid made a splash. It makes a little more sense when you consider 1977's The Rescuers had been the biggest box office success for the studio since The Aristocats. The Rescuers Down Under entered production long before The Little Mermaid was released and Disney saw which way the wind was blowing. So this film was a bit of a throwback but, at the same time, it was the first Disney animated film to be completely inked and coloured on computer. The difference shows, particularly in terms of shading, and I wouldn't call it an improvement. 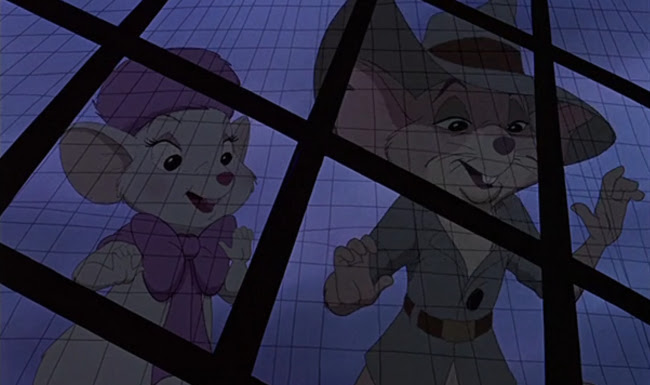 Although the colours in The Little Mermaid were limited by the cost of paint and so they didn't always properly reflect shifts in lighting, the hard edged shading in The Rescuers Down Under, gratuitously applied, doesn't create an additional sense of depth as much as it looks cluttered and plastic. 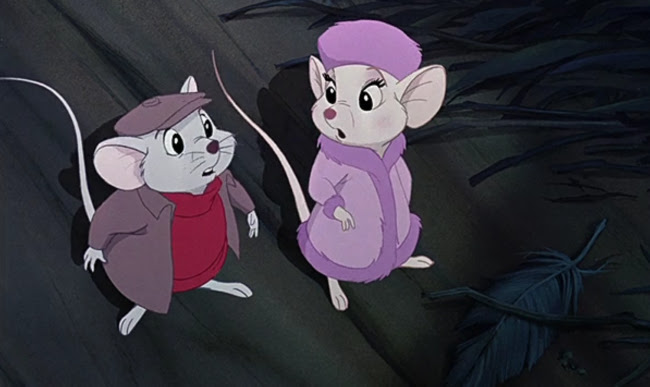 The main problem is the film's writing, though, which primarily concerns Bernard and Bianca. Bob Newhart and Eva Gabor both return and both are completely wasted on a sitcomish plot about Bernard repeatedly failing to propose marriage to Bianca. Which is not to say the writing in the first film was first rate but it had the virtue of being closer to the original books. In both cases, the tragedy is in how completely the character of Bianca is divested of the psychological depth she had in the source novel. Being a point of view character whose hopes and anxieties we share, she becomes in the Disney films little more than a cheerful, unflappable object of Bernard's concern. The first film played this for laughs successfully a couple times, as in their flight through New York, but the sequel renders her totally devoid of personality. 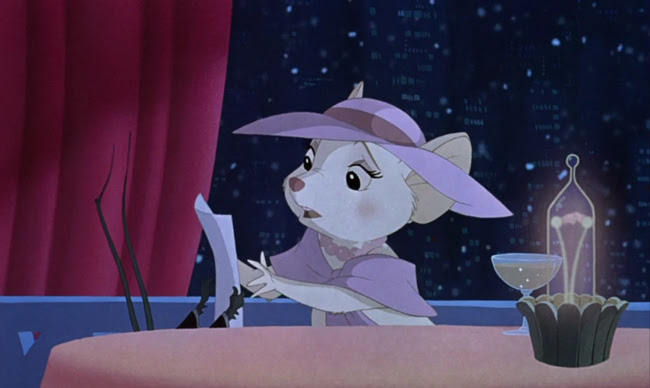 The villain is far more interesting. Though not approaching the grotesque heights of Madame Medusa, Percival C. McLeach, voiced by George C. Scott, is a captivating caricature of his voice actor. A vicious poacher, he benefits greatly from Scott's comedic instincts. Scott knew how to play this kind of exaggerated character, he knew the importance of saying absurd lines absolutely straight. 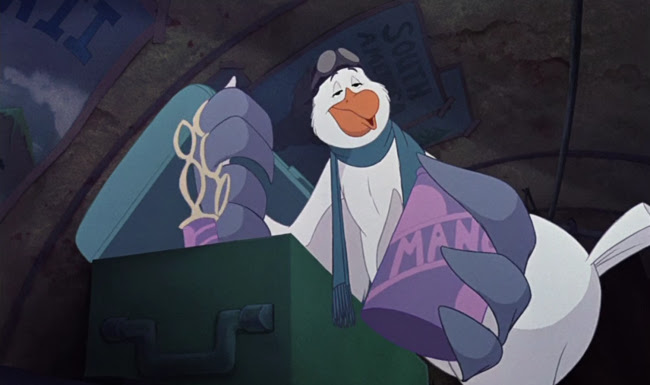 John Candy is a welcome addition, replacing the deceased Jim Jordan as an albatross, brother of Jordan's character. Candy's introductory scene has him playing nicely off a fretting Bob Newhart with the kind of tone deaf disregard for danger and propriety Candy excelled at. Sadly, he gets sidelined in a tedious side plot about his injured back. 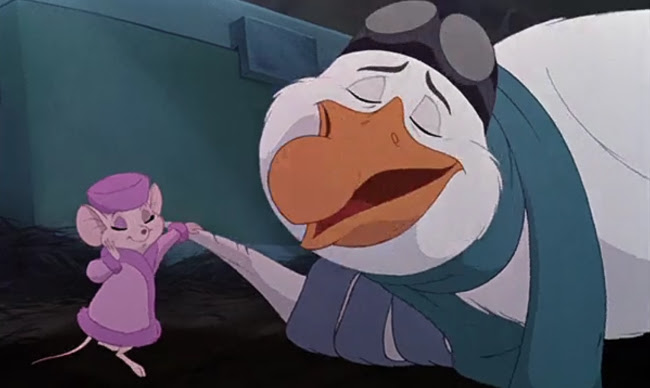 The best part of the film involves another bird, though--the astonishingly, and expensively, animated golden eagle whom the little boy rescues. 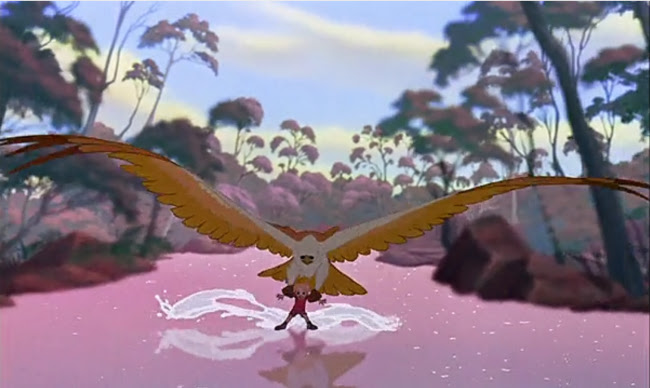 Watching the flight sequences in the beginning is breathtaking and inspire anticipation of something grand. Following this is a sequence of radio communication across the world as many mice relay news of the boy's distress from Australia to Hawaii to California and onwards to New York. The build up is great . . . and then it crashes with a scene of Bernard fumbling with his engagement ring. Wilbur the albatross couldn't have a worse landing. In a bit stolen from Indiana Jones and the Temple of Doom, the ring skitters across the restaurant and, just before Bernard can grab it, it's kicked by a passerby. The shot is framed exactly like Kate Capshaw chasing Lao Che's diamond. 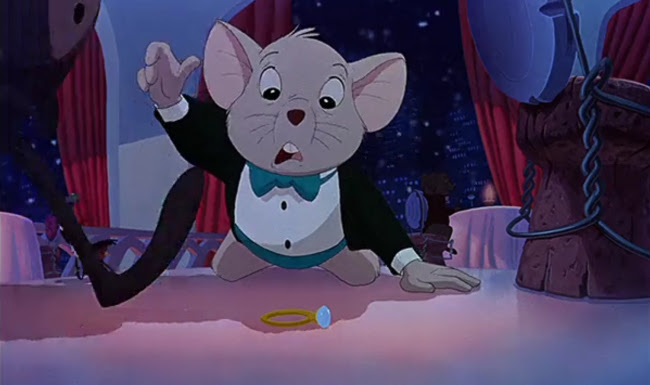 A few scenes later, the film lifts the door knocking gag from C3PO in Return of the Jedi, making me wonder if the film was going to plunder everything from George Lucas.

It doesn't, though, and there are a few funny moments, the standout being a routine between McLeach and his pet iguana as the animal stealthily tries to swipe eggs from the man's lunchbox. 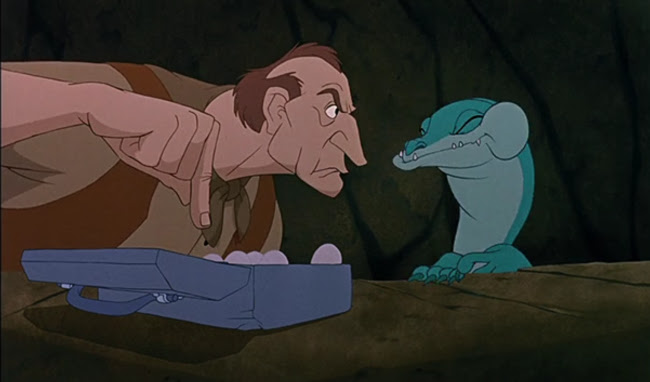 So The Rescuers Down Under isn't a complete waste of time. It has some good garnish around the edges. It's a shame about its saggy centre.

The Rescuers Down Under is available on Disney+.

Posted by Setsuled at 2:08 AM
Email ThisBlogThis!Share to TwitterShare to FacebookShare to Pinterest
Labels: animation, disney, movies, the rescuers down under