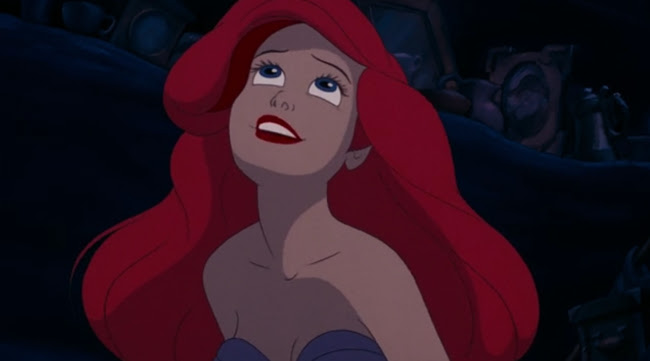 In the late 1980s, Disney discovered the virtues of sex, but that's not the only reason 1989's The Little Mermaid was such an enormous success and game changer. The first film of the "Disney Renaissance", the studio finally snapped out of its rut of almost exclusively producing chaste animated stories about talking animals (the disastrous Black Cauldron not withstanding) and instead gave us a beautiful movie about a sexy girl in a bikini trying like mad to get with a handsome boy. But many other elements came into play to make this film a masterpiece--the return to a sense of grandeur all but absent since Sleeping Beauty, use of Broadway style songs to move the story instead of being an occasional diversion, the psychological resonance of Hans Christian Anderson's premise, and the crucial revelation that exaggeration can be beautiful. 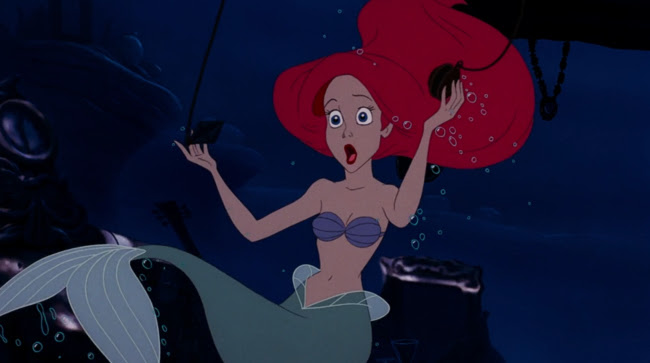 I remember listening to the commentary track on Sleeping Beauty and hearing about how the animators hated working on Price Philip and any character who had to closely resemble real life people. Animators preferred working on the more cartoonish supporting characters who, more often than not, were the real stars of the film--the fairies in Sleeping Beauty, the mice in Cinderella, or the dwarfs in Snow White. This was born of the belief that for someone to be beautiful they had to be more realistic. Of course, between Snow White and The Little Mermaid there are plenty of examples of sexy cartoons--from Ralph Bakshi's experimental films of the 70s to the emerging power of Japanese manga and anime as a globally influential phenomenon. Indeed, one can possibly detect the influence of anime in the dramatically larger eyes Ariel (Jodi Benson) has compared to earlier Disney princesses. 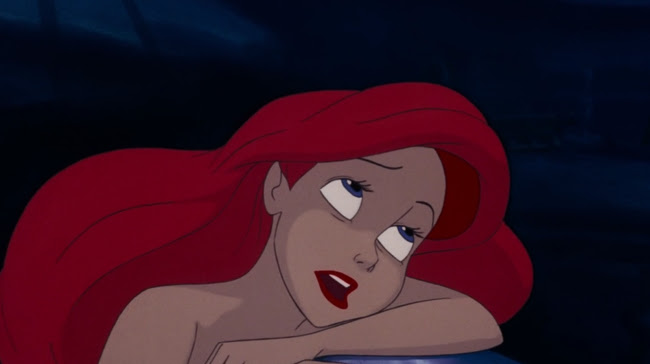 But Ariel is distinctly not like typical anime characters in the department of animation. Characters in anime tend not to move as much, a feature born of budget constraints that became a distinctive part of the artform. American animators tend to want as much movement as possible, even if it looks bad, whereas anime tends to work more like illustration, benefiting from its static nature, occasionally enhanced by movement deployed with surgical precision. The American way of doing things can lead to characters moving in strange, jerky gesticulations, like the human characters in The Black Cauldron. Ariel, though, is always captivating, her gestures evocative of true human expression heightened by ingenious aesthetic instincts. 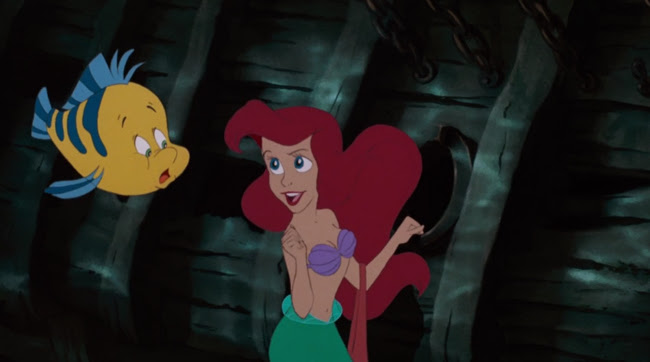 As with previous Disney films centring on human characters, live action actors were shot for reference footage and actress Sherri Stoner, who shot Ariel's reference footage, deserves some credit for Ariel's expressiveness. But the animator Glen Keane took Ariel far past any natural movement Stoner could be capable of. I wouldn't be the first to note similarities between Jessica Rabbit and Ariel--I don't think it's a coincidence they both have the same hair colour (Hans Christian Anderson said the little mermaid's hair was black) and I certainly think Jessica's popularity encouraged Disney to make Ariel more sexual. But rather than say Ariel is the offspring of Jessica, I would say they both have a common ancestor called Pauline. 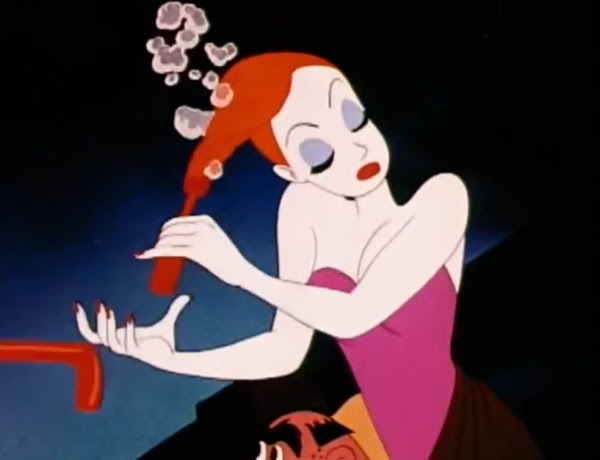 This was a character from a 1945 Donald Duck short called "Duck Pimples". Pauline was a parody of a femme fatale existing in a surreal dream world take-off of a crime film Donald finds himself in in this extraordinary short. Pauline may not have even been intended to be beautiful, her movements have more the quality of parody--she's a particularly gabby femme fatale. But she is beautiful, in part because of her exaggerated features and gestures. Also in Jessica and Ariel's DNA one might find traces of Slue Foot Sue, another redhead, from Disney's 1948 package film Melody Time. 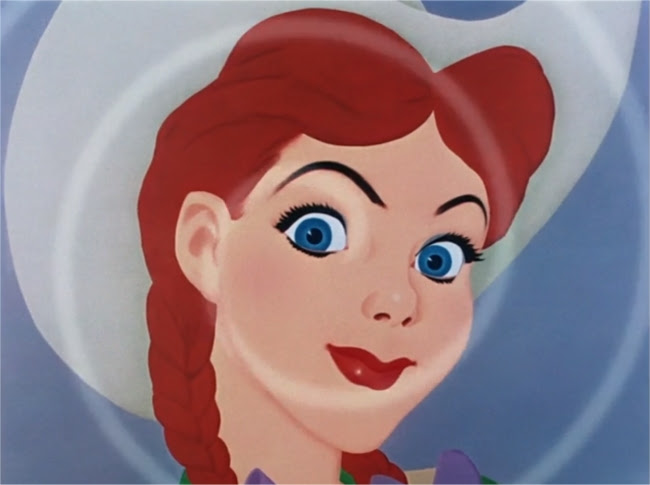 In both cases, the animators had been more focused on creating an exaggerated character than on creating a serious dramatic figure--Pauline and Slue Foot Sue are quite different from Cinderella, their official Disney princess contemporary. 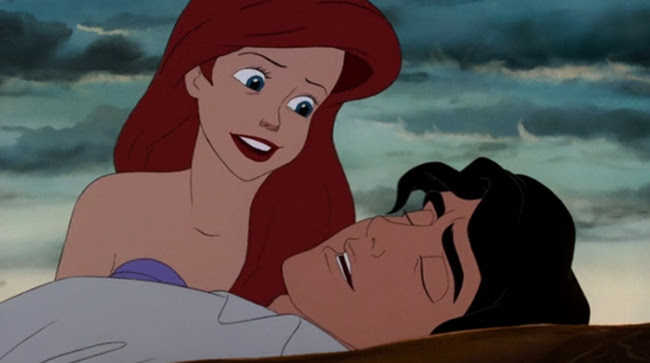 And like those characters, Ariel is sexy, and you can sense the pleasure the animators had in creating shots like this: 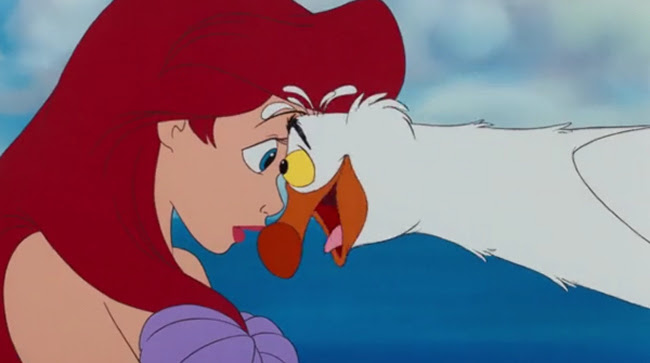 Her recoil from Scuttle (Buddy Hackett) is just a bit more extreme than natural. And, of course, there's the lovely sequence of her bottomless, staggering happily on the beach.

Unlike Pauline, Sue, and Jessica, though, Ariel is innocent. There's not a manipulative or petty bone in her body and a big part of the immense appeal of the "Part of Your World" sequence is the impression of complete, unvarnished, earnest desire. There are no layers of psychological trauma creating phantom compulsions. Maybe she doesn't really understand the human world but she wants it with a childlike sincerity. One could draw comparisons to Pinocchio--she's a child who goes out into the world on a quest to transform herself in the process. Hans Christian Anderson's story is even closer to Pinocchio because, rather than just becoming human and getting the guy, the little mermaid hopes to gain a soul in the process. The soul, in Christian understanding, could be translated into the sense of valid personhood Pinocchio seeks by becoming a real boy. Like Disney's Peter Pan, though, their Little Mermaid works out to be almost an anti-Pinocchio. "Part of Your World" sets up Ariel's innocent desires and misconceptions and then we see her take drastic, dangerous action to achieve her goals of entering the human world and kissing Prince Eric (Christopher Daniel Barnes). But unlike Pinocchio, Ariel never learns a lesson, never has an epiphany where she understands that her father was right to be cautious. This is despite Sebastian's (Stephen Wright) encounter with a psychotic chef--the film brings up several times the human tendency to kill and eat fish but always plays it off with as a laugh and Ariel never has to reckon with it. Partly for this reason, the film feels like it loses focus a bit once Ariel becomes human. Getting Eric to kiss her isn't quite a satisfying enough goal and doesn't seem like the natural answer to the yearning expressed in "Part of Your World". 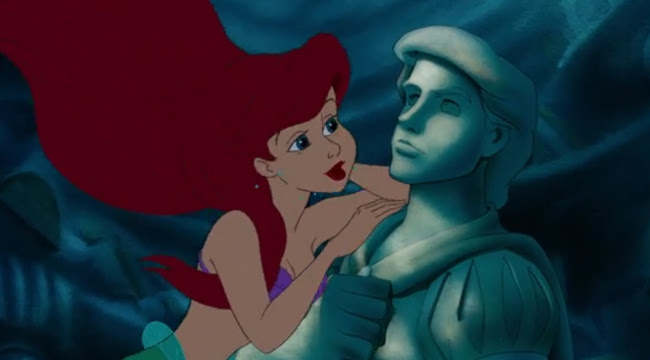 I wouldn't say we necessarily need a relationship between her and Eric and maybe a kiss could stand in as a theatrical shorthand but it doesn't quite measure up. Partly I think this is because Eric's animation isn't as interesting--Ariel's always more captivating so it's hard to sympathise with her attraction to him. "Part of Your World" taps into a recurring motif in fantasy fiction of the 70s and 80s--Ariel's yearning for the far off human world is quite a lot like Luke Skywalker gazing at the twin suns, dreaming of being far away from Tatooine. Star Wars followed up that moment with a world and a drama big enough to complement that feeling. Ariel has that great moment on the shore where she reprises a bit of "Part of Your World", noting "something's starting". It feels like the start of a grand adventure, not a bid for a boyfriend. 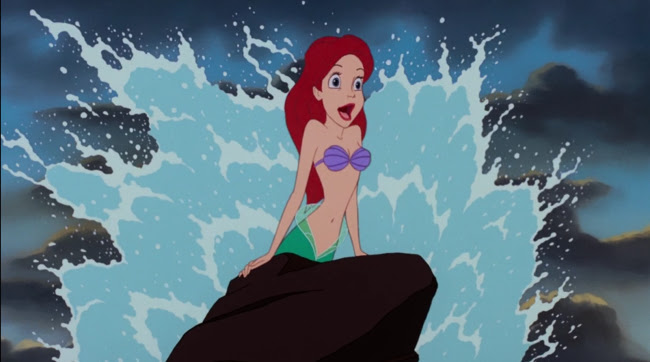 This might be because Disney wasn't able to translate something else in Hans Christian Anderson's story for a modern audience. In the story, the little mermaid finds a statue of the prince long before she meets the prince himself and she builds her dreams around that work of art. When she does save him from a shipwreck, her desire for him to know her as the one who saved him causes her to visit the sea witch and make the deal to get her legs. In the story, her legs cause her pain with every step--like "knives" stabbing into her and her feet even bleed. A feminist reading might perceive this as a girl who tortures herself for the approval of a man but I was reminded of stories of Ginger Rogers' feet bleeding after training with Fred Astaire or the tortures ballerinas endure for their art. Hans Christian Anderson describes Ariel's ability to dance as extraordinarily beautiful. Even though she does all this to capture the heart of the prince she hardly knows, we always have the impression that what she's doing is somehow noble. Even before his love ultimately goes to another and the mermaid refuses to sacrifice him for her own welfare, we understand instinctively that she's a good, selfless person. This is because Anderson is writing from an antiquated understanding of beauty as a virtue in itself. Although the Disney film has great beauty, it also has the modern lack of faith in beauty necessary to show a character sacrificing her comfort and ultimately her life for beauty and love. 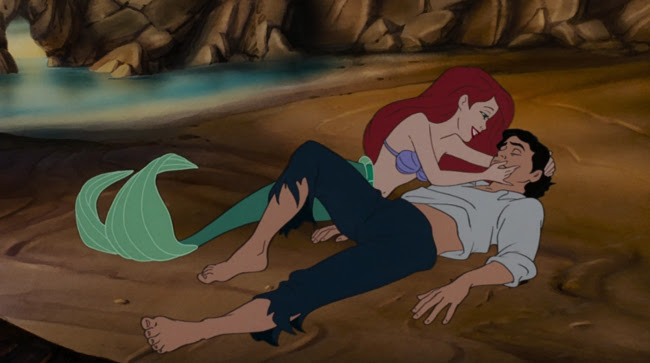 There are a lot of ways in which this is a transitional film. It's the last Disney animated film with xerography, traditional cell drawn animation. It has no real class themes--Ariel is royalty pursuing royalty--though Ursula (Pat Carroll) has something of Ratigan in her. One may note that both she and Ariel seek to transform themselves into someone more beautiful though Ursula is willing to sacrifice others. 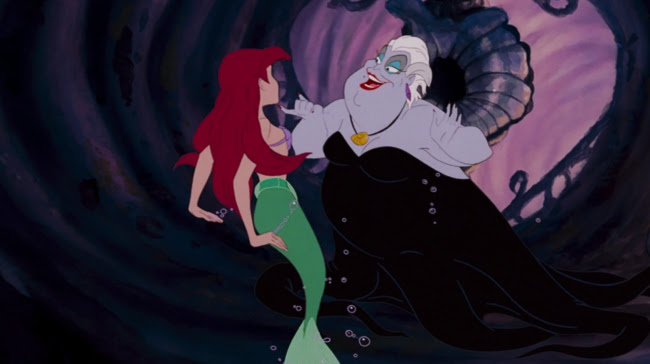 The animation, music, and design carry into a nice action set piece climax that almost takes the film into swashbuckler territory. All of the pieces work so well I can almost forgive the final act for not quite fulfilling the promise of the first.

The Little Mermaid is available on Disney+.

Posted by Setsuled at 12:11 AM
Email ThisBlogThis!Share to TwitterShare to FacebookShare to Pinterest
Labels: disney, fantasy, hans christian anderson, movies, the little mermaid