First of all, as a follow up to yesterday's entry, Caitlin now has a donation button set up. So, Sumner Redstone, as I've always suspected you've been a fan of this blog, I suggest you donate a billion dollars.

Seriously, though, to anyone reading. Help the lady out.

I managed to download another Mikio Naruse movie that's unavailable on DVD in the U.S., Meshi. Made in 1951, it's the first Naruse movie I've seen that has a genuinely happy ending. It's an ending that supports a woman's traditionally subservient role in the household, and yet, Michiyo, the protagonist played by Setsuko Hara, is a remarkably well drawn character, easily the most complex and interesting character in the movie.

Hara's performance employs a lot of subtlety. When Michiyo leaves for Tokyo without her husband, and stays away without explanation for months, we can see all the reasons in her face and gestures. We can see why she tears up, unsent, the only letter she writes to him. Not because she doesn't mean what she wrote, but because she doesn't know any more what she wants.

The more I think about the bulk of the movie, the less happy the ending seems, actually. And the movie seems more in line with Naruse's creative obsession with Mono no aware.

It's a good movie. A lot gentler than the other Naruse movies I've seen so far. It also features a tiny, adorable, tailless cat named Yuri; 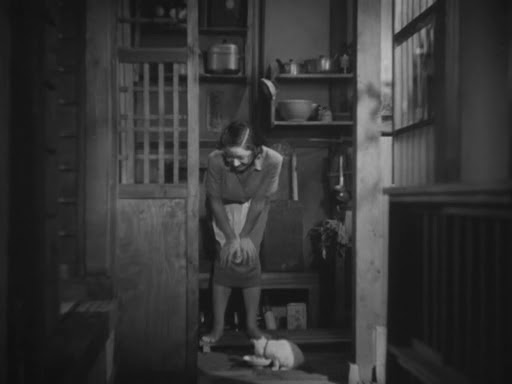 Yesterday I started reading Sir Gawain and the Green Knight for class. I also watched Vertigo on TCM. Yes, despite having it on DVD and despite having watched it twelve billion times in recent weeks. I noticed there were some subtle differences in the TCM print compared to my DVD.

Afterwards, I went wandering . . .
Posted by Setsuled at 2:47 PM
Email ThisBlogThis!Share to TwitterShare to FacebookShare to Pinterest