If there's one thing I've learned from playing Knights of the Old Republic lately, it's that said knights had absolutely no idea how to dress themselves; 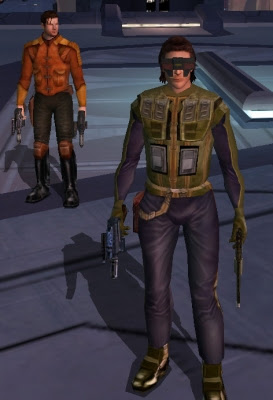 I can't even find screenshots of the godsawful "light battle armour" my character's wearing now. With stripey red sleeves and a pale grey vest, it's like a giant seagull crapped on Ronald McDonald.

I don't know what the problem is. You didn't get shit like this in the movies. The original trilogy was a lot of blacks and whites, and solid colours; it was strange, but plain, and it worked. And say what you will about the prequels, at least no-one's clothes made you cry tears of blood.

Incredibly, there aren't really any decent armour mods for this game. But it is pretty fun, I'll give it that.
Posted by Setsuled at 5:05 PM
Email ThisBlogThis!Share to TwitterShare to FacebookShare to Pinterest