To-day I dreamt (I really need to get out of the habit of saying "last night I dreamt") I was in Twin Peaks at the Road House where everyone was gathered to talk to Ed Hurley, who'd been lost in the woods for a while. He had wavier and slightly fuller hair, but no beard, just Everett McGill's bare, square face with its tiny eyes, looking both alien and solidly American.

I don't remember what he told everyone, but it was kind of disturbing, except to Agent Rosenfield, who found it an annoying, but mildly amusing, diversion.

Maybe a Twin Peaks dream makes sense, since I watched an episode of Deep Space Nine before bed that featured Richard Beymer. Also featured, very much to my surprise, was Frank Langella; 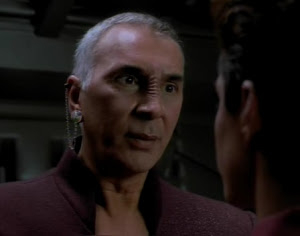 But I thought I was losing my mind because the dude is uncredited. According to his Memory Alpha profile, "Langella took the role because his children were great fans of the series. He was uncredited in all of his appearances as he did not want to seem to be doing it for the exposure or money." Which seems like an odd logic. Surely his presence would be more of a boon for Deep Space Nine than for him. And if it did help his career, what's the harm?

Anyway, it was the season premiere of the second season--my favourite season of the entire series--and Langella played a Bajoran minister, Jaro Essa, secretly involved in one of several Bajoran insurrectionist factions that emerged after the end of the Cardassian occupation and the introduction of the Federation's presence. I remember being fascinated by the plot thread when I saw it in--I guess it was 1994. But now, of course, it all seems familiar in new ways, and I can't help thinking that, as the aggressive occupiers who imprisoned and tortured the indigenous people, casually flinging the word "terrorist" at every inconvenience, the Americans are the Cardassians in this scenario.

I think I have a hangover right now. But I'm honestly not sure if what I'm feeling is due to all the rum I drank or all the Atomic Fireballs I ate. It was probably not the best combo, at any rate.

Here's an interesting video for "Greensleeves" I came across. The singer is Otake Yuki, whom I'd not heard of before. I swear I wasn't just searching for things that include the word "green". Honestly, I'd be surprised if I went a day without a confrontation with that colour.