I felt something like a hypocrite last night, having criticised the Fruit Stripe Gum wardrobe in Knights of the Old Republic, only to find myself once again admiring Duckie's clothes in Pretty in Pink; 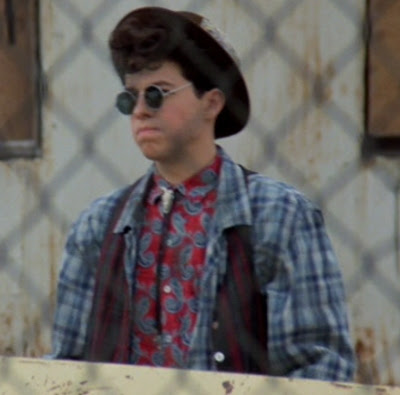 That movie's really growing on me. Most of the smarmy bits don't bother me as much.

It's weird how obviously the movie's geared towards the ending that was cut, where Duckie and Andie end up together. I still think it was pretty silly of Molly Ringwald to insist on the change--not to mention unprofessional--but I do think it would have been unrealistic for Andie to suddenly fall for Duckie. In my dream ending, Andie and Blane would have ended up hating each other and Duckie would have died miserable and alone. Once again, the world is lucky I'm not in charge of these things.

On the other hand, I'm pretty sure that's exactly how things would have unfolded in a realistic sequel. I think we would have learned the blonde making eyes at Duckie was just in his imagination.

I also read some of The Miller's Tale in The Canterbury Tales last night. Swich a ful wel likerous wench, the carpenter's wif is.
Posted by Setsuled at 7:01 PM
Email ThisBlogThis!Share to TwitterShare to FacebookShare to Pinterest