Working on a map yesterday, I listened to Donald Richie's commentary for Akira Kurosawa's Drunken Angel. I was surprised to learn that Richie was actually on set during the filming of a number of Drunken Angel's scenes--at one point, he remarks on how, if the camera had panned slightly to the left, he'd have been visible standing next to Toshiro Mifune. That was in 1947, when Richie had come to Japan as part of the force of occupiers.

What makes the commentary even better is that Richie is actually an extremely articulate and insightful fellow. He discusses the existentialism apparent in Drunken Angel, the story of a yakuza (Mifune), whose identity is slowly broken down after he contracts tuberculosis, a disease rampant in the filthy conditions of many of Japan's post-war cities. Mifune's the city's suave boss at the beginning of the movie, but he slowly loses power as he becomes physically weaker, unable to wean himself from alcohol and the debaucheries that are part of his lifestyle. The things he identifies as himself begin to destroy him in a process Richie continually refers to as "denuding" until he's left with nothing more than naked will.

Richie says he actually asked Kurosawa about the existentialism present in the movie, and Kurosawa had told him he had no idea what he was talking about. I found that surprising, though I probably shouldn't have, since, as a film noir made in 1947, Drunken Angel was part of an era where filmmakers were making noirs without even knowing it.

Takashi Shimura's in the movie, too, as an alcoholic doctor trying to help Mifune's character; 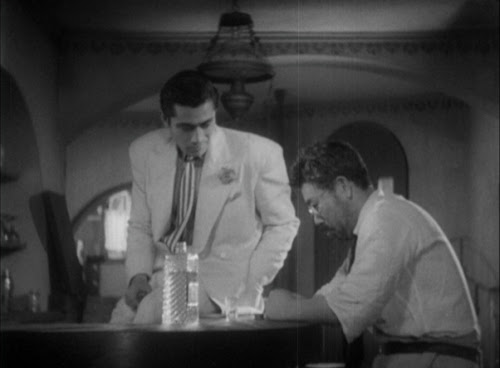 And that's about all I did yesterday. I suspect I shall be making more maps to-day. I have a huge backlog of commentaries to listen to, fortunately . . .
Posted by Setsuled at 3:28 PM
Email ThisBlogThis!Share to TwitterShare to FacebookShare to Pinterest