To-day I dreamt Katy Perry wrote a song called "I Kissed My Dad and I Liked It".

I was going to try getting up at noon to-day, but doing so would've meant shaving an hour off my sleeping period. I didn't want to feel as miserable to-day as I did yesterday--wandering around downtown, I never quite felt there.

Here's another picture that didn't quite come out; 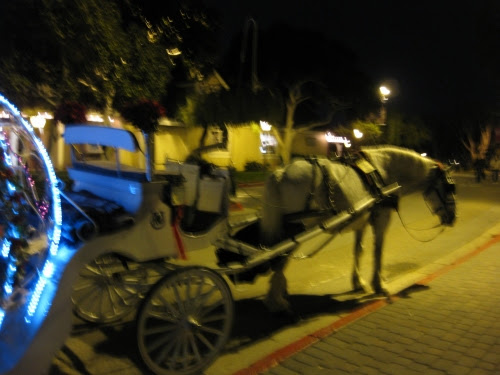 I took three pictures of that horse, hoping one would come out because he kept looking right at me.

The driver was taking a break when I walked up so I asked his permission to take the pictures. I thanked him, took the three useless, blurred images, and started to walk away when he said peevishly, "You're welcome!"

"Er, thank you," I said again. This was at Seaport Village, a pretty little tourist area by the bay. All the people working there I talked to sounded really pissed off, probably from dealing with tourists all day. First was a guy alone in a shop (actually the sign said it was a "shoppe") of Scandinavian knickknacks called "The Little Viking". I looked at a bunch of little statues of trolls and knights while he stood watching me with his arms folded across his chest listening to Howard Stern complaining about the FCC, apparently from The History of Howard Stern.

Next I stopped for lunch at a Greek restaurant where the Greek Man grudgingly allowed me to order a spanikopita.

I watched the fourth episode of Revolutionary Girl Utena to-day. Every time Utena fights a duel with someone over the engagement of Himemiya, the Rose Bride, it goes into this musical sequence, which is slightly different each time, called "Absolute Destiny Apocalypse";

I'm getting the impression that Utena's a revolutionary girl because she despises this ritual so much, which denies Himemiya the right to chose just about anything for herself. Though Himemiya doesn't seem terribly unhappy with the system herself--it seems as though Utena keeps fighting in order to prevent Himemiya from being hurt by her own complicity. It's really making me root for Utena. A long time ago, a girl I liked but who was also liked by another guy intimated that she wanted the two of us to fight over her, and I've always been turned off by this abdication of free will. I wonder how many of the conflicts in this world are due to people afraid of taking initiative for themselves.
Posted by Setsuled at 4:17 PM
Email ThisBlogThis!Share to TwitterShare to FacebookShare to Pinterest