"We'll Get This and then We'll Buy You Those Clothes"

At Nordstrom, every year is the year of pink and beige. I still can't believe people shop there.

I wandered around Fashion Valley mall to-day. The place makes me feel like it's an incredible time to be alive for young, pretty women who can spend thousands of dollars a week on clothes. The bookstore's finally been cast out, and the empire of shirts, pants, and skirts continues to expand, sometimes into strange, new permutations. It's weird how natural the Apple store looks among them. There was also a Sony store trying to be an Apple store. Small racks bearing black and grey electronics wreathed a curvy dais upon which grew nine bamboo shoots like a menorah. I guess they're trying to go for a slightly more traditional, human look than the great, glowing milk sack that is the Apple store.

I used to draw and write a lot in the Fashion Valley parking garage. These days I need far more controlled conditions. But I did work a bit on the Chapter 17 script in there to-day. The nice thing about mall parking garages is that you can truly feel alone there. Well, except for the kids skateboarding. They didn't bother me though.

Yes, I'm only just now writing the Chapter 17 script. But I'm not any further behind than I was with Chapter 16. All my efforts to get back to being exactly two weeks ahead instead of only a week and a half ahead since relatives visited late last year have been pretty much to naught. Basically because, since Chapter 11, I've been pouring a lot more energy into the comic. I just haven't had enough pages that I wanted to go quickly on. I remember Chapter 5, on which I did two pages a day to get ahead for Comic-Con, was much, much simpler than the chapters I'm doing now. I need a few more chapters like that.

I don't want to rush 17, though, because I want to do a lot of research before I get started on Chapter 18.

Anyway, remember to check out Chapter 16 to-day. It officially confirms I'm a Vertigo geek. I actually took this screenshot for reference; 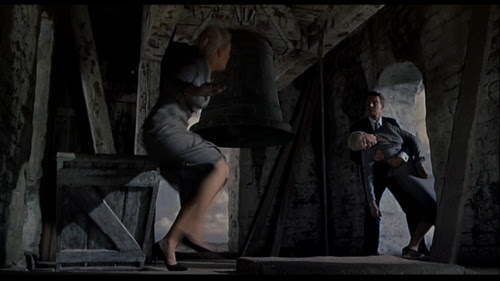 Not only that, I actually pulled colours from it. If they had Vertigo conventions, I'd go. Does that make me a Vertigie? A Vertiger?
Posted by Setsuled at 7:46 PM
Email ThisBlogThis!Share to TwitterShare to FacebookShare to Pinterest