Why does Ralph's have better hummus than everyone else? I love the kind with the bits of garnish in the middle--especially the Greek olive type, with sliced olives in the middle. No-one but the elite markets like Henry's and Trader Joes seem to have decent soup, though. I had some of Amy's brand minestrone last night--the nutrition facts label says that one of the supposedly two servings in the little 14 ounce can contains 24% of the daily recommended amount of sodium. Since I'm not a chipmunk, a single serving for me was all fourteen ounces, which means I had in that one meal roughly half the amount of sodium one is supposed to have in an entire day. And, let me tell you, after consciously cutting back on sodium lately, I could taste it. It was like a bowl of salt water. I may as well go the beach with an empty can, scoop up some surf, and sell it as soup du jour.

Barely any sleep to-day. But I got in plenty of sleepless ceiling gazing. I don't get it. Doesn't my body want to make the best use of it's time it can? To which my body would likely reply, "Well, you're the one locking us indoors drawing comics all night."

This afternoon, I watched the first episode of Revolutionary Girl Utena, a series I've been wanting to see for a long time. I was intrigued by the idea of a series about lesbians that wasn't aimed at a male audience, and I had a general sense that the series is considered to be more intelligently written than most anime.

So far, it's entertaining. The backgrounds and world details are pretty simplistic, and the social roles occupied by the characters seem to exist entirely to address interesting sexual and gender issues. Utena, the lead, has chosen to wear a boy's school uniform and is generally treated like a boy among her classmates, yet she seems firmly to consider herself a girl. Her apparent love interest is a girl named Anthy who seems to become the thrall of whoever wins a particular ceremonial sword duel, in which Utena engages wielding the hilt of a shinai, a wooden practice sword for kendo, versus a man wielding a steel sabre. The winner of the duel being the one who cuts a rose from the lapel of his or her opponent.

The simple backgrounds of the world Utena's at odds with feature many tall white towers, long planters, and a variety of other phalluses. I can tell this is going to be an interesting series. 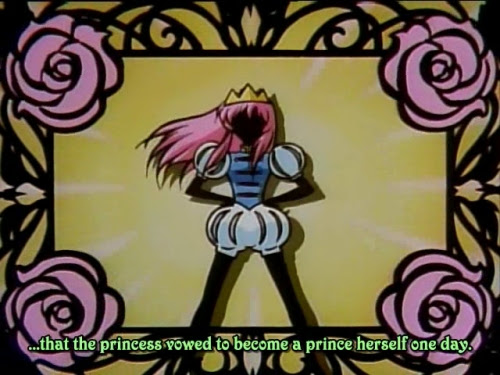 Posted by Setsuled at 7:38 PM
Email ThisBlogThis!Share to TwitterShare to FacebookShare to Pinterest