I'm not sure what my problem was yesterday, but it's kind of carried to to-day--a strange light-headedness. Trouble concentrating, bit of dizziness. My arms felt numb last night, too--I had a lot of trouble getting to sleep. I thought maybe there was a problem with my blood flow so I stood on my head for a little while. It seemed to help.

I was thinking of watching Mikio Naruse's Bangiku last night, but I ran out of time. I ended up, about an hour and a half before I'd intended to start getting ready for bed, not quite knowing what I wanted to do. I poured myself some Wild Turkey and started watching a video of a stage production of Wagner's Das Rheingold I'd had on the hard drive for a long time--it was two gigs, taking up a lot of space, but I just hadn't found the right moment to watch it. Last night I started it, but discovered I couldn't get the subtitles file to work. I was going to shut it off, but I started feeling really mellow--I don't know if it was the odd, light-headedness, the bourbon, or both, but I just felt kind of groovy watching these people clomping around the stage and singing in German.

On Friday night, I watched Ingmar Bergman's Through a Glass Darkly, which featured the best wallpaper I'd ever seen in a movie; 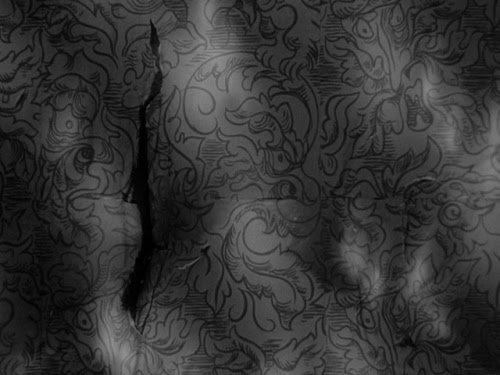 Karin, a schizophrenic woman, secretly visits a room in a beach house she's staying in with her husband, father, and half-brother--she hears faint voices from the other side of the wall, people she thinks are waiting for God, but she's not sure the people are real, much like we're not sure we can see demoniac faces in the wallpaper.

Through a Glass Darkly completely captivated me, it held me hostage, I completely lost track of time and surroundings. I was surprised to look at the clock and see it was 4am after the movie, which I'd only planned on watching until 3:30am. This is a movie so meticulously and efficiently constructed--there are only four characters, each one essential to reflect different parts of each of the others, but Karin stands out as a nucleus, with each of the male characters reflecting a different aspect of her reality as she deals with it. Martin, her husband, has conventional conceptions of how the world and family are meant to work. Minus, her young half-brother, represents the reality of instinctual, physiological need, and her father, David, represents the intelligent, horrifying, and perhaps useless analysing of reality and the recognition of the delusions everyone maintains to survive in it.

David says something to her that's now one of my favourite lines in any book or movie;

"You see, Karin . . . One draws a magic circle around oneself to keep everything out that doesn't fit into one's secret games. Each time life breaks into the circle, the games become puny and ridiculous."

Karin says, with genuine sympathy, "Poor little Papa." David says, yes, he his her poor little Papa because he is forced to live in reality. He's been forced time and again to face his true nature's incongruity with his self-image, or conception of how he had been conditioned to see people in the world.

The movie's beautifully filmed, too. It would have been ingenious as simply a set of dialogues written on paper, but the imagery, along with the incredible performances, gives the intellectual material elegance and organic warmth that assist the film's ideas enormously. 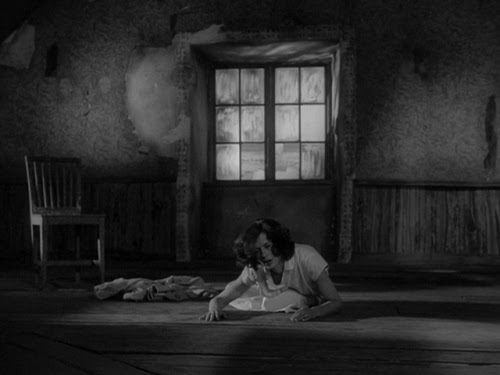 By the end of the movie, the conflict between the human need for a meaningful existence and the apparent randomness of reality are rendered perfectly and heartbreakingly, so that one character's expressed need for something in existence to hold onto and another's reply that faith in love is the best we have, I worried along with them at the tenuousness of it.
Posted by Setsuled at 8:58 PM
Email ThisBlogThis!Share to TwitterShare to FacebookShare to Pinterest