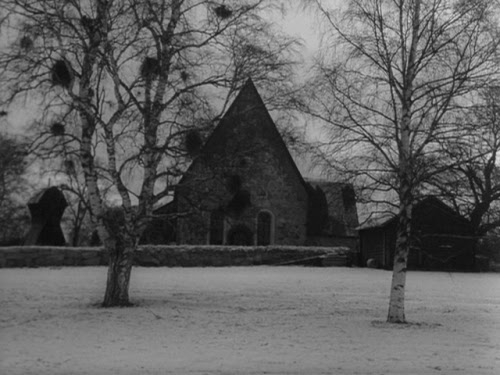 Both of these movies have been like hypothetical situations posed by philosophical essays in order to illustrate conflicts inherent to human thought and belief, except with beautiful visuals and incredible performances delivering these essays in a seamlessly credible, human fashion. Winter Light's argument concerns an idea with which the previous film concluded, that people need something to believe in to proceed through life without being overwhelmed by fear. Winter Light introduces a pastor who feels trapped by having something to believe in, and it seems to him that to escape his belief in God would grant him freedom.

The pastor, Tomas, associates his conception of God with immaturity, a benevolent being easy to believe in until he was confronted with the brutal reality of the Spanish civil war. Now he's stifled by a life forcing him through ritualistic motions for a deity whose supposed nature is inconsistent with the reality he knows. Over time, his meagre faith has atrophied his ability to empathise with anyone, leading him to feel dead.

The last portion of the film is the counterargument, and it's simply that human beings require love, love cannot be given without courage, and such courage cannot be mustered without some kind of foundation. An environment must exist where one does not feel that allowing oneself to love another is a hazardous venturing of one's entire being. Tomas may have found freedom from his juvenile faith, but the end of the movie sees him profoundly frightened and utterly at a loss as to how to proceed through the life he now has since he's found there's more to it than feeling dead.

The last movie in the trilogy is Silence, and I wonder if it shall in some way question the necessity of love. I look forward to watching it, and I hope it won't be another two weeks before I have time to.

Yesterday I went to Mission Valley Centre mall in the hopes of killing three birds with one stone. I told Arina I'd mail her a bunch of anime, so, since Mission Valley Centre has both a post office and a Target, I'd be able to get both a decent box for the job and some CD jewel cases. Then I'd sit down in the nearby Starbucks and work on the script for Chapter 18. Well, first the post office was out of boxes, then the Target didn't have any suitable jewel cases, and finally I found I'd forgotten my notebook.

So a large portion of the day was spent finding other things to do at that mall--somehow its video game arcade had reopened and I played Soul Calibur III for a little while, beating it rather quickly. I felt impressed with myself until I saw that my time didn't even appear in the standings, which were dominated by people who'd beaten the game in under five minutes, mostly using Kilik and Mitsurugi, as most guys are too homophobic to let other guys see them using female characters.

Then I got some vegetarian soba from the Japanese place and sat for a couple hours reading. Not a bad day, but everything I meant to do yesterday still needs doing . . .
Posted by Setsuled at 2:18 PM
Email ThisBlogThis!Share to TwitterShare to FacebookShare to Pinterest