Cat of the World 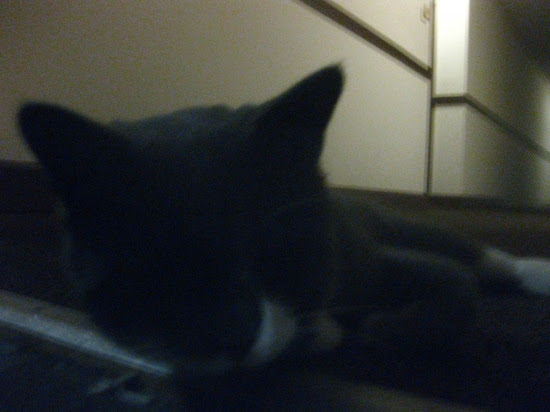 This is a cat called Magda. She was called Magda by my sister's friend who used to live in the building I just moved into. I see no reason not to call her Magda, too.

I took the above picture outside the laundry room on the second floor. It was the second time I ran into Magda, this time she immediately climbed onto my lap and tried to crawl into my coat. I asked a group of teenagers if she belonged to one of them--"No, that cat just wanders." said one guy.

A few minutes later, I asked a middle aged woman entering her apartment nearby if the cat was hers.

She explained to me the cat had been owned by someone who didn't pay the extra rent for the cat so it was put out. I think the extra rent is around thirty dollars.

I guess since Magda's been around since my sister's friend was living here means Magda can handle herself well enough. She does have claws, as I found out when I went to pet her when she'd rolled onto her back. Mainly she just seems to have unconditional love for humans.

It's raining to-day, something I didn't even realise until I went to take out the trash. So I'm spending to-day doing a number of things indoors. I put together a second bookcase, this one black that stands 40 inches tall. I'm starting to think I'll actually have somewhere to put all my books and movies.