The Animals in the Paint

I got a haircut last week at a place called The Hair Dock which is run by a guy named Mike who, in addition to being a barber, is a serious salt water sport fisherman. He's an older man, in his 70s, and I listened to him talking with another old guy waiting on the bench about going to this or that sea or bay and the various kinds of big fish they each caught. Mike was cutting a mentally impaired guy's hair in the seat next to me--this customer was bragging about how he had a toy race car decorated with Popeye characters for Popeye's 75th anniversary. But he liked Tom and Jerry better than Popeye.

"The only problem with Tom and Jerry," said Mike, "is they're all basically the same."

The old guy on the bench said, "Yeah, I remember when cartoons was just Disney and, uh, Elmer Fudd." Someone in the back of the shop said, "That's all, folks!"

"I don't know anything about that," said the other old guy.

"It's like, you remember that Johnny Quest?" said Mike.

Then the mentally impaired guy brought up Pokemon and the old guys groaned and immediately started talking about fishing again. 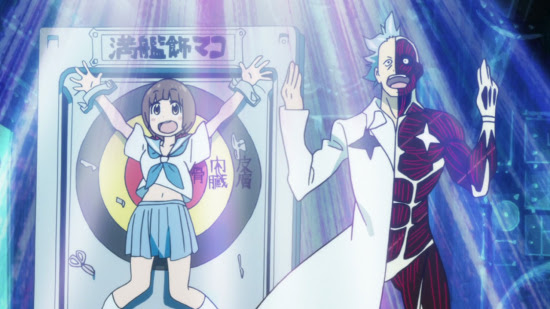 One of the criticisms I've seen going around about Kill la Kill, which I caught up with to-day, is that it's "too Loony Toons." I see people saying it has great animation but no plot. It's not hard to see what they mean by plot is the tedious bullshit used to inflate the cheap Slice of Life or latest Evangelion knock-off series, facile meditations on how stupidity is a virtue in women and collecting dully animated glowing items is virtue in all.

Yes, Kill la Kill is like Loony Toons and that's a big compliment. Instead of reinforcing a delusion that sanitises life into lobotomised gratification, Loony Toons, classic Disney cartoons, and Kill la Kill provide the viewer with a catharsis in exaggerated reflections of the common human experience. 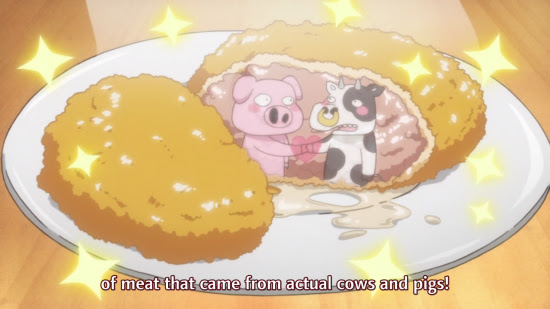 Bugs Bunny's and Daffy Duck's dealings with Elmer Fudd are often used as allegories for average people put upon by authority figures with plenty of absurd gags thrown in as a nod to the subconscious knowledge that all systems created by adults for themselves are ridiculous and in the long run meaningless. Bugs' casual thwarting of the baby-like hunter strikes a chord because Bugs is the true animal in the human while Fudd is a representation of useless human destruction motivated by delusion. Fudd seems like a baby because he's subscribed to a path of learning divergent from actual maturation. 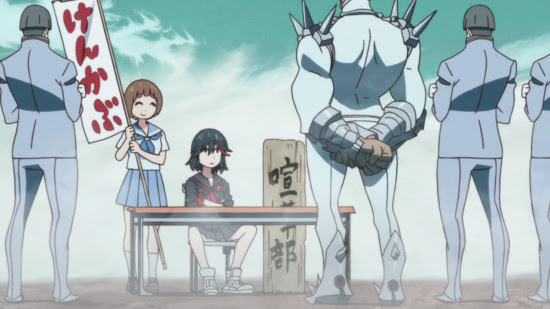 Kill la Kill isn't that different with its story of school uniforms as a metaphor for conformity. It's not coy with its fan service, forcing viewers to actually acknowledge they like the idea of sex--one can't mistake Matoi's outfit for anything but intentionally titillating. And I love Mako's family, the sloppy dad, brother, and dog and how all of them quickly adopted different personalities when they almost instantly became rich in the newest episode. 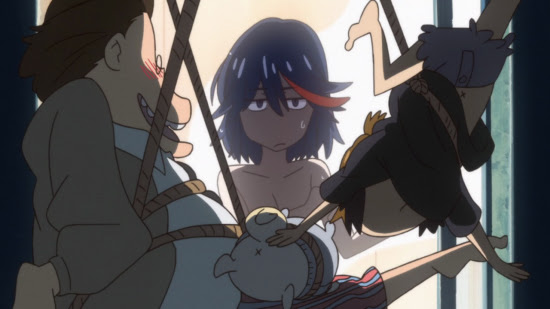 With lightning speed, the father goes from being a "back alley doctor" to someone who goes to expensive medical association dinners with high class call girls. The absurdity of the shift is in step with the funny, exaggerated dining habits of the family and the ridiculously imposing club presidents. It's all a reflection of fundamental human absurdity that can never be contained behind artificial habit or institution.

Posted by Setsuled at 4:18 PM
Email ThisBlogThis!Share to TwitterShare to FacebookShare to Pinterest