Of the over two hundred films he's starred in, supposedly Christopher Lee's favourite is 1968's The Devil Rides Out--this is according to Wikipedia which references as a source for the information an article which makes no mention of Lee's particular feelings about the finished film. But it is certainly one of the best Hammer films I've seen.

Unlike other Hammer efforts which are often confined to cheap and often garishly lit sets, The Devil Rides Out is a story of a secret Satanic cult among British aristocracy mostly shot in beautiful English countryside and in old, subtly lit manor homes.

Lee gets to play the hero for once here, which may be why he likes the film so much. In fact, he basically plays Gandalf, the role the lifelong Tolkien fan originally sought in Peter Jackson's Lord of the Rings films before he was finally cast as the villain Saruman. He plays the Duc de Richleau, a man possessed of a vast knowledge of black magic and the occult and yet quite Christian. He immediately sees the danger in one young friend's flirtation with the Satanic society. 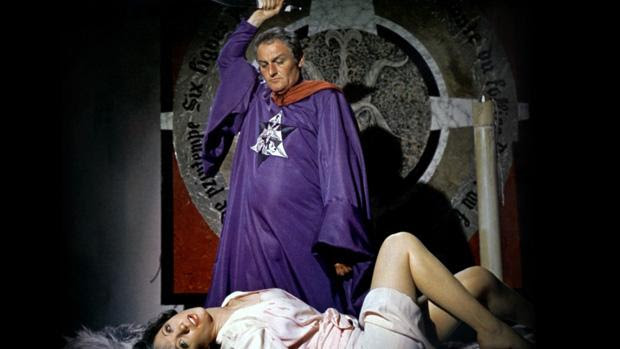 Charles Gray is in the film, too, as the leader of the cult. Here he prepares to sacrifice another would-be follower of Satan, Tanith (Niké Arrighi).

What works best about this film is its insightful exploitation of magical thinking. Lee's severe and committed delivery of de Richleau's instructions and warnings add to them a fearful weight. Rules that might otherwise have seemed arbitrary--like not allowing the potential Satanic acolytes out of bed or the need to stay within a specific chalk circle--become more impressive for the ambiguity when they come from Lee.

Much like Gandalf, du Richleau tends to give dire and urgent instructions before departing on some other errand, allowing the people left behind to struggle with whether or not they ought to obey what their rational minds might tell them is a bit silly. Lee's voice resounds in the memory giving terrible dread to the moment when someone does something as simple as allow a caller inside the house.