The first episode of the newest Monogatari arc looks promising. The conman who I didn't think was very interesting in Nisemonogatari has a cool running interior monologue in this first episode. I liked his opening lines, "People have an inherent desire to know the truth. That, or they want to believe that what they know is the truth."

The previous arc wasn't bad though it mainly focused on lolicon fan service. I'm thoroughly amoral when it comes to art--I don't condone any abuse of real children but I have nothing against people who get off on drawings of children so long as they don't hurt anyone. But for myself, I don't think kids are very sexy. I find them rather sexless, actually.

But there was one episode of the arc I thought was really great--Shinobu, the vampire girl who lives in the teenage vampire male protagonist Araragi's shadow--tells Araragi a story about the first time she came to Japan. She's blonde and wore a vaguely fifteenth century European gown before she was turned into a child. We're never told, but I guess she's meant to be European.

The story she tells Araragi takes place when she was still in an adult body and it's told in a visually interesting way, in the form of mostly still images that scroll by onscreen while Shinobu narrates. 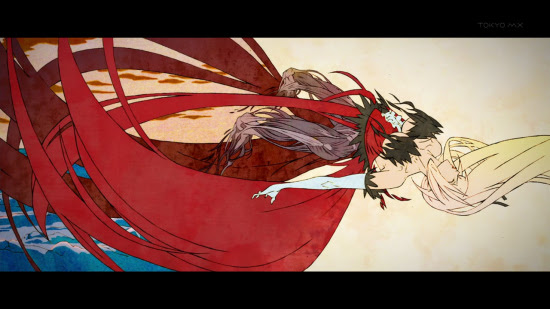 The arc is about how "oddities", supernatural beings, are devoured by a free-floating black nothingness if they don't behave like the sort of oddities they're meant to be. Shinobu, who at the time was known (somewhat incredibly) by the name Kiss-shot Acerola-orion Heart-under-blade, allowed some villagers to carry on under the impression she was a god and not a vampire, which drew the attention of the nothingness. 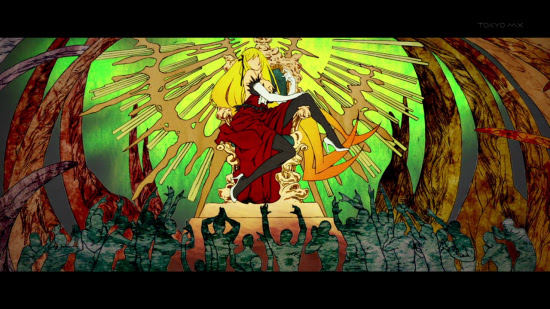 It's not a concept I find very interesting. Supernatural beings in fiction have power in the ways they reflect human feelings and bring those feelings to life. I don't know what it says when this reflection gets in trouble for not doing what I guess it was wired to do. It seems mostly like an enormous, unnecessary constraint placed on future stories. 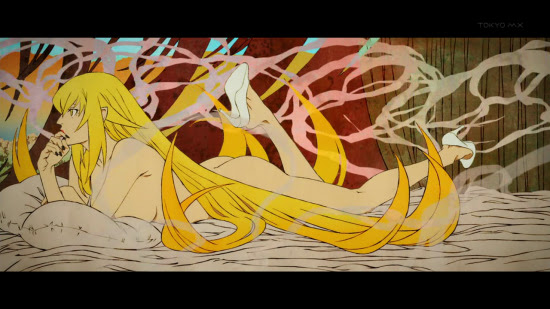 But still. Nice visuals. The drawings look like they come from a natural meeting point between art nouveau and ancient Japanese art. 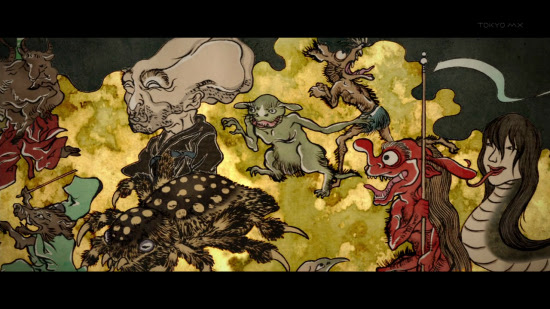