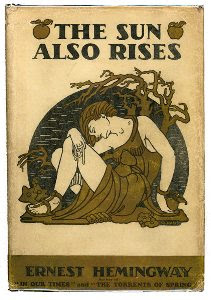 I decided to spend all day working on my comic to-day so I got an audio book to listen to, William Hurt reading Ernest Hemingway's 1926 novel The Sun Also Rises. I thought I'd never read it but what started as deja vu became a definite feeling that I'd read the book before. I have no memory of when or why but I definitely knew the book. It's not bad, anyway I like the narrative structure. I suppose that's been said.

William Hurt is an odd reader, his inflection often seemed wrong. Sometimes his tone would go up at the end of a statement like it was a question, sometimes he ran sentences together when it seemed inappropriate. But as I went on I got used to him. By the end I thought he had kind of a classy, Robert Mitchum-ish voice. I've seen him in plenty of movies; Hurt, I mean (I've seen Mitchum in a lot more). I remember he impressed me most playing against type as a gangster in David Cronenberg's History of Violence. He put on an accent in that and he doesn't hesitate from putting on the variety of accents in The Sun Also Rises with varying degrees of success. It was a nice way of keeping the characters distinct.

I love how much time Hemingway devotes to describing experiences that don't have any explicit connexion to the main plot, but then, of course, they do. Describing a day spent fishing with another guy he establishes his state of mind and gives an impression of the passage of time between the last time he saw Brett, the woman everyone in the novel's in love with, and the next. It helps emphasise the importance she has in the minds of the male characters too--something he gets closer to directly stating when he says, when it was just him and two of the other guys, it felt like six people were missing. I guess that's all part of Hemingway's "Iceberg Technique", where he deliberately doesn't directly emphasise important things. It's a good technique.

Not only have I read the book I feel like I've also read a lot about it. I do remember a class a couple years ago where the use of the word "nigger" was discussed. I think the book also came up when I took Women's Sexuality, I certainly remember hearing the Third or Fourth Wave Feminist angle on it in any case. Wikipedia has a section on its anti-Semitism. Maybe it's the way Hurt read it but I felt like some of the characters were anti-Semitic, not the book itself. The one Jewish character, Robert Cohn, even seems to be the protagonist at the beginning of the book at first and Hemingway gives him a pretty complex and even sympathetic backstory, talking about his time in college, his compulsion to take up boxing even though he didn't really like it. But the fact that he was good at it was good for his self-esteem--he comes across as a real person, not a caricature, anti-Semiic or otherwise. But that might be only because he's based on a real person. Certainly all the characters seem tolerant of anti-Semitism.

I'm not a fan of bullfighting, something that the action of the book revolves around, literally and thematically. I'm a vegetarian, though I generally say not for moral reasons--I've just never liked meat. But bullfighting seems excessively cruel to the animal. I could sort of appreciate what Hemingway says about the pride in the professionalism, how the crowd cheers more for the young, risk-taking matador over the more polished but careful one. It becomes an interesting way into discussing Brett's fascination with the boy. An integral part of the innocence that attracts her to the much younger man is the pride and skill he has in killing this magnificent animal. I suppose one could read into it an attempt to reconnect with a pre-World War I romanticising of warfare. There is something eerie and lovely about it. Bullfighters still don't impress me, though.