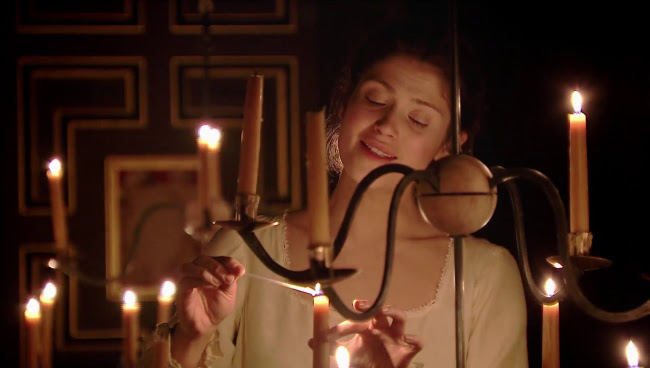 Theatre could be hard to see in the seventeenth century, particularly when it was indoors, because the lighting was mostly all candles. A 2014 production of The Duchess of Malfi recreated the experience of seeing the play at the Blackfriars theatre, being lit almost entirely by candles and what sunlight could come through the open windows. It's a fascinating way to watch a pretty good play, a tragedy written by John Webster in the early 17th century. Mostly it's a decent production though some of the performances are a bit over the top for my taste. 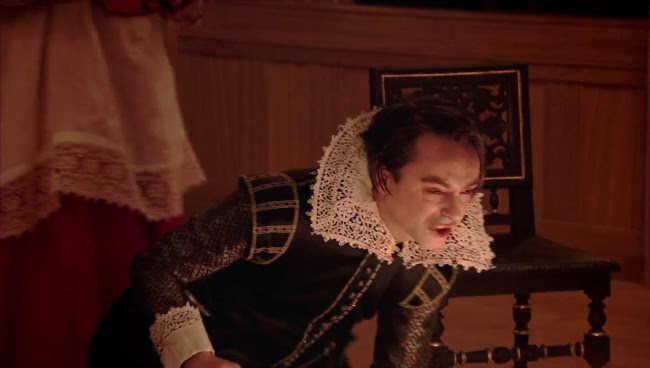 I've never seen so much drool come from a stage actor as erupts from actor David Dawson in his role as Ferdinand. To be fair, he is playing a character going mad though I would've liked a little more subtlety from him, even if he is a villain. The title character of the play is Ferdinand's sister, played decently in this production by Gemma Arterton, a widow who secretly remarries beneath her station. 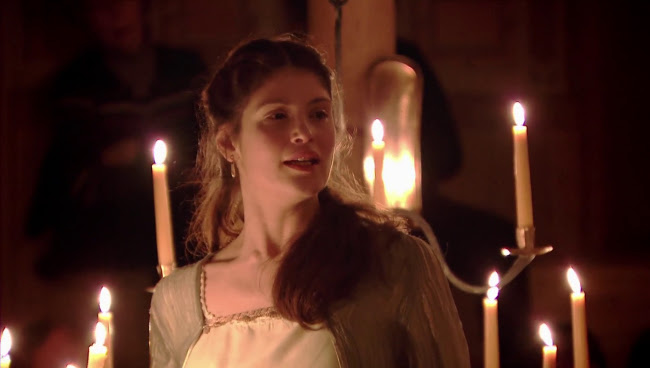 She has some nice soliloquys about the injustice of the limited freedoms women had compared to men when it came to sex and love though Fredinand is an exceptionally restrictive brother for the time. As the one presenting the opposing argument, about the importance of maintaining a good reputation, Ferdinand would make the play stronger with a less comically supervillainous hysteria than seen here. Though it's certainly in the text that he spectacularly loses his marbles. Some of his dialogue hits some impressively grotesque notes:

FERDINAND. The howling of a wolf
Is music to thee, screech-owl: prithee, peace.—
Whate'er thou art that hast enjoy'd my sister,
For I am sure thou hear'st me, for thine own sake
Let me not know thee. I came hither prepar'd
To work thy discovery; yet am now persuaded
It would beget such violent effects
As would damn us both. I would not for ten millions
I had beheld thee: therefore use all means
I never may have knowledge of thy name;
Enjoy thy lust still, and a wretched life,
On that condition.—And for thee, vile woman,
If thou do wish thy lecher may grow old
In thy embracements, I would have thee build
Such a room for him as our anchorites
To holier use inhabit. Let not the sun
Shine on him till he 's dead; let dogs and monkeys
Only converse with him, and such dumb things
To whom nature denies use to sound his name;
Do not keep a paraquito, lest she learn it;
If thou do love him, cut out thine own tongue,
Lest it bewray him.

DUCHESS. Why might not I marry?
I have not gone about in this to create
Any new world or custom.

FERDINAND. Thou art undone;
And thou hast ta'en that massy sheet of lead
That hid thy husband's bones, and folded it
About my heart.

DUCHESS. Mine bleeds for 't.

FERDINAND. Thine! thy heart!
What should I name 't unless a hollow bullet
Fill'd with unquenchable wild-fire?

DUCHESS. You are in this
Too strict; and were you not my princely brother,
I would say, too wilful: my reputation
Is safe. 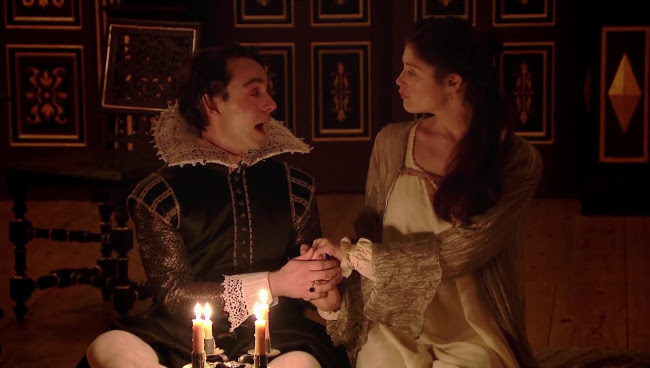 Later in the play, Webster's dialogue starts to feel more like pale shadows of stuff from Hamlet and King Lear. The connecting tissue for all the drama is a somewhat vaguely drawn assassin named Bosola, played by Sean Gilder in this production, who seems to sympathise with the protagonists even as he just kind of accidentally continues committing murders. He doesn't have that psychological knife's edge of Hamlet to come off as more than clumsy. And then there's lines like this:

We are merely the stars' tennis-balls, struck and banded
Which way please them.

Tennis balls? This is followed by another character saying;

In all our quest of greatness,
Like wanton boys whose pastime is their care,
We follow after bubbles blown in th' air.
Pleasure of life, what is 't?

Around a decade earlier, Gloucester in King Lear summed it up a lot better; "As flies to wanton boys, are we to the gods. They kill us for their sport." Maybe Webster really wanted to play up the sport part. 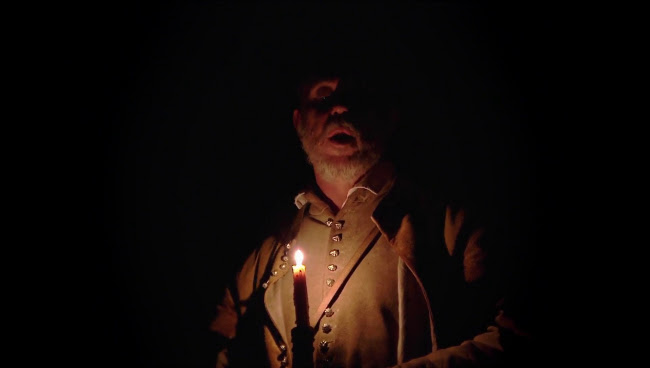 The candlelight is pretty great. In the 70s, Kubrick had to get special cameras from NASA to film scenes lit by candlelight, I'm guessing digital cameras have made things a lot easier. The actors have some nice business with the candles, too. 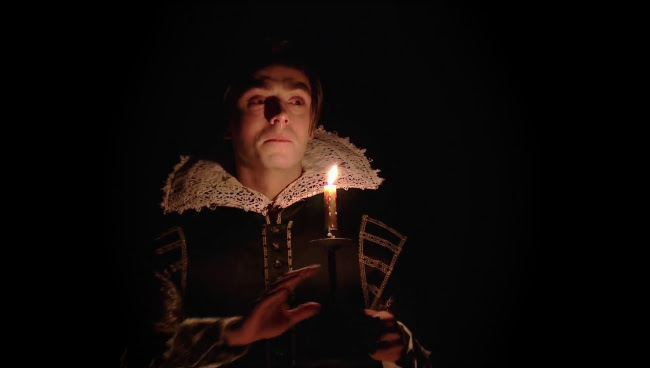 The production is hosted by Andrew Marr who makes an introduction with questionable statements, referring to Webster as Shakespeare's "near contemporary". Considering Webster's plays were written at the same time as Shakespeare's, albeit Shakespeare's later plays, I'm not sure what "near" is supposed to mean. More bafflingly, Marr describes Webster as the "Quentin Tarantino of the old English theatre" which makes me wonder if he's ever read Christopher Marlowe. Certainly Tarantino would've gone for a more convincing strangulation scene: 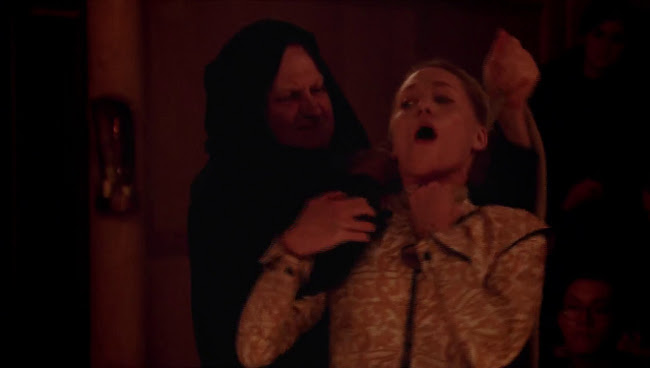 I really have to applaud Tarantino, Uma Thurman, and Diana Kruger for unsimulated choking in Kill Bill and Inglourious Basterds--and they're absolutely right, so often when someone's being choked it does look completely fake. I noticed one character's throttling by Thanos looked pretty convincing in the new Avengers movie, though I wonder if that was cgi. Kudos to the actor if he went that far though I still think that death was underwhelming.

A single spike was burned to monorail.
A mirrored two became another sum.
The masts were three, a single lateen sail.
Quadrupled "on" became a constant hum.
A row of standing men were numbered four.
A double pair of columns held the sky.
A cartoon hand displayed a finger more.
To mark again eleven makes a tie.
Recursive to the first the quarters were.
As simple slashes tally less than five.
Perplexing pattern plain the lines occur.
The fourths of self referred, an I, arrive.
A one as seen in vision fractured wide.
A lonely symbol takes its crowded side.

Posted by Setsuled at 10:31 AM
Email ThisBlogThis!Share to TwitterShare to FacebookShare to Pinterest
Labels: john webster, television, the duchess of malfi, theatre