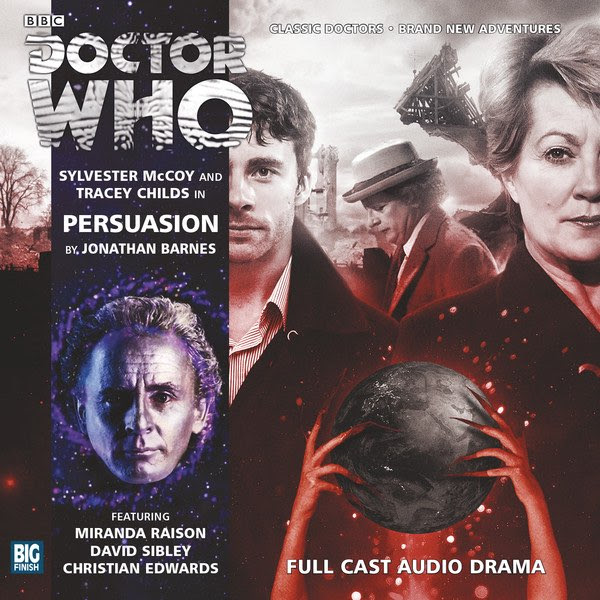 It seems the galaxy always needs sorting out because of people who think the galaxy needs sorting out. Luckily we have the Seventh Doctor who's doing something like that in the good 2013 audio play Persuasion. Starting with a pair of gods whose perfect benevolence is diminished somewhat when they're fighting for survival, the audio play moves in time and place to Germany in the aftermath of World War II and reintroduces the character of Elizabeth Klein.

Introduced in the 2001 Seventh Doctor audio play Colditz as a Nazi, Klein (Tracey Childs) became one of the Seventh Doctor's (Sylvester McCoy) most provocative companions in a series of subsequent audio plays. Sometimes written as a villain, sometimes as a reluctant pupil as the Doctor taught her the fundamental problems in Nazi philosophy, she certainly always held my attention. Mostly the writers avoided being too naive on her subject matter, sometimes she came off as too two dimensional to be a proper companion. In Persuasion, writer Jonathan Barnes sidesteps the issue by introducing an alternate incarnation of Klein, an Englishwoman who now occupies the Doctor's old role as scientific advisor to UNIT. But she clearly has some ties to Nazi Germany as when she follows the Doctor, like Alice following the white rabbit, into the TARDIS, he "accidentally" takes her to a hidden scientific facility in Germany where Allies are picking over the ruins for Nazi research.

In fact, aliens from all over the cosmos are turning up looking for Nazi secrets. Although this Klein has no apparent memory of travelling with the Doctor, the story does in essence pick up on their conversation about whether or not peace can only be achieved by a powerful central authority who believes in sacrificing the few for a potential improvement for the majority. The Doctor's eventual position on this is a little vague, which was possibly inevitable, but it's a nice story. Set evidently just before the 1996 TV movie, this is a Seventh Doctor who somewhat resembles the one seen at the beginning of that, and it sounded like it was the 1996 TARDIS interior, too--though another companion, Will (Christian Edwards), introduced in this one, describes the interior as though it were designed based on a movie adaptation of The Time Machine than by anyone who'd actually read the story, which sounded like a dig at the 1996 TV movie to me. Which I enjoyed--the only good thing to come out of that movie was Paul McGann, in my opinion.

Posted by Setsuled at 9:44 AM
Email ThisBlogThis!Share to TwitterShare to FacebookShare to Pinterest
Labels: audio play, doctor who, persuasion, seventh doctor, sylvester mccoy